After my doctor appointment yesterday, we took the girlies to McFastfood so they could have ice cream and play.

I've been a little leary of the McPlayland ever since our horrifying bout with headlice, but they've been there a couple times since with no repurcussions (not to mention that they were there like, a thousand times BEFORE they ever had any problems).

I wasn't feeling too swift, so I remained firmly in my hard red and yellow chair, nursing my cup of Newman's Own coffee, but Mulletman swung his tall, lanky frame up into the play tower. As he was climbing up the steps he found himself face to face with a three year-old cutie named Logan.

Apparently, the last time "Wogan" had been to the playland, he'd needed his Papa's help to climb up into the tower, but now he'd mastered the art of DOING IT ALL BY HIMSELF!

While I was chatting with Logan's grandparents I felt a weird warmth come over me. Suddenly my telepathic powers swelled and I became what I have always dreamed of becoming - a powerful space alien! On the planet Argonia, I was given the choice commission of coming to Earth undercover as a simple stay-at-home mom in Maine. Once I established myself here in the community, my assignment was to kidnap a variety of humans and bring them back to the Argonian council.

Right there, in that nasty, lice-infested (probably) Mcfastfood play area, I knew the time had come; No more pretending! I spotted a tall, lean man with long curly hair darting about in the upper reaches of McFortress. Clearly he was trying to hide from me. However, his feeble attempts to escape detection were no match for my Argonian perceptions.

I followed his movements with my mighty mind until he emerged near the McCar. There I pointed my finger at him and ZAP, a direct hit! A look of stunned surprise encompassed his face as he fell to the mat yelling out something about "a deathray". Foolish human, I only use the deathray for obnoxious salespeople! No, this was my mind command laser. The McMulletman was now in my complete control. Bwa-ha-ha-ha-ha!

I forced him to expose his two stealthy, feminine McCohorts. They moved so quickly and stealthily on their own, that it was difficult for me to target them without assistance. I had the McMulletman bring them, one by one, into the open area and distract them by tickling them. My planned worked! I was able to strike with no resistance on their part.

I commanded them to come down, all the while maintaining my cool front with Logan's family. Coats on, shoes on - they obeyed me cheerfully. It looked just like one of those mom-is-tired-of-McFastfood-and-is-ready-to-leave scenarios. No one suspected a thing! I needed to get them out of the McFastfood and into my Mercury before the kitchen microwaves disrupted my superior control. At my bidding, the prisoners left the building and climbed into the vehicle, totally clueless to their fate.

I secured them into the vehicle with my Manacles of doom. Now there was no escape!

I obliged them to drive me back to earth base. There they slaved for me, cleaning bathrooms until I called them into the torture chamber and forced them all to eat the tasty meal I had prepared. Two bites of my cleverly disguised Buffet Chicken Casserole and they all realized the truth: I was indeed trying to kill them.

One by one they wilted at the table, and I was able to transport to Argonia to be my slaves forever.

I am not having a contest. This is because I have nothing that I want to give away right now, except maybe some leftover (LOTS of leftover) Buffet Chicken Casserole. Instead, I shall point you toward this mixer giveaway:

A Cowboy’s Wife is having a contest on her food blog! You can win aHamilton Beach® 4.5-qt. Eclectrics Stand Mixer and she’ll ship anywhere so everyone is eligible! 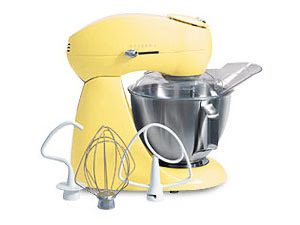 From Hamilton Beach’s “Eclectrics” line, this all-metal stand mixer comes with a host of accessories - a Flat Beater for cakes and cookies, a Dough Hook for bread and a Wire Whisk for whipped cream or pudding. The 4.5-qt. stainless steel bowl comes with a Pouring Shield that helps prevent splattering while in operation. The pouring shield has a built-in chute for adding ingredients. Powered by 400 watts, the stand mixer has a two-way mixing action to ensure all ingredients are incorporated into the mix. The quick-release, tilt-up head assists when removing the bowl. 9 x 14 x 14-in. When you’re ready for a kitchen re-do, don’t call in the carpenters! Instead, “counterscape” your kitchen with Hamilton Beach’s retro-designed, affordably priced electrics in happy, sun-saturated colors. Their “Eclectrics” line includes updates to those classic appliances from the 1950s. All of their “Eclectrics” are available in six colors: Apple Green, Moroccan Red, Pineapple Yellow, Intrigue Blue, Sugar White and Licorice Black.
Posted by groovyoldlady at 6:51 PM

Using a McRestaurant as cover to capture your slaves, you wily genius. No wonder we mere earthlings can't stop you.

How is it that the kid with the speech impediment always has a name he/she can't pronounce? Hope Wogan grows out of it.

I might try my own slave capture at McDonald's today. Very, very clever.

I want some of that coffee...

And you'll be happy to know Groovy, I am updating my site to include RSS feeds AND 'remember me' functionality. Of course you do know that this will cost you... you are now required to be a friend for life... or at least until I get bored of you... (I think I know which will happen first)

Groovy, you're one McGoofy gal. :)

Laughed out loud about the frozen rodent in the check box in your freezer for three years.

so if the kids get creepy crawlies iln their hair at the place are they called McLice?

I really don't like that place, but the kids sure do - so noisy and smelly! But I remember when Anakin was afraid of it too - reminded me of "Wogan."

Welcome Rainbow! and the answer is McYes! and when you get them you go McCrazy and McInsane and become McSleepless!

This is my first time visiting, but it won't be my last.. you had me rolling on the floor with your mind control ray. I needed one of those!! Hmmmm.. wonder if it will work on business partners?????

WOW! I have finally realised that it's not an Evil Voice after all. It is my alien side trying to make me return to my home world.

I must go get some McSlaves of my own now, this house needs a major McClean!

I knew that once I revealed my true self, more readers would come.

How much fun life must be around you, Groovy!

Hello there my McGroovy friend! I consider this post an entertaining read! Your creative mind/writing amazes me! Thanks!

Sorry Groovy, but since you've been pointing at me I've felt compelled to say those things.

What was in that Newman's Own coffee? ;) Too funny.

My son, to this day, calls it my "mother face" and "mother finger"--it seems to work on hubbies too (sometimes not even my own, but just lost men in the vicinity). I didn't realize it was because of that old alien abduction thing in my youth that transformed me--I think it was called "the rite of marriage"--followed later by a birthing act right out of ALIEN (the movie)!