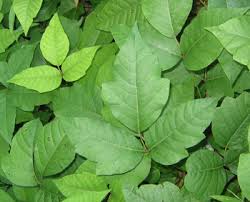 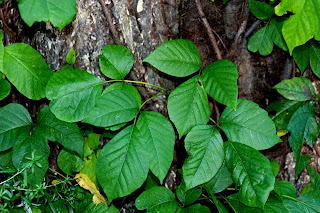 Ahhhhhhh, ain't them some pretty plants?  Of course they are!   However, if you are an astute nature lover, you (wisely) run screaming when you espy this particular beauty anywhere near you.

I am particularly sensitive to the evils of this lovely bit of herbage.  Sadly there is (was) a HUGE patch of it right next to our goat pen.  It is a lush, stunning green patch of pure evil!  There are several trees and large tempting rocks right in the patch.  And did I mention that it is RIGHT next to the goat pen?

Girly-Girl was never bothered much, but Silly-head and I have gotten rashes several times from errant goats.  When we have our wits about us, we will catch those naughty caprines and give them baths before they go back in the pen - and then scrub ourselves like mad.  But oh what a nuisance...

So this year I went all out and declared DEATH TO POISON IVY!

I cannot and will not use poison on this patch. It is right next to the goat pen!  (But you, of course, already knew that.)  I can't take the chance of toxins blowing into the pen or of escapees wading into a field of death and eating their way to an early grave.

Folks have told me to just let the goats eat it down.  That would be a possibility if we had meat goats that we weren't handling much.  But we have dairy goats and we handle them and work with them pretty much twice a day every day.  The goats are not the solution.

In April, just after the snow finally melted, I got angry and determined.  I got the credit card.  I bought tons (figuratively) of black garden plastic. I bought thousands (figuratively) of little staples to hold that plastic down and I covered every square inch (literally) of that horrid, nasty, disgusting poison ivy patch.  It took me over 8 hours to get the plastic down.  It is overlapped in strategic ways.  It winds around the trees and rocks.  It kills, KILLS the poison ivy.

Of course, even though I tried to be VERY careful, and even though I performed this feat of daring-do before the plants even came up I still got poison ivy.  And I got it pretty bad because when one is angry and determined one might be just a little too aggressive in pulling evil out BY THE ROOTS!

I've been through 2 rounds of steroids and still have some rashes and itching.  But it is SO worth it to look out and see a safe place for my furbabies to play!  And it looks so nice -especially after I spent another 6 hours digging out muck from the winter muck pile and hauling it over to thickly mulch over the plastic.

Now I go out at least once a week and survey the area because I know poison ivy and I know it will try to strike back.  I know it will send out shoots and try to spring up around the edges.  I was feeling pretty smug because there's been no sign of it.  Sadly the day before yesterday I found a new small patch about 6 feet out from the huge one I worked so hard.

Just so you know, it is gone now.  Smothered.  Because I am dangerous when I am angry and determined!!!!!!

Now I need to call my doctor about this itchy rash...

Posted by groovyoldlady at 1:22 PM

I've never had it, but our oldest son use to be attacked by it terribly.

*knock on wood* I haven't gotten poison ivy in forever. Hope it's cleared up by now! - Tara

Hello Everybody,
My name is Mrs Sharon Sim. I live in Singapore and i am a happy woman today? and i told my self that any lender that rescue my family from our poor situation, i will refer any person that is looking for loan to him, he gave me happiness to me and my family, i was in need of a loan of $250,000.00 to start my life all over as i am a single mother with 3 kids I met this honest and GOD fearing man loan lender that help me with a loan of $250,000.00 SG. Dollar, he is a GOD fearing man, if you are in need of loan and you will pay back the loan please contact him tell him that is Mrs Sharon, that refer you to him. contact Dr Purva Pius, call/whats-App Contact Number +918929509036 via email:(urgentloan22@gmail.com) Thank you.