A Blizzard of Groovy Thoughts

I have written SO MANY blog posts in my head in the past 2 months.  Unfortunately, none of them made it through my fingers onto the keyboard.  Here's a shortened account of the blizzards of 2014-2015.

December was WAY crazy and stressful and wonderful.

I knew Scout was coming, so we were prepared for that.  But then GrammaJ felt like the Lord told her she needed to pay for plane tickets for Funsocksgirl, the J-Man, and Master Andrew to come visit us from NY.  She wanted to keep it as a surprise from the whole family, but she had to clue me in because she needed help.  There was an exciting but stressful flurry of making a money transfer, confirming tickets, borrowing a carseat, highchair, and pack-n-play AND a van to pick them all up at the airport -all without arousing any suspicions. I even had to pretend I was going to mail them their gifts, etc.  Then we had to design a ruse for going to the airport to pick them up which is an hour-and-a-half away.  'Twas very stressful and exhausting - but oh so worth it!  Not one person caught on!  It was so awesome to see each person's face when they finally saw the kids!

Master Andrew kept us all laughing.  He turned 3 while he was here and we had so much fun with him!  His great grands hadn't seen him since he was a wee baby, so the visit was extra special for them.

And I got have ALL FOUR of my kids together for a holiday - a very rare treat!

We packed SO much celebrating into the visit:  Andy's birthday, Grammy's birthday, Christmas, sledding, brother/sister dates, board games, card games, dominoes, oodles of food, visiting the grandfolks and daily visits to Scouts beautiful children in a distant town.

The J-Man, Funsocksgirl and Master Andrew arriving at the airport! 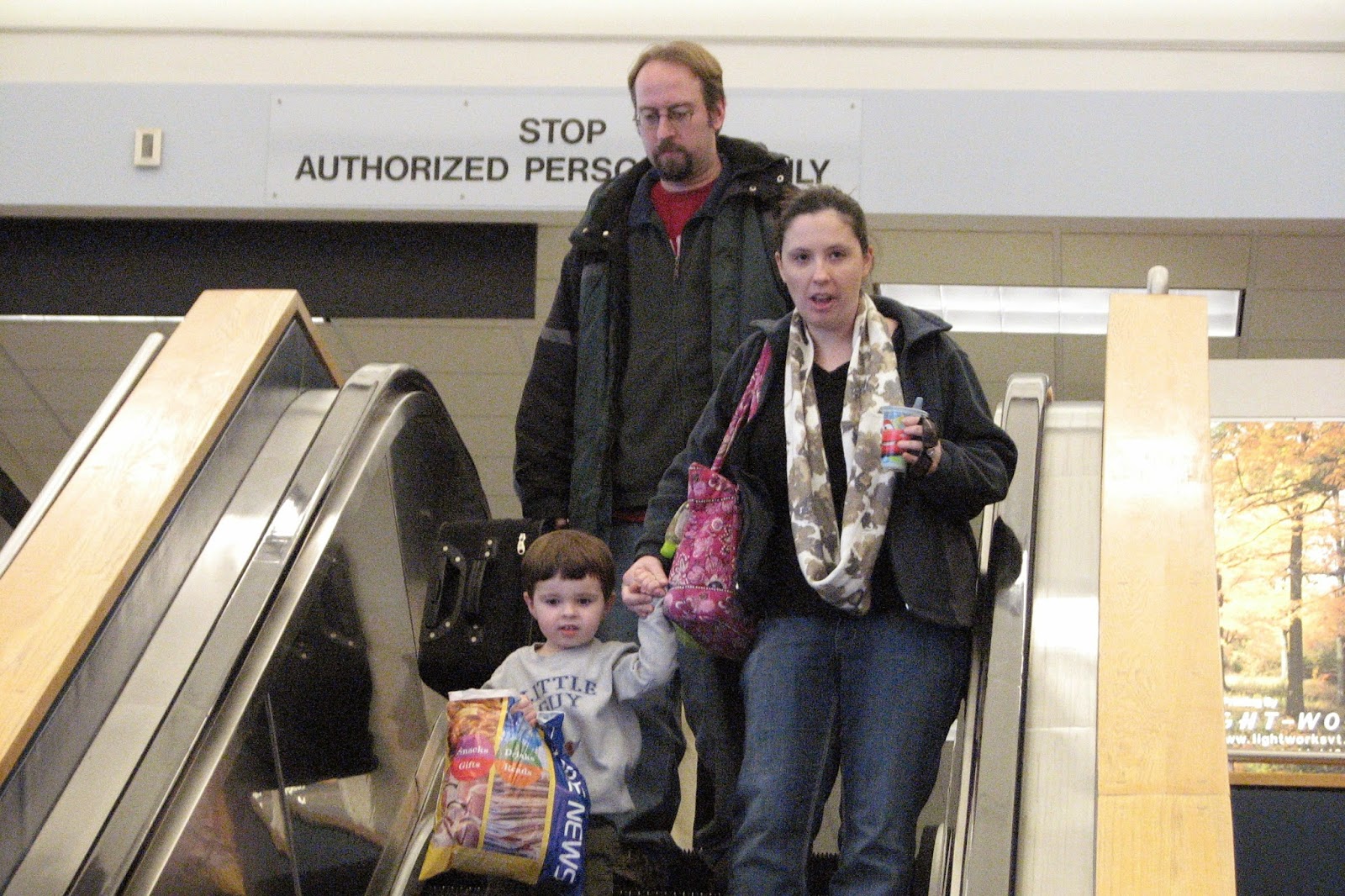 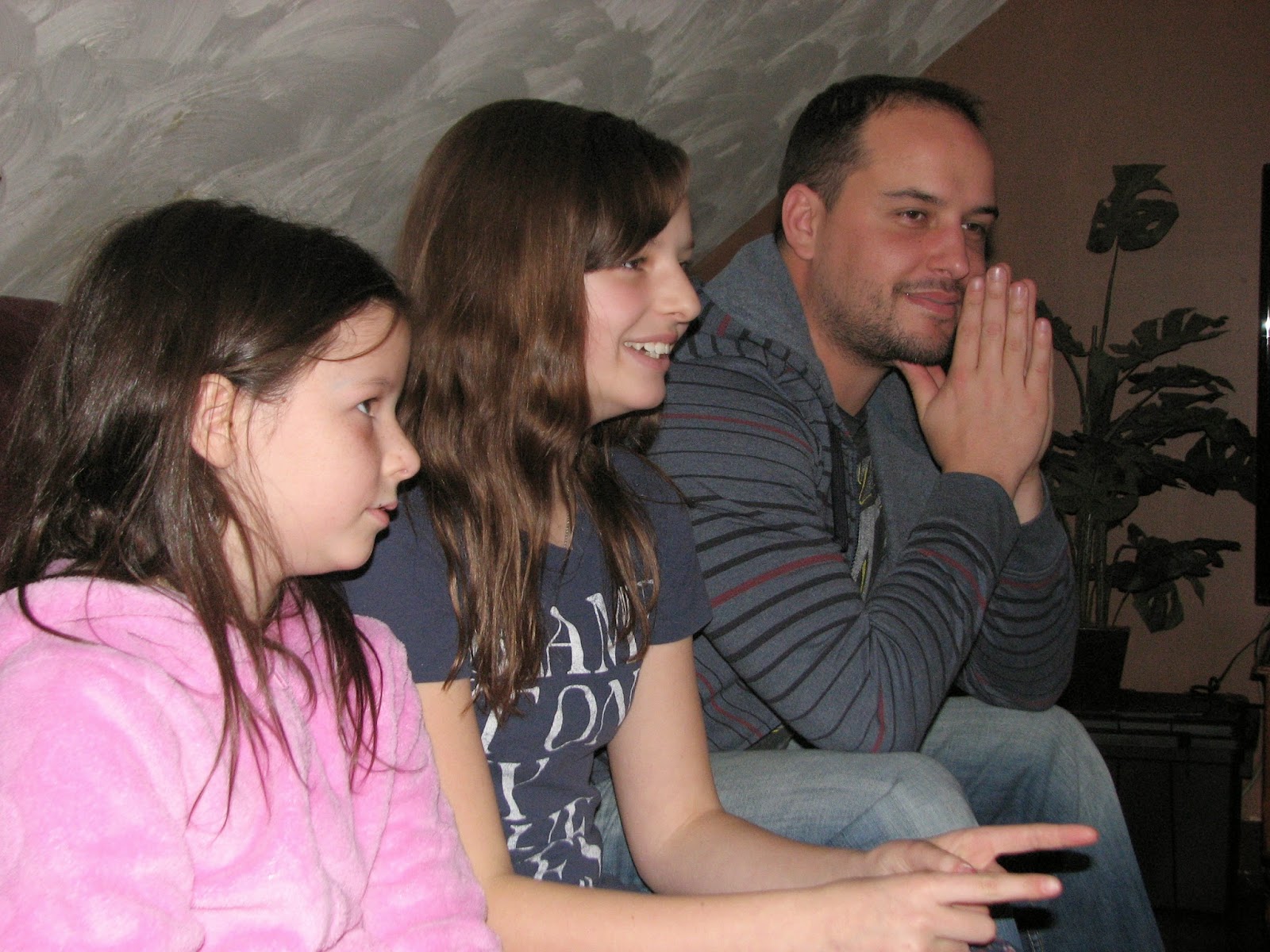 Scout and his son, Ji-Ji 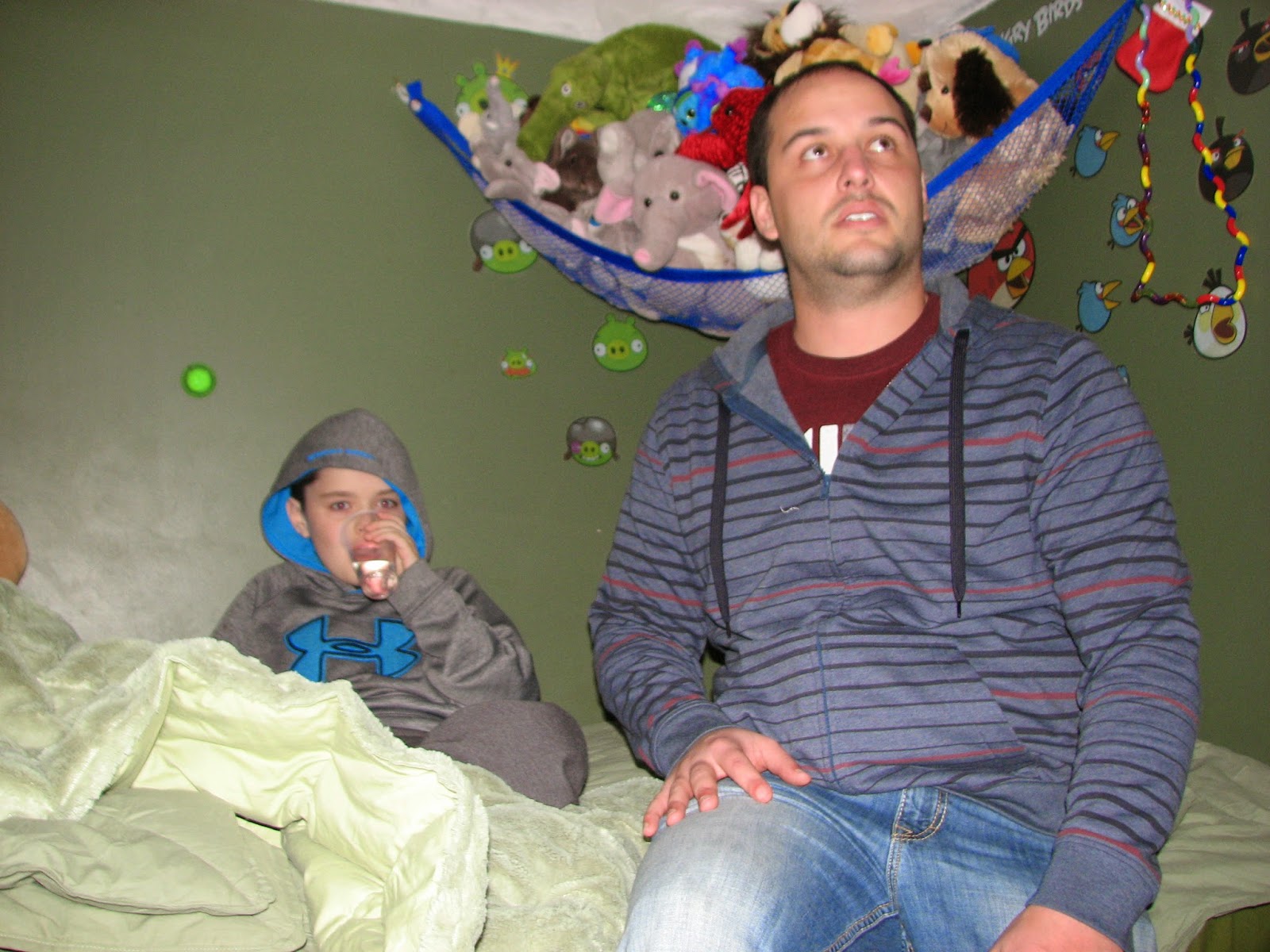 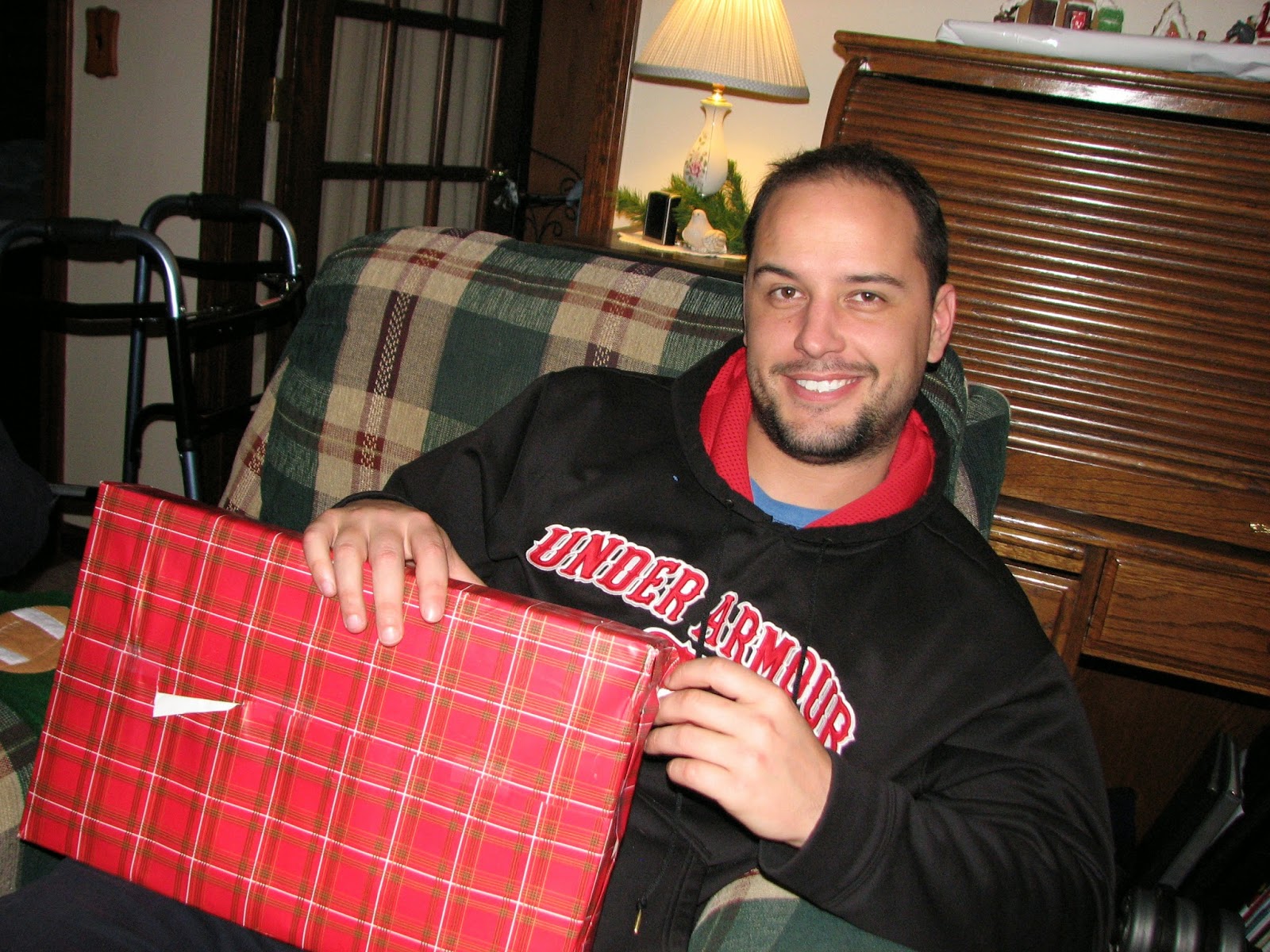 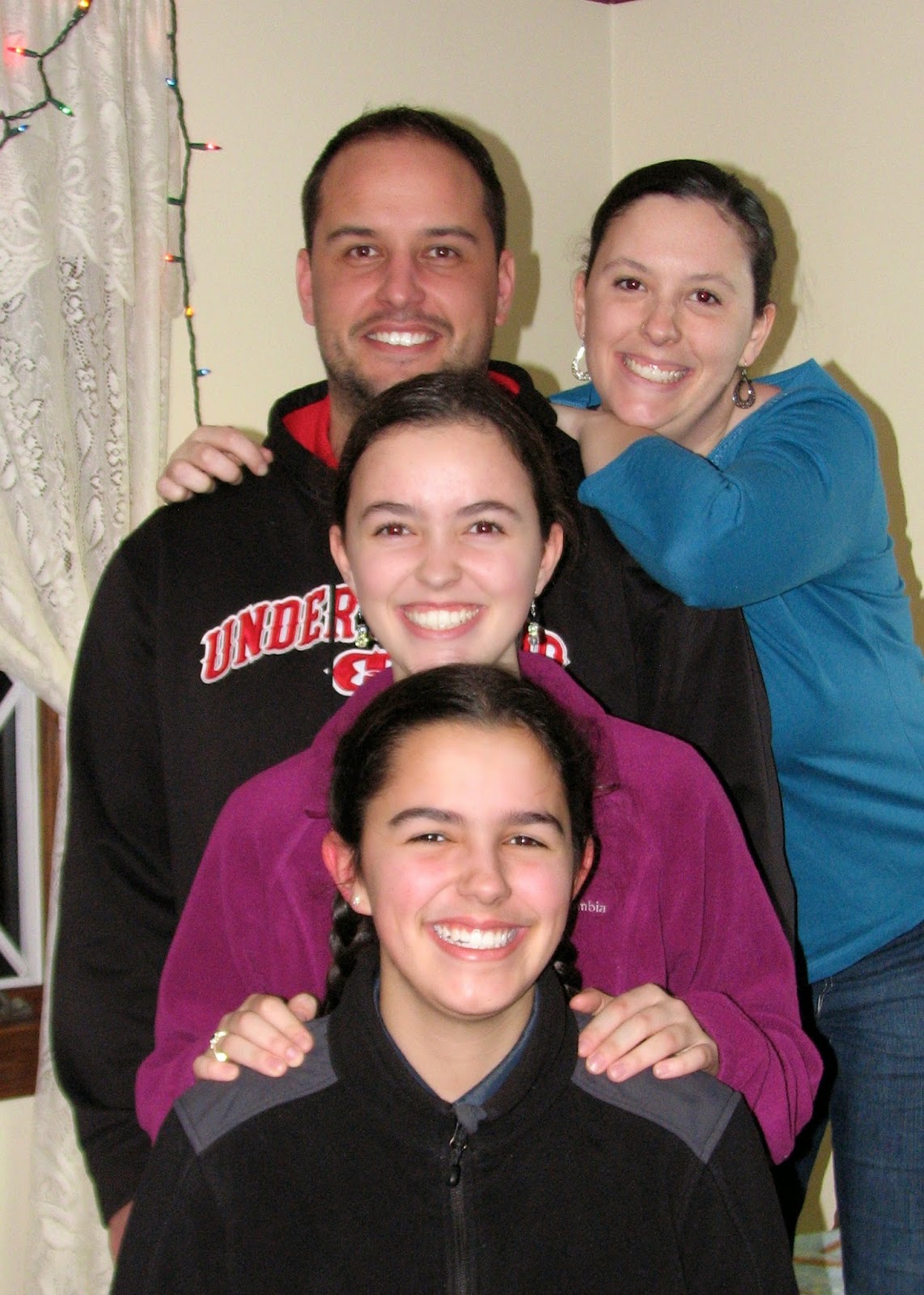 *************************************************************
Once everyone left, we got about a week and a half of respite before the January blizzard arrived:  Grammy had a stroke.  Long story short, she is currently in her final stages of rehab and should be home in a couple more weeks.  God has mercifully allowed her to recover and the lasting effects of her stroke are limited to fatigue and a blood pressure that tends to drop.  We are very grateful that she is doing so well!  However, it has been a month and a half of hospital visits and worries over Grampy (Grammy is his caregiver) and phone calls and family pow-wows.  We were extremely thankful that the BHE's brother was able to fly out from California and stay here for most of January to help us all through the worst of the storm.

On a much different front, GrammaJ decided -after 8 years of no vehicle -to buy a car.  She bought it the day after Grammy had the stroke.  And, in her desperation to be free and independent, she bought too quickly and got shafted.  The car has been nothing but a nightmare.  I may share details later, but if I do now, my blood my boil over on the keyboard.  Instead, I'll just say that she needs a financial miracle because - oh mercy -the repairs that are needed!

In other news, all my whining about the goaties was totally unecessary.  God has, indeed, chosen to enlarge our herd; We are now CONFIDENT that all 3 does are pregnant!   HUZZAH!!!!!!!

What a blessing after all the storms...

Posted by groovyoldlady at 3:52 PM