It Was a Nightmare!

GrammaJ, bless her heart, is a bit given to hyperbole and exaggeration.  Back in the days when she lived several states away, she was known to call us frequently.  She'd dutifully wait for the answering machine because I screened my calls.  Then she'd say, "Groovy Lynn (She always uses my middle name)!  Can you pick up the phone, PLEASE!  It's an EMERGENCY!"

Naturally, if I was there to hear her plea, I'd rush to the phone.  Once in a very great while there was a matter of true import, but much more often her "emergencies" were more of the "What temperature should I bake this cake at if I use a square pan?" or "How do I clean a spot off of leather?" or "I'm trying to write out a wonderful recipe I made up: How do you spell zucchini?"

Needless to say, after a while I was a bit slower to respond to her "emergencies".  I would always call her back, but I didn't always rush to do it!

She is also noted for her strong opinions.  A person is not a mediocre hairstylist.  She is, instead, the "absolute worst hairstylist EVER".  That store manager is not just nice; "He's such a wonderful young man!  We've bonded!  I've adopted him as your brother!  He should be promoted to CEO of the company!"

And let's not get started about food...

She's a picky eater at the best of times.  Give her a cookie that is less than perfect to her tastebuds and you are instantly a "lousy cook".  A meal is not just so-so; It's either "wonderful!" or The "most horrible meal" she's ever had.  There's simply no in-between for GrammaJ.

Are these things good?  Are they fun?  Are they right?  Nope.  But they're not nightmares.

Just yesterday, GrammaJ was in a really bad mood - very negative. So the girlies and I set about to cheer her up.  I'm happy to report that between yesterday and today she cheered up marvelously.  But before the change in mood came she got the opportunity to tell the people at the store just what she thought of my Honda Element.  "This car is a NIGHTMARE!  My daughter is so sorry she ever got it! The suicide doors are so awful they make you want to COMMIT suicide!  And it only seats 4 people!  And the seat is too high for me to climb into!  And they have have BRAKE PROBLEMS!  It's a NIGHTMARE!"

Now, we own 2 Honda Elements.  They are not my favorite cars.  We have had some brake problems and the suicide doors are a huge nuisance.  The cars only seat four with seat belts.  But both the cars run really well and they are quite roomy inside.  There's no carpet in them so they're great for transporting plants and goats.  They are, as the BHE likes to call them "practical vehicles".  They are not my preference for a family vehicle, but they both get the job done and they are, most decidedly, not nightmares.

The girlies and I got to talking about this last night and, as usual, talking turned to giggling as we considered what it would take for our car situation to actually be a nightmare.  First of all, my car would have to be parked between a motorhome and a big, ugly truck full of raccoons. 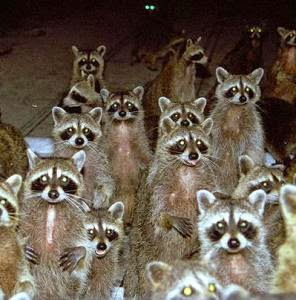 I would need to try to get my gigantic economy pack of 50 rolls of toilet paper into the backseat of the car even though I can only open the doors 4" because the truck and the motorhome (Which has a vicious barking dog inside) are parked so closely.  And the raccoons steal my hat.  And there's a tornado approaching rapidly.  And the static electricity in the car keeps shocking me.  AND I have to pee really badly and the only place to go is on the toilet in the back of the truck with all those raccoons that just turned into maniacal chattering monkeys that are sealing all the groceries in my cart.  And I have a parking ticket.  And some hoodlum runs off with my 50 pound box of chocolate while I'm pinned between the cars. And I'm standing there in my underwear.

And the next time GrammaJ misuses the term, I may just fill her in.  ;-)
Posted by groovyoldlady at 8:05 PM

Yep, that is a nightmare!

Oh Michelle, I LOVE the stitching! Especially the one with the names of Jesus. Beautiful! And the moon and clouds are pretty and Sylvia is very silly. I love kitties!