Yes, my friends, after a two month wait we finally have hamsters!

Meet Bekah and Ruby, our two new family members. Girly-Girl and Silly-Head named them after their older sister and her car. 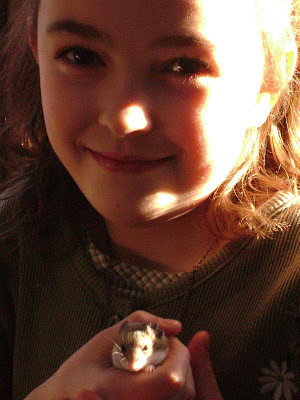 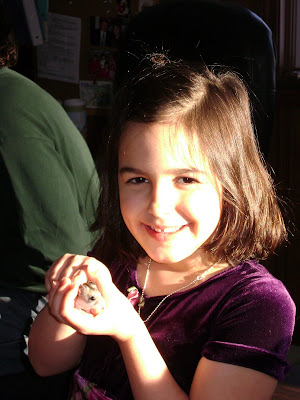 Bekah and Ruby are Chinese dwarf hamsters. Most dwarfs (at least in the hamster world) can be a bit persnickety and nippy. We didn't want the little girls getting their fingers bitten, so we decided against the other dwarf breeds. And the ladies insisted they wanted TWO hamsters in ONE cage. If you're familiar at all with hamsters, then you know this is not usually a good set-up.

This is because your basic hamster does not share well and typically eats the competition.

However, Chinese dwarfs are quite happy sharing a cage with a same-sex sibling AND they are calm when you hold them AND they aren't curmudgeonly, so they were the perfect choice.

The girls already adore them and have had them out of the cage several times to love on them and play with them.

Might I also add that Chinese dwarf hamsters are very hardy! They also look exactly alike, so in truth, we never know who is who or which is which. But it matters not for they are both sweet and adorable and furry. 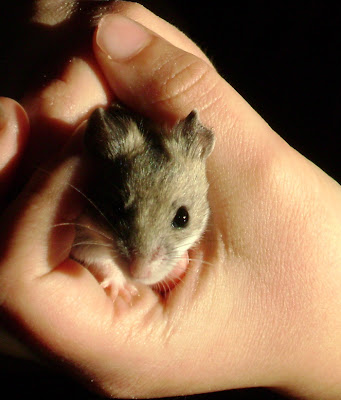 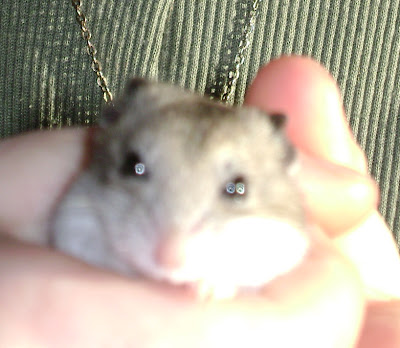 And....the girls picked their own outfits for church yesterday. I think they have a fine fashion sense, don't you? 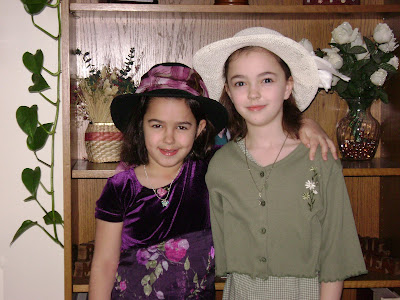 Posted by groovyoldlady at 7:19 AM

Oh, they're darling! (The hamsters, too!)

Yes, all the ladies are darling. The ones in dresses, especially. I have the answer to the identical hamster dilemma...sharpies! I think they need tatoos. Wha'dya think?

How cute! I followed you over from Heather's spot. Did you know that Growing in Grace accepts pet pics for Pet of the Month? Girly Girl should send this in!
http://growingingraceonline.com

The adorable girls look adorable in their outfits for church!!!!
Glad I'm past the hampster, etc. stage!!!!
Susan

O but Susan, I LOVE animals - even rodents. I enjoy them every bit as much as the girls do!

You've got some serious cute overload in the groovy household.

Makes me want rats again, dang my husband for not liking rodents.

So glad your girls got their hamsters at long last! They are indeed cute...but not half as cute as your little girls!
(And my girls have similar styles when they dress up!) So wish we could get together for a big play date...you're only completely across on the other side the continent, that's all...;)

I don't care how you describe them... they're still rodents. Oh I don't mean the kids...! Although with my kids I did wonder sometimes.

THose little guys are adorable...oh and the kids too.

Awww, soo cute. I had a hamster when I was a kid. I loved that little guy. Hope your girls have many wonderful years with theirs. Oh, and what lovely outfits!

Aww, they are so cute. I used to breed Chinese hamsters. I have lots of other animals now though.

Have a lool at my site and tell me what you think, and maybe you could could add me as a friend.

Thank you. I was really lucky, I had what's called a Black Eyed White Chinese, which are extremely rare. You cant breed for them, they just appear. She was very pretty.

Here's a picture of her.

Sorry, I dont know how to add the html to get the link working, so all I have is the link itself.

Sorry I couldnt get back to you earlier, was a bit busy yesterday. She was a special little girl and famous too. She wasn't just rare in the sense that there are only a few born every so often, but she actually gave birth to a couple of litters, and these hamsters are usually barren. I was so pleased.

would you like to share a link, if you put my link on your site I'll keep your on mine. Would that be ok?