Neurons are Firing and the Thoughts are Random

Groovy Mom Goodness! Why in the world do you suddenly hate Christmas?

Silly-Head: Because all the cups look the same!! 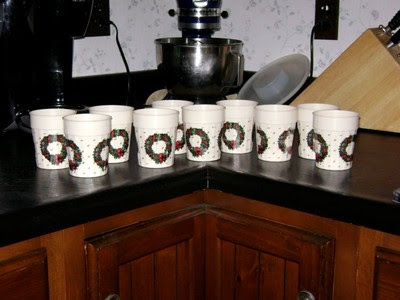 On the next to last Saturday before Christmas.

On a Saturday before a predicted hugely bad winter storm.

Actually, it wasn't that bad. We went to the Mart first to buy odds and ends. At 9am it was already packed, but folks weren't too cranky yet because it was still early. I knew beforehand that it was going to be insane, so I just decided that I absolutely would NOT complain, whine, or grump at anyone. Instead I got things down for people, helped them find what they were looking for, smiled and laughed alot (usually at myself). You know what? If you are cheerful and kind and polite it does much to encourage other folks to be the same way.

My Mom just gave us her autoharp. I have wanted an autoharp for years and years and YEARS. I'm am incredibly tickled to have it!! She can't play it because she has some serious problems with her hands and can't hold a pick. I'm gonna tune it up so we can strum through lots of Christmas songs on Christmas Day with her!

Joy to the world, the Lord is come...

I finally mailed the Christmas packages this morning. Plan A was to mail them Thursday, but we couldn't because we didn't have a box the right size for Scout's gifts and because GrammaJ wanted to make her peanut butter potato candy to send to him and Funsocksgirl. She has to make it here because she needs a mixer to do it and she wasn't coming over until Friday morning.

Plan B was to mail the packages friday afternoon. GrammaJ had a box that could be cut to size and her candy would be done. We got the candy made and everything packed up but then the hospital called. They wanted Silly-Head in to get her stitiches out. NOW. Apparently we were wrong in thinking they weren'r sposed to come out until Saturday. Mulletman ran out with the packages fully intending to mail them after the hospital run. But it was a HOSPITAL run, you know what I'm saying? They didn't get out of the E.R. until after supper time!

By the way, we still haven't figured out why she had to go to the E.R. to have her stitiches removed. It seems like it would be cheaper and easier to just take her to our family practicioner, but then we're just clueless peons.

Anyhoo, I DID get them mailed this morning after waiting in line behind 47,000 other last minute package mailers. So never fear, presents are on the way!

Except for the 3 sweet folks in the Ornament Exchange and the Pay-it-Forward promotions. I WOULD have mailed yours today except that your homemade (with love!) gifts are still only 2/3 made.

I bow my head in shame.

I will hopefully make good use of being snowed in and will get them done and in the mail by Monday or Tuesday. 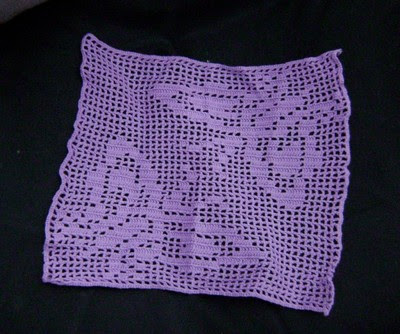 He roared to life.

I was too pooped to do the whole drive, but I did enough that we could get in and out. Mulletman finished it the next day. Mr. Snowblower started on, you guessed it, the first pull.

Mulletman: I'm not having any trouble with it at all. Are you sure you had the choke on?

Groovy: The red thingy was all the way to the right.

Mulletman: Are you sure you had the throttle on?

Groovy: That red thingy was all the way up.

Mulletman: Hmmm. Did you prime it three times?

Groovy: Three times. I KNOW how to start the stupid snowblower. I know just what to do. He just doesn't like me!

Groovy: He and I have a complicated relationship. You wouldn't understand.

We another, smaller storm a couple of days ago. Mullletman called me down to the garage. he wanted to watch me try to start Mr. Snowblower so he could see what I'm doing wrong.

Groovy: He's going to start on the first pull if you're standing there. He likes you!

Groovy puts one red thingy up, the other red thingy all the way to the right. She primes the engine three times. Mr. Snowblower starts on one pull. Mulletman laughs.

Darn snowblower! me thinks the thing has a sense of humor! Glad you like the doily and you are welcome! I still have 3 prises that need to go out! *sigh*

I totally understand where you're coming from with the snowblower...even though I have never seen, started, or got anywhere a snowblower in my lifetime. (We just don't get that much snow here...)

And would you believe that a few months ago, my mom also gave me her autoharp?! Yes, she did! Isn't that amazing? We're like...sisters! :D

Seriously, you inspired me to actually try to tune it and sing Christmas carols with it, too! We always sing them on Christmas Eve around the piano, anyway!

Have a great Sunday, Groovy!

Uh oh. I haven't mailed my packages yet. I haven't even bought some of them.

It's true. Attitude is contagious. You make me want to go to The Mart just to be nice to other people.

I'm sorry, but what is peanut potato candy? Do I really want to know? It sounds JUST AWFUL. (Don't tell your mom.)

Keep spreading cheer. Maybe Mr. Snowblower just doesn't want to make you do all that work so he saves himself for MulletMan.

Things like this always happen with me and computers; and things always work when my husband is around.

He might be tempted to laugh at me, but then, he suffers from Male Refrigerator Blindness and can't find a thing unless I am standing over his shoulder.

I tell him we're even.