Longfellow's Wayside Inn (aka Day 1of the Getaway)

The first getaway day dawned bright and sunny and a bit windy. I was all packed and ready to go out the door a little before 10:00am, but Mulletman (aka Mr. Clean) decided that he needed to wash, vacuum, scrub, and otherwise detail BOTH vehicles before we left.

If you know Mulletman, this does not surprise you.

About 10:30 I went outside and stared at him. He finally looked up and saw me. Slowly it dawned on him that he was gumming up the start to a much anticipated celebration and he began to blush.

"Sorry. Thanks for putting up with my psychotic behavior."

"Oh, it's fine really. I DO appreciate riding in a pristine car. And it's very thoughtful of you to leave the van clean too so we don't have to worry about that when we get back."

I kept on staring, a tolerant smile locked on my face.

"I'll be psychotic a little more quickly!" he blurted and started rubbing for all he was worth.

To his credit, He was showered and ready to go within 20 minutes of our conversation!

Once we were on the road, everything was lovely. We ran some errands, ate a leisurely lunch at Panera Bread (Their soup in a bread bowl is my favorite!), and made the obligatory stop at LLBean in Freeport. We have an LLBean credit card and therefore earn "Bean Bucks". Translated into English this means that we can go to Bean and get very expensive stuff for free. Nii-iice!

We meandered our way toward Boston and, naturally got stuck in rush hour traffic behind the honk-and-go lady. I don't know what was up with this woman. We kindly paused and let her turn out in front of us. From that moment on if we stopped - which we did quite often because it was rush hour - she STAYED stopped. She was looking at and fiddling with something down on the seat beside her. The anxious type-A behind us would lay on the horn, I would give a light tap on mine and then she'd look up and go 20 feet to the next stop. And then she'd do it again. And again and again and again. I thought the guy behind us was going to have a coronary! Oh well, nothing's perfect.

Our first overnight destination was Longfellow's Wayside Inn in South Sudbury, Mass. Please DO take a few moments to look at their website - especially the pdf map of the grounds.

The place is extraordinarily old (for America) and tremendously groovy! It is, in fact, the oldest continuous inn in the U.S. It was immortalized by Henry Wadsworth Longfellow in his book of poems, Tales of a Wayside Inn. Naturally, we bought a copy of the book for a couple of literary geeks we know (I wonder who?).

There are 10 rooms in the Inn; 8 in the new wing and 2 in the oldest parts of the building. Rooms 9 and 10 enjoy the presence of a ghost or two (or so they say!). Our room, #5, was furnished entirely with beautiful antiques. The comfy king-sized bed was covered with a gorgeous handmade quilt. 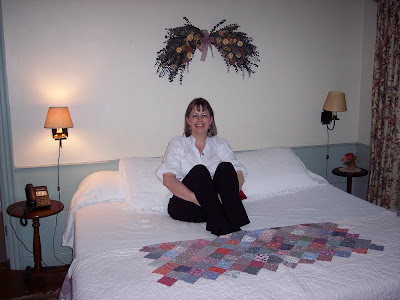 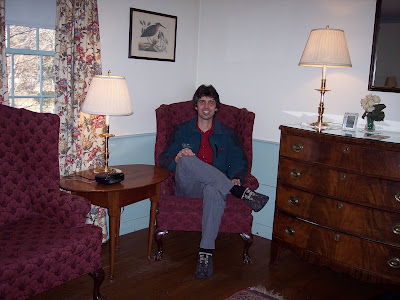 As we snooped around, we discovered that the antique secretary desk (no pic, sorry!) was stuffed full of notes from previous guests. There were YEARS worth of notes in there! Apparently it is a tradition at the Inn for guests to take part in the coveted "Secret Drawer Society". The premise is that each guest will write a note and hide it somewhere in the room to be later discovered by others. This set us to hunting. In addition to the desk, we found notes written on the backs of all the pictures and mirrors in the room (even in the bathroom), on the tags of the chairs, and under the extra pillows inside the big dressers. We had a great time adding our own notes to the stash!

We still had a little time before dinner, so we toured the inside of the Inn. In true New England style it has been added on to innumerable times and some portions were rebuilt after a fire. Consequently, it goes on and on and on! Most of the many, many rooms have been converted into dining rooms, all of which are decked out in true colonial style. Even the lighting is colonial. They don't use real candles in the sconces and chandeliers, but the electric lights they use look like lanterns or candles and are kept quite dim.

Because the Inn is a popular tourist attraction, they set aside one of Henry Ford's rooms for the exclusive use of their overnight guests. It was pretty, but it wasn't really a good place to hang-out. The room was fairly large and all the furniture was in straight lines along the walls. Fortunately, there were a few books and magazines and, of course a television. A very SMALL television. A very small television with an antenna rigged with a COAT HANGER. It was so incongruous with the rest of the Inn that we had to get a picture: 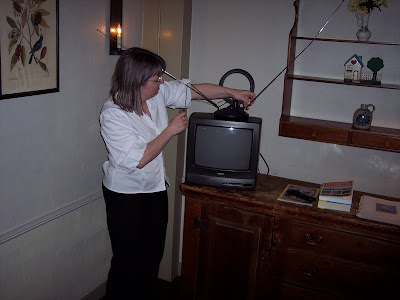 We had our supper in the main dining room. It was incredible! Since the meal was included in the price of our stay, we thought we'd have a limitation on menu choices, but we didn't. We could order anything we wanted! Mulletman had steak with salad, marvelous mashed potatoes, perfectly cooked veggies and apple pie. I had lamb with the same sides and indian pudding for dessert. 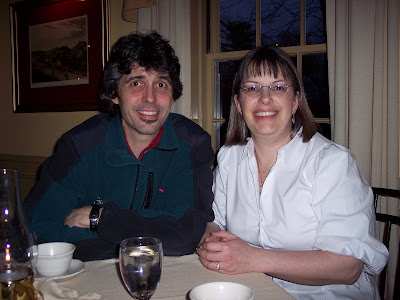 Before the meal they brought out a basket of their famous breads and muffins made from flour that's stone ground in their own grist mill. Awesome! They also brought out a little dish with a small scoop of something orange in it.

"Ah," I said knowledgably. "That's orange sherbet to cleanse our pallets between the salad and the main course." Mulletman agreed, of course, because I am the culinary genius of the family. When we finished our salads, he handed me the dish and a spoon. I took a spoonful and slid it into my mouth…

It was cheesespread for the crackers! I thought Mm was going to keel over with laughter. Embarassing, yes, but I was not the only clever one on the trip.

We left the girlies with their grandparents while we were gone. Since Gramps is in poor health it seemed prudent for us to take a cell phone with us. We don't have a cell phone, but the folks have a cheap, open-faced trackphone. So we charged it up and brought it with us.

During the meal, Mm got up and went to the restroom. While he was washing his hands he started hearing a distant voice saying, "Hello? Hello? HELLO!?" Suddenly he realized that this voice was coming from his pocket. He had bumped his pocket and accidentally auto-dialed his brother in California! After they had a nice, though unexpected chat, we went on with our meal.

Of course, then I had to one-up him by trying fervently to unlock the door to our room, only to realize quite suddenly that I was trying to break into Room THREE which had a prominent "DO NOT DISTURB" sign displayed. Eeek! You can bet I disappeared from that scene in record time!

After we ate, we scouted out all the goodies in the gift shop. We got the girlies some wooden fifes, bought the aforementioned book for the geeks and got ourselves several bars of homemade bayberry soap (only $1 a bar!) and this beautiful "bun warmer". 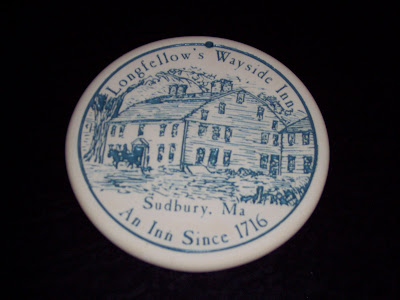 We retired early that night ;-) , put up our own "DO NOT DISTURB" sign and, um, enjoyed the evening.

I loved the trip! You had me laughing and ohhing and ahhing and even feeling that embarassment! :)

I can't wait for day two and I can't wait until my husband asks where we should go for our 10th anniversary next year, I have just the place! :)

Loved reading about this, Groovy!
And your husband sounds so much like mine...he would have detailed the car, first too...;)
Since I may never get to Mass. it was great to take this virtual trip and see this historic place with you!
But I made sure I left when you put up the DO NOT DISTURB sign! ;)

What a lovely story, can't wait to hear more.

What fun, and great pix, too. Funny about the cheese spread!

I saw this recently and thought you might find it funny... of course, this species of Mullet is one of the nasty city varieties, not as nice as your typical Maine Mullet!

DH are up in New Hampshire, and looking for a nice place to spend this year's anniversary (our eleventh). The Wayside Inn sounds wonderful!

I popped over from Judy's blog... hope you don't mind the vist!

"Do Not Disturb"?? Why not?? hehe Oh boy, it sure does sound like you had a marvellous time!!Just a quick visit to wish you and yours a very Happy Easter:-) I have my boys and Wendy here this weekend so it's been busy! xoxo

Loved the story of the inn, and I must confess, Lord of the Manor will wait until the last minute to do anything before a trip. He'll crack the whip for everyone else, then let us cool our heels while he fiddles around and gets ready to leave.

What a wonderful sounding place to stay! I love the embarrassment confessions. Laughter (ours) is good for the body and soul!

I have posted Part 5 of Kev's and our journey, if you're interested. Not as fun to read as this, for sure! But part of the process.

I love your sorbet story! Reminds me of the time JP and I were having a fancy dinner somewhere. The server brought us little rolls on these cute little stands. I thought they were eggrolls ... I tried to fork the finger towel!