Day 2 of Our Groovy Anniversary Adventures

Our second day started out with a fabulous full breakfast in one of the brighter dining rooms. I had whole-grain pancakes (Mulletman had french toast) with good coffee, fresh fruit, freshly squeezed OJ and terrific sausage (homemade?) and bacon; all were quite delicious! 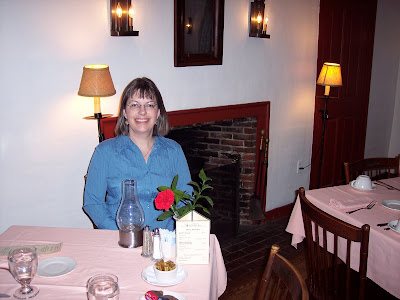 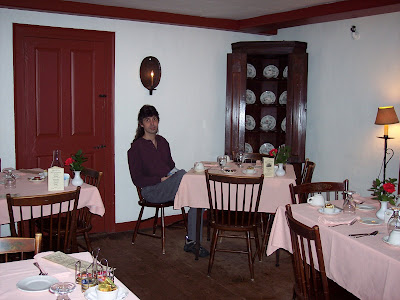 At first we had the whole room to ourselves, but then another couple came in. They were friendly and since they were from the area, they gave us several tips on where to go and what to see. Mm talked freely with them, but I felt a little nervous. I kept wondering if they were from Room 3!

A Look at the Grounds

After breakfast we loaded up the car and then took some time to walk the grounds and see all the old buildings. The grist mill and schoolhouse (of Mary Had a Little Lamb fame) were still closed, but that didn't stop us (Note: The sign says, "Closed for the Season". Ooops!): 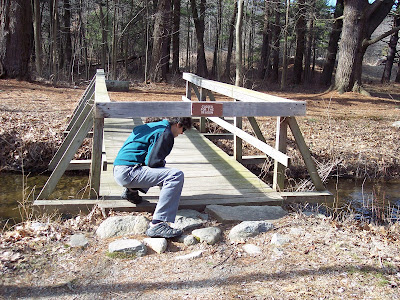 Hmmm. What is an eyelash curler doing outside the coach house? 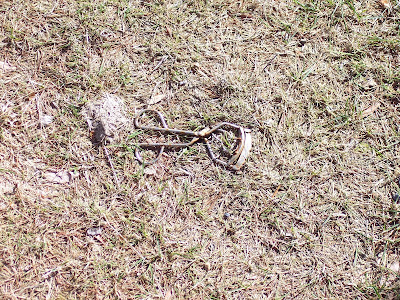 Well, it was time to go, so I kissed Henry good-bye and off we went... 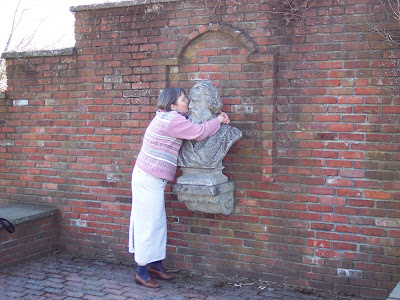 After we'd worn ourselves out with walking and joking and photo taking, we headed out for our hotel in Woburn, MA. It was quite economical (especially with our AAA discount) and was clean and comfortable. We checked in, grabbed a map and zipped our car over to the parking garage for the "T" system - Boston's subway.

After much debate, we had decided that since we were child-free, we should see the grown-up sites that would bore them to tears. Then, when we come back -which we're sure we will - we can hit the incredible kid-friendly attractions like the zoo and the aquarium and the children's and science museums. Consequently, our first objective was the JFK Library and Museum.

But first, we had to traverse this loooooong, cold sky-tunnel to get from the garage to the station. Mm figured that it was at least 2 football fields in length! 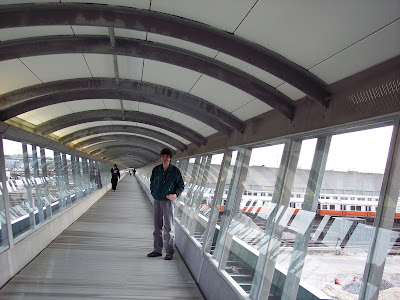 Next we had to figure out how to use the T. This was easier said than done. We couldn't see an info or ticket/token booth anywhere. There were just some automatic teller machine thingies that wanted our "Charlie Card". O.K...sure.

We stood and stared blankly at said machines for untold moments of precious time. We had absolutely no idea what a Charlie Card was or how/where to get one. We had no idea how much the fare was. We had no idea if we were still in America because all the personnel in the area were dark-skinned and spoke foreign languages.

Finally, a very sweet man with a mop in hand felt pity on us and came to our rescue. First he tried to explain in VERY broken English how the system worked. Now our blank stares were focused on him. Finally, he realized that we weren't "getting it" and abruptly turned away. We thought he'd given up on us, so we turned our gaping faces back to the big, scary, undecipherable machines. Then, he reappeared, smiling and waving a card in his hand.

"Charlie Card for YOU!" he insisted. Then he showed us how to charge it on the machine and pay our fare. I was ready to hug him, but had to settle for calling out a heartfelt "God bless you!" because Mulletman was already dragging me toward the station platform.

Happily, the maps were quite clear and easy to follow so we got to the stop for JFK with no further difficulty. Yep. We got to the stop. Now there was a new quandary, how do we actually get to the library/museum?

Being the astute tourists that we are, we followed signs that said "JFK Shuttle" and found ourselves at a bus-stop. To our great joy we discovered that the shuttle was FREE. Huzzah!

The JFK Library and Museum is HUGE; We spent four hours there! We're not particularly big Kennedy fans, but I was amazed to learn how much he'd done during his administration. I shivered through the film about the Cuban Missile Crisis and I cried when Walter Cronkite got teary announcing his assassination. I was particularly interested in how much he and his family did to improve the plight of the mentally ill.

The only pic I took in the museum was this one of the atrium. I like the artsiness of it! 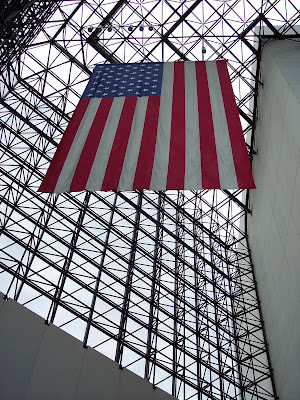 I hate to say it, but our favorite part of the museum was the snack bar. We were expecting high prices and low quality. Instead, we bought both our lunches and beverages for just over $7 total and the food was homemade and unexpectedly wonderful!

We had thought about going into the North End of Boston and taking a tour on one of the famous Ducks (amphibious vehicles), but we were both feeling pretty tired and we had BIG plans for the next day, so we bailed out.

We were a bit surprised how crowded the shuttle was on the return to the T. We were even more surprised at the crowds on the subway...Oh, goody. We were returning during rush hour!

We had to ride all the way back standing up. It took me two stops before I realized that if you plant your feet sideways you won't whiplash into Mr. Bebop behind you. Speaking of which, I must say that iPods are a VAST improvement over boom-boxes in public places!

I love riding the subway and watching the incredible mix of people. There are suits and little old ladies with shopping bags and stoned teens and college kids with suitcases and scary looking dudes and wide-eyed tourists. And they're all SO QUIET and self-absorbed. It's like everyone is afraid to talk or make eye contact. It made me want to start singing cheerfully and inviting everyone to join in. But I didn't. I'm older now and I DO have a modicum of wisdom and self-control, besides, Mulletman would have saved the muggers the trouble and strangled me himself!

The rest of our evening was quiet and uneventful. We read, wrote, and watched TV. Then we retired early so we'd be ready for the marathon of Day 3 on The Freedom Trail.
Posted by groovyoldlady at 10:47 AM

Oh, You always make me laugh so much. And really, I want to start planning my anniversary next year starting now! I loved Kennedy when I was a child, I read all the children's biographies that I could find about him. I would love to go to that library. I went to New York a few years ago and I LOVED the subway. My sister and I decided to take my mom back to the airport via the Subway... bad idea, thought we'd be murdered. But it's a fun memory now!

Oh what fun you had! Love it!

My in-laws LOVE the Kennedy Center and go there whenever they're traipsing around on the East coast. Of course, now that my SIL is no longer working for the AG and is back in the Wild West, I don't know when they'll get back there for a pleasure trip. (FIL doesn't "tour" when he's working).

Another wonderful day! I'm not a Kennedy fan either, and would probably not go there. But it sounds like it would be interesting. I think you should have sung! I'll have to tell you about my niece and our adventure in the "underground" in London someday.

The tulips sprung right back up when the sun came back out - it is so like God's love shining on us after a stormy time.

Thanks for your comments to Kev and to me. How old is "bonehead?" Love that name!

I would have been completely stumped, just as you were, about how to work that "Charlie Card"!! It's bad enough I had no idea how to open my motel door when those credit card type cards came out instead of a key! lol

Sounds like a wonderful time at the JFK museum!! Looking forward to reading about your next day!! xox

This is way better than a postcard. Glad you had a nice time!

I just linked onto you from Michelle's site. Hope you don't mind. I really related to your experience with the subway. That is the way my husband and I feel when we get in places like that. We don't have such things in Oklahoma and don't do very well deciphering. Like you, we usually find some kind person to help us. Thank goodness God always has one there for us.

Looks like you had a grand 25th wedding anniversary...in style!

so glad you survived it! tee-hee!

P.S. My sister, Dixie from Tattle Tales....has been leaving messages for you all over the place....random blogs and all (just teasing!). She tried leaving a comment on your site...but was unable...so emailed me, left a message for you on my blog...on her own blog...etc., etc.

Can you check in with her....so she stops loitering around cyberspace trying to contactyou!!!!