In Which Groovy Waxes on and on About Goats and Kids

*whack*whack*whack*
Is this thing ON?
I guess so...
Hi All. I am back from the nether reaches of goatdom - at least until Friday. On Friday I start farm sitting again. That's right, my groovy self milking 9 (count 'em, NINE) does and choring about a dozen others - not to mention adorable barn kittens and 2 herding dogs (one of which I love and the other of which I hope gets sucked up in a passing tornado). Happily, this time I will be milking by machine instead of by (*OUCH!*) hand. I'm also going to make a social event of it by inviting several other ladies over to learn how to make goat cheese.
Mmmmmmm!
We just returned from our yearly adventure in 4-H at a local fairground. We camp in our tent beside the goat barn for 3 nights and lie awake listening to all the Nubians scream because they are in a strange place. If the Nubians aren't screaming, then kids are - human kids AND goat kids. Apparently the "Lights out at 10pm" rule is interpreted by many as a "suggestion".
Other than an extreme bout of insomnia, the weekend went quite well. The girls made tons of crafts and both of them learned to knit on circular knitters. 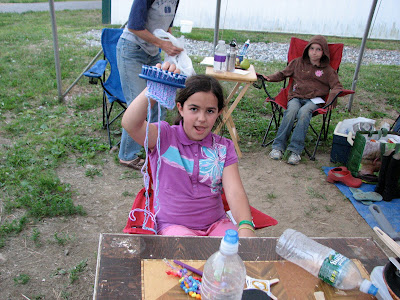 They also worked with goats. Of course. Naturally.
Silly-Head has no interest in showing at the fairs, but she still spent a little time working with and walking goats. Here, she is participating in a VERY small parade: 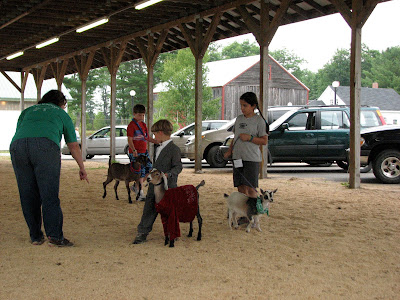 And here she is shaving one of our club's does to get her show ready. 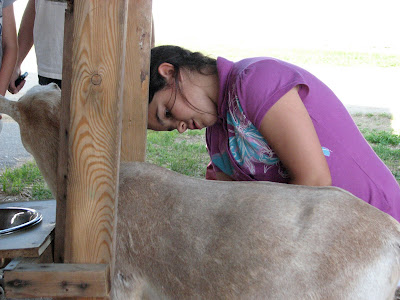 Girly-Girl IS planning to show and compete. She worked on a 4 person "fitting team" where they have 45 minutes to completely shave a goat for showing. Her team didn't win (their doe still had a few rough spots on her armpits. I know, I know...ghastly, eh?), but they had a great time! 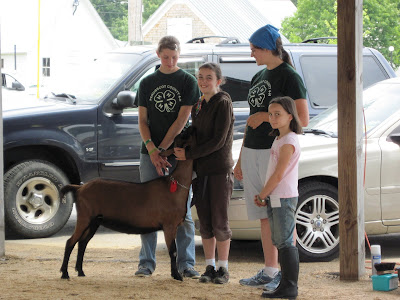 Later she did get to participate in a "mock show" as a practice for the fairs and SHE WON FIRST PLACE! Woooot! The win was made especially sweet by the fact that her goat was extremely unruly and difficult to handle. In fact, she was almost in tears and was ready to quit. Thankfully, the woman in charge of the mock show was graced with knowing exactly what to do and say to give Girly-Girl the determination to get back in the ring and handle her goat with confidence and skill. Her big turn around and subsequent win were the highlight of the weekend for all of us! 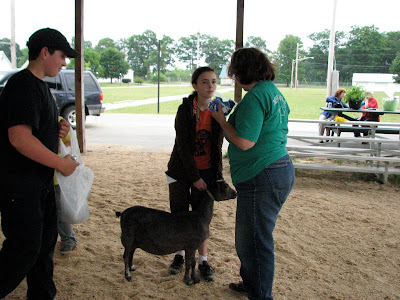 I was also quite busy during the weekend being the resident "Bike Nazi": Please, DON'T ride your bike in the barns! and by being an all purpose volunteer for the event. I even got suckered into asked to lead a workshop on shelter building in the woods. It was a little stressful getting ready on such short notice, but the class went well and I think all the kids had fun. Well, all except for Languid-Child who had no use for the woods or for shelters or for doing anything that resembled work. He just lay about and complained. He finally figured he'd get off the hook and go back to camp if he told me he had to poop. He was horrified when I handed him a couple of tissues and told him to find a bush! ;-)
OK, time for me to be on my Groovy way. Tomorrow promises to be another exciting day involving 4-H, grandkiddos and itty-bitty kittens!
Posted by groovyoldlady at 7:50 PM

When I was a kid I was a 4Her and loved the Fair! Here we only have an agriculture show which is all very serious. I'm trying to convince my daughter to force them to open a category for cats and she can take Senor Ramon and Sgt. Catman. She's being very stubborn on this issue. :(

Sounds like you had fun - congratulations to to the winner!!

Looks like a wonderful, fun groovy day to me! LOL!