In Which Groovy Discusses Suicidal Vaccums and Anything Else That Wanders Into Her Mind.

Yes...you SHOULD be frightened!

Mr Hoover apears to be having some "issues". No, no, not that Mr. Hoover. Not the one I used to lament the purchase of in older posts that I cannot locate because that was B.T. (before tags) That Mr. Hoover died long ago. I was not fond of Mr. Hoover - he was far too quirky for my taste - so I was excited to look for a new vacuum. Sadly, my dreams would never come to fruition. My frugal hubby insisted that one large household does NOT need two vacuums. We can just share with The Folks. The Folks live in an apartment attached to our house and they just happened to own Mr. Hoover's cousin, Mr. Hoover2.

Our first hint that Mr. Hoover2 was temperamental was when he ran away from home like a dissatisfied teen. I made an errand run and when I got home, I found Mr. Hoover2 hiding in my entryway.

(Note: In Maine, many homes have a double entrance. You go through one door and into a small porch or room or perhaps even the garage before you go through a second door into the house. This called a mud room for reasons that are quite obvious in winter and early spring. Since we're "from away" - ie Florida and Missouri - we persist in calling ours an entryway.)

I coaxed him and wheeled him back next door. Next thing I knew he was back in MY entryway! Apparently he was feeling abused over there because they made him bathe after every use and because the small but fierce Dirt Devil was taking his place far more often than he liked. So we, being the softies we are, let him stay. When Grammy needs him she comes and grabs him. He never cries, but he makes the saddest face as he backs through the doorway. And he's always spotlessly clean when he comes back. It's rather like having a groomer for our vacuum!

Then I guess he got to feeling somewhat insecure. Admittedly, I was not (am not) shy about pointing out his faults to anyone who would (will) listen. The door to attachment compartment always falls open (we've duct taped it), the attachment for cleaning hard floors will only clean about 3 square inches at a time (if that), the attachments frequently UNattach themselves, and the screen filter has to be hand cleaned - usually 2-3 times per room. Gross! He plays favorites with the dust bunnies - mercilessly devouring some while letting others off without so much as disturbing the air around them. Now the living ones are all scooching under the couch and plotting their takeover of Groovydom. I know this because I can hear them whisper at night. But back to Mr. Hoover2: The replacement HEPA filter is $30 (so we just wash ours - not as easy as it sounds!), and is a nasty, dusty, disgusting mess to clean. And don't EVEN get me started about the bagless dustbin.

It was Grammy who first noticed that not all was well. "Groovy, there's a hole in the vacuum cord. Do you know where Mulletman keeps the electrical tape?" Strangely enough I did know. So we got the tape and doctored Mr. Hoover2's tail for him.

A week later there was another bare spot. Then another! What was going on? Finally, after weeks and weeks of covert spying him, I discovered that the little twerp was doing it all himself!! Every chance he got, he'd grind down with his beater bars onto the cord and chew another hole. I brought him into the kitchen for a show-down.

"Look," said I, "I know what you're doing. You're chewing that cord on purpose. That's naughty! You should be ashamed of yourself! According to standard vacuum cleaner etiquette you're supposed to shut off that beater bar when you are in an upright position. You know that don't you? DON'T YOU???"

Would you believe he wouldn't answer me? He just stood there with this smug little Hoover smile and kept his trap shut. Stupid vacuum!

Now he's not allowed out unless he's under constant surveillance...

Anyway, 10 minutes after the call I logged on to Facebook and saw that he had posted only a few minutes before that he WAS IN MAINE enroute to his base. He was only an hour away at the airport in Bangor! I opened all hailing frequencies, but I couldn't get him back online.

Oh well, I'm glad he's home from the war. He's supposed to come up here for a visit next month to see his kiddos and his friends and his groovy old parents and sisters. Then he'll be off to NY to visit Funsocksgirl for a bit.

First GrammaJ, knowing my near-famous love of dark chocolate, bought me these for my birthday: 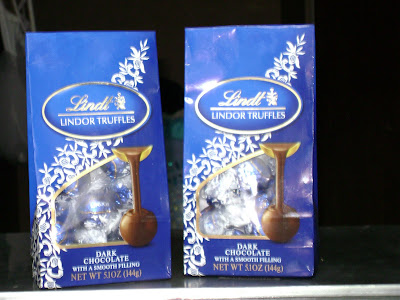 Well, it gets even Groovier because this is what I got as part of my gift from The Folks: 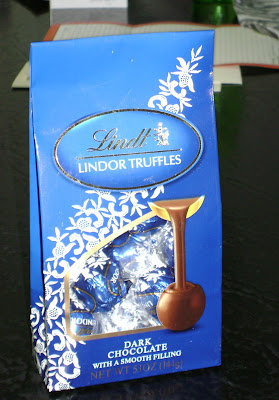 But wait...Then a package came in the mail from Funsocksgirl. What can it be? WHAT CAN IT BE?? 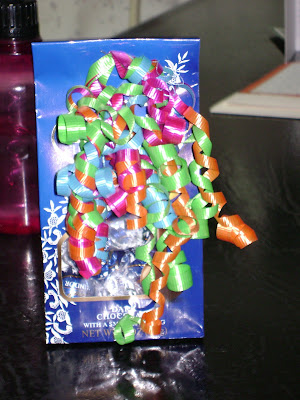 uh-oh, the view is obscured by the pretty ribbons. Here, let me pull them back to reveal: 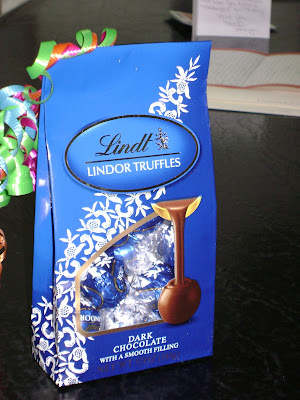 Does my family know me, or what?

Next time Mulletman looks at our photo program he's going to wonder why there are 9 diffeent pics of Lindt chocolate packages. (Good thing I deleted the really blurry ones!)

My (soon-to-be-ex) husband was also "frugal" and refused to replace our fridge, even though it froze everything. Including our salads. He was also a master of "making do" when things just didn't work right, or making me borrow stuff from family so he wouldn't have to buy anything.

I still have the vacuum he bought us, even though I begged him to take it with him when he moved out. It spits dust, emits a migraine-inducing sound, and despite repeated cleanings, smells HORRIBLE.

He bought himself a new machine.

Yay for families who know your taste in chocolate! Dark chocolate rocks.

WV: telitubv (tell it to Bev...who is Bev and why would she want me to tell her stuff???)

Let's see: we have four vacuum cleaners for our 2 BR apt. We have our own carpet shampooer, too. And I need a shop vac for the basement.

Your problem is not lack of vacuums; it's the lack of quality. Sorry. But really, you should get some more vacuums. It keeps you from going quirky.

Good thang you get all that chocolate: it helps keeps you from going kwirky.

Who knows where to download XRumer 5.0 Palladium?
Help, please. All recommend this program to effectively advertise on the Internet, this is the best program!