I have friends all over the world. And don't they LOVE to regale me with dramatic stories of invasions by exotic and dangerous critters. I've heard tales of spiders the size of dinner plates in Haiti. Large, poisonous snakes in a house in Botswana. Varieties of voracious ants in Tanzania. Cake stealing ants in Guam. Camel spiders in Iraq. Malaria laden mosquitoes just about everywhere. Big Machete weilding robbers in Swaziland. Scorpions in Texas. Bedbugs in Russia. You name it, I've heard about it: Fleas, lice, parastitc worms - the whole lot of 'em.

Well folks, I'll have you know that Maine is no place to come if you want relief from wild and creepy dangers. We have blackflies that will either suck you dry or make you totally insane. We have mosquitoes that carry Equine Encephalitis and West Nile Virus, We have ticks that carry Lyme Disease. We have garter snakes that hide in cars and terrify men with mullets. We have evil woodpeckers of destruction. And we have abundant deer, moose, and turkey populations that will randomly leap out in front of your vehicle and try to make you and your loved ones into a road casualty statistic.

Oh yes, we have all that and more. This week, in fact, things turned quite ugly and war was declared when I saw one of these evil denizens of doom: 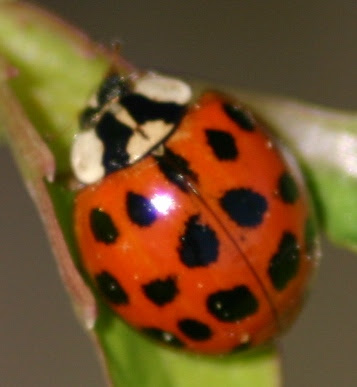 What? You would never dream of considering an adorable aphid eating ladybug an enemy? Well, neither would I until I followed the little fellow into our livingroom and saw dozens of them. DOZENS of dozens of them! 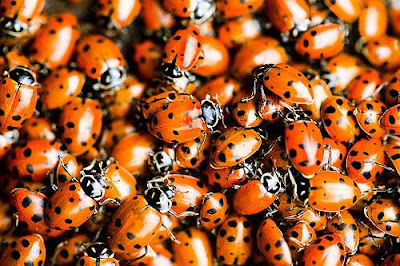 They were on the walls, on the ceiling, on the windows, on the curtains, on the door. They were making little adventurous excursions into the bedrooms and upstairs to the music room and guest room. They were hovering around the light and, after a few moments, landing on my shirt and neck and hair.

Oh yes, they were.

Now, in general, I love ladybugs as much as anyone. They are pretty (for a bug) and I know that they are a boon to the garden. I've even cheered for them as they ate the apids on my sunflowers. But this. was. INSANE. They were trying to take over!!

I hollered for my husband. He came in and said, "Wow, that's a buncha ladybugs. You want me to get you the ShopVac?"

[ANOTHER IMPORTANT SIDE NOTE: Ok admit it, some of you are horrified that I would suck such cute, adorable and beneficial insects into the oblivion of the vacuum's interior. Look at it this way - BETTER THEM THAN ME! No, seriously. I have no aphids on my houseplants. None. In other words, I have no food for a ladybug in my home. They all would have starved to death. So think of it as a mercy killing. I was putting them out of my their misery!]

I took the curtains down and shook them and vacuumed them. I vacuumed furniture and walls and ceilings and lights and my jacket and Silly-Head (she got in my way). And yet they kept coming. The more I vacuumed, the more there seemed to be.

Especially at the top of the door.

That's when I noticed that seal around the front door was woefully inadequate. We've been working on the house all stinkin' summer long and one of the tasks yet to be completed is replacing that seal. (One that needs to be done soon considering that the heat is on and THE LADYBUGS ARE COMING IN and all.)

I hollered for my husband. He came in and said, "Yeah, I need to pick up a seal from the store sometime."

[IMPORTANT SIDE NOTE: That's not what he was supposed to say. He was supposed to immediately cry out, "Alas! I have failed! I should have taken care of that sooner! Please forgive me!!" Then he was supposed to come up with a swift and sure temporary way to seal the openings around the door and stem the invasion. Yeah...]

So I got out some masking tape and took care of it. 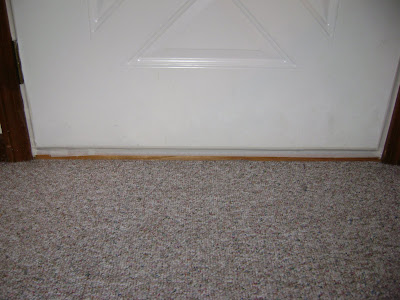 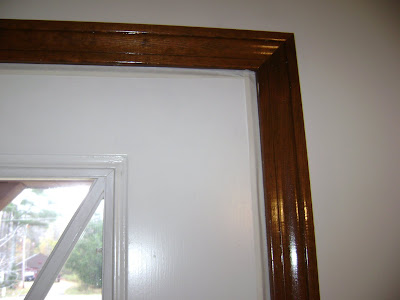 Problem solved! Now all I had to do was mercilessly hunt down the stragglers and Vroooooom, they were gone too. Next, I took Mr. ShopVac outside. I was going to - kind person that I am - let the little buggies go now that I had blocked their entrance to my home. Alas, they apparently all choked to death on all the flotsam and jetsam of the Vac's innards. 'Cause, honey, they weren't moving!

So I dumped out the Vac, rinsed it, cleaned the nasty, NASTY filter, and set it all out in the sun to dry.

Mulletman was so pleased! He said after it all dried he buff it up with some ArmorAll and life would be beautiful!

I was just glad the invasion was over. And, let's not forget that many insect species consider us the invaders...


Heh-heh-heh!
Posted by groovyoldlady at 7:56 AM

We had a ladybug swarm a few years ago and it nearly drove us nuts! At the time, we were living in a place with a high ceiling, and the little darlings would fly around, tap-tap-tapping on it.

I don't remember exactly how we got rid of them, but I managed to set as many as possible outside before striking the final blow to them. However, I do remember finding the remains of the ones we missed for months afterward.

LOL.. my DD has been going around our house with a jar and collecting bugs then tossing them outside. It's become a nearly full time job for her. Crazy critters!

Hmmmm. Now do I want to come and at your house?? Of course I do!! You are so hilarious - I can't wait to meet you!

The video is great - what an inventive guy! I just hope the stupid ASPCA doesn't get hold of him!

I noted that I was linked in your labels and was just curious!

I hate anything en masse. Yuck! I watched that ant video hoping to get a clue about what to do with our ants. That man was not helpful at all!
But I am happy you have terrible things to brag about at your house too. :)

Wow, I've never seen an entire swarm of ladybugs but I did see on in mommy's trunk when I was helping her unload groceries.

They're supposed to bring good luck so maybe you'll have a whole bunch of good lunch.

We have moths at the moment. They hide behind curtains and in coats hanging on pegs. You think you've got them all and then you hear that familiar whirring against the lamps. I sympathise. I love ladybugs and would feel awful sucking them up but I can't imagine what I'd do if an entire swarm got into the house. Nightmare!

So then you emptied your Shop Vac outside on some aphid-covered plants and all was well with the little critters. Right? Um, right? ;)

The fire ant guy has too much time on his hands. The cheapest and most environmentally friendly way to get rid of them is to pour boiling water on the fire ant hill. It's awful, but so is seeing your little one's feet covered with bright red scabby bumps.

We get ladybugs when it turns cold, too. Never thought to vacuum them. I quit squishing them when I found out they left a stain. Now I let them live if they want and vacuum them up when they are dry.

As far the fire ants go, we have them in our yard and boiling water is too good for them. They even come in the house and bite us while we watch TV. We use harsh chemicals, which make them move to our neighbor's yards. Fire ants are pretty much invincible.

If only the ladybugs would eat the fire ants.