In Which Groovy Isn't Sure What She is Even Saying

My apologies for being such an absent blogger. Apparently, I have "a life". And by "life" I mean that I have been way busy. Way, WAY busy!

I went into August thinking I would actually have, you know, time to work on my Squidoo lenses. That's why I joined that Team One group. We planned to take the world by storm with a plethora of high quality, informational websites. I even considered (with glee) the prospect that I might become a Squid of renown for my prolific lens production.

I thought the month would bring peaceful, relaxing weeks of summer fun and joy. I envisioned relaxed time with the family by one of the nearby lakes and quiet mornings and evenings of writing.

I rather expected tranquil hours of meditation to carefully plan this next year's school curriculum.

I planned to walk and run and ride my bike. To garden and landscape and identify insects, birds, and wildflowers with my field guides. To practice my bass, attend outdoor concerts, and chill with good friends.

Attended birthday parties, farm sat, helped set up a 4-H display at a nearby fair, took GrammaJ shopping and ran errands for/with her, ate a traditional North African meal with several friends, had a meeting with several desperate moms who want me to do biology labs with their teens, tried to convince my girlies that piano lessons with a different teacher (other than their groovy mom) was a GOOD thing (They're still not convinced!), started planning my lab schedule for the school year, painted the house, painted the house, painted the house, plotted evil against the bazillions of wasps who were unhappy with our painting their house (die wasps! die! Die! DIE!!!!), planned a fabulous wedding cake for our dear friends Nate and Betty, made a 60 mile round-trip run to buy pansies for said wedding cake, baked and decorated said cake (in 90º+ humid weather with no a/c), attended the wedding 90 miles away and then spent the afternoon at the beach, tried to breathe (rather unsuccessfully - the ozone levels, heat and humidity are making asthmatic inhalations the norm around here), chatted with my son (in Iraq) on FaceBook, previewed a typing program, researched pellet stoves and shin injuries and conjunctivitis, took Girly-Girl to the Doc for conjuctivitis (wonder how much they'll bill for that 2 minute visit!!), cleaned my house and did all the usual chores, forgot to pre-buy our winter's heating oil (for the first time EVER!), found out our housing taxes are going up $1,000 this year, rejoiced in our church's baptisms this past Sunday, and I probably took a shower or two in there somewhere... 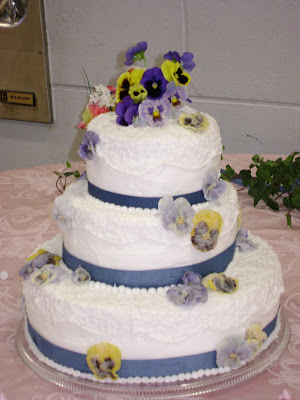 Oh yeah, and we started school.

Today? I'm supposed to be painting the folks' entryway, but they're still asleep. Painting while they're both sleeping feels a little awkward because their bedroom is right near where I'd be working. So I may prep the room later this morning and then actually paint tomorrow. Later we go to the nursing home, then lunch and "chores" with GrammaJ. Then off to the town office for a hearing to contest our tax raise, and THEN some school time.

Then, maybe then - if I can breathe - I can work on my Squidoo lenses. And make an LLBean order. And clean some toilets.

Coming up? This weekend is the American Folk Festival in Bangor. It is majorly groovy and Mulletman and I try to get there at least one day each year. He has vacation next week. Since most of the painting is done, we're hoping to go camping for a day or two and then maybe hit Funtown with the kiddos. That's assuming it is cooler and that I can breathe. Breathing is GOOD.

It's rather strange, but every single time I've looked at the calender and said, "OOOooooo, a day OFF!", either Mulletman has stayed home and we've painted or someone has needed me to leave home and DO something.

And I haven't seen my grandkids for over a month. PrettyMom has been busy and we've been TOO busy. I've tried to call a couple of times, but we're just not connecting. I miss them, but every time I try to figure out when we could spend time with them it's like OK, we have an hour on Tuesday or something equally ludicrous. Folks, when you're too busy for your grandkids you are TOOOOOO busy! But how do I get off this merry-go-round? Oy!!!

Note to self: Call PrettyMom TODAY and make. it. work.

On a positive note, the house is probably 3/4 done. We still have to install new doors, paint the garage doors (ugh!) and rebuild/paint 3 sets of steps.

Hopefully next time I can regale you with stories of Wayne and Wanda, the wasps.
Posted by groovyoldlady at 7:53 AM

Oh my, you have been busy! And productive. Unlike me, who has nothing to show for her absence but lots of miles on the odometer: for all the trips I've taken to the grocery store, our refrigerator & pantry should at least be well stocked, but no... it's all been eaten, every last scrap of chocolate, every last bean of coffee.

Oy! I'm exhausted! I know you had a long, wet, cold spring and early summer - but I hear you're catching up on the heat now!

I hope against hope that I can get out there to visit Kev when he's able to have company, and hope we can get together! How far did you say you are from Augusta/Winthrop?

Is painting garage doors very terrible? I'm trying to be better about doing my own repairs but I'm pretty useless in general. I've been considering those sun faded doors, should I give them a pass?

Our garage doors are going to be difficult because A.) they are peeling and must be stripped, and B.) One of them is HUGE. One of the former owners of this house had a semi truck. He made the door and garage big enough to park his rig in.

Our doors are also made of panneled pieces - 4 on the smaller door and 6 on monster one. If we leave them all together and paint them, then the paint oozes between the sections and sticks. Then when you open the door it rips off part of all that hard work you did the day before!

Consequently, Mulletman's talking about completely dismantling the doors and reassembling them after they're completely dry. Of course, with all the skunks and cats and turkeys round here, we DON'T want to leave the garage open any more than necessary.

It will be challenging!

Here's two tricks I used. 1--paint the bottom/top of those sections first; not too thick. Place 1/8" dowels between panels in 3 locations only (left side, right side, center). After you paint each set of top/bottoms, of course. You can even wrap them in ONE layer of waxed paper, if you want. Take your time. Let the paint tack up as much as you can.

2--when those places are dry (tomorrow), remove the dowels and paint the surfaces. It will be easy then to touch up any little flecks that may come off when you remove the dowels. You can also gently close the door so that those pesky critters can't get in. OK, go ahead, ask me how I know.

For a touch of class, paint the top/bottoms the same color as the outside of the door.

I just went over to your Squidoo site. I had no idea you put a link to my blog there. I'm flattered. I'll raise a glass of iced tea to you! Clink. Thank you.

Paul! You are amazing! THANK YOU for the tips. I guarantee you we will heed your advice. We will take our time and do it right. :-D

You baked a cake in 90º+ humid weather with no a/c? Try an oven next time.

Well I won't be coming to visit until after all these chores are done... at the moment, whenever I come here, I need a good long lie down because of exhaustion.

I got tired just reading about all the things you had to do! Phew! Love that cake! It's beautiful!

geez, you have a million things accomplished! and a gorgeous cake, as well. Look forward to the wasp story!

Oy! I've been there and sometimes still am! (not that I've been too busy to see my grandchildren because of course I'm WAY too young to have any yet...never mind that I think I'm like a year older than you but still, WAY too young...) ;)

What a beautiful cake!