It all began as a normal Groovy Sunday - Up at 5am, at church for practice by 7am, staying through most of 2 worship services, a stop at the grocery store for necessities, and home. A usual Sunday afternoon would include lunch, a nap, reading the paper, doing the crossword (I use the term "doing" quite loosely here), and maybe a family game.

But this Sunday only remianed typical until the "lunch" part.

My mom, always on a quest for more natural food products had found a new, all natural soup she loved: 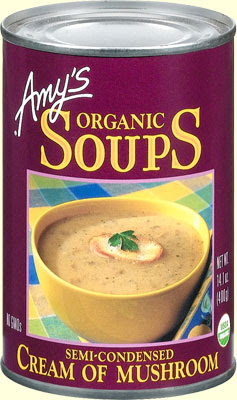 Mom, bless her heart, sent me home from church with a can of this gastronomical delight to try for myself. Generally, I love any and all things mushroom, so I had no qualms at all about stirring up a pot and scarfing down every last drop tasting it. My tastebuds weren't quite as enthralled as hers reported to be, but the soup was quite palatable and made a decent lunch when combined with a banana and a whole grain mini bagel.

I washed my dishes and went upstairs to sew the backing on Swaziland quilt #3 and listen to a riveting novel on tape. I'd been working about an hour when suddenly Mulletman trotted up the stairs.

"I just talked to Mom. According to the weather channel, we're going to have thunderstorms around 5pm. So if you're going to ride today, you'd better do it now." His intense expression left me no doubt that he'd only used the word "if" to be polite. What he really meant was, Get out and ride. NOW! 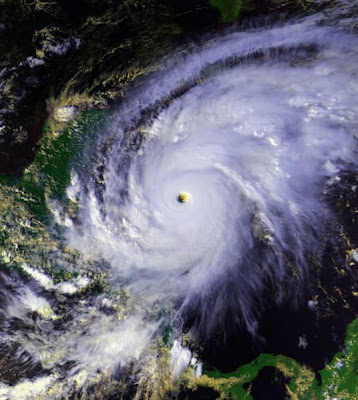 Well, not really. But I did see trees bashing together and debris flying and shade umbrellas zooming through the sky like missiles because the winds were gusting up to 849 mph.

However, being the all weather athlete I am *cough*, I geared up, grabbed my bike and headed out. Don't worry though. I stowed my bright yellow rain jacket, "Just in case".

It's 1.7 miles to the end of my road and before I'd gotten there, I had a stomachache. It was similar to the stitich you get in your side when you try to run right after eating. I found it rather odd because I had eaten almost 2 hours before and neither the soup nor the sides were very heavy. I hadn't even buttered the bagel! Oh well, I thought, I'll ride a little easier and it will pass.

It didn't. In fact, if anything, it got worse.

It hurt so bad that I had a hard time taking any deep breaths. Not good when you are out on a traing ride. In stormy weather. Far from home. With 849mph winds.

I was puzzled as to the cause for a while. But then I burped; Soup - oniony, mushroomy soup. Yum.

I decided if I was still feeling miserable when I got to a certain point, I'd take the "shortcut" home. I turned off the backroads onto a main highway and BAM!!!!!!! The wind hit me full force in the face. Yes, I was riding with a severe gut ache into the headwind from Hell. In front of me was THE WIND, behind me, an ominous squall line.

I was cranking my little legs around as fast as they could go and gasping for breath and moaning in pain and I was only going, like, TWO stinking miles per hour. I was NOT a happy Groovy! I was definitely going to take the shortcut (if I ever actually, you know, got there!)!

I had already stopped 3 or 4 times to put on my jacket (it was raining) and take off my jacket (the sun came out in all its blazing glory). Now I had to interrupt what little progress I was making to put it on again so I wouldn't get injured by all the flying rubble being blown down the road. Not to mention the fact that it was starting to rain again...

After an interminable amount of time and effort and struggle, I got to my turn off. Bad move. Bad Move. BAD MOVE! (I'm telling you, it wasn't a good idea!) The first 1/2 mile of road has nothing but wide open fields on either side. They might as well have been wind tunnels!

I could scarcely pedal. I had a death grip on my handle bars. The wind was grabbing my bike and jerking it around like an angry pit bull with a trespassing chihuahua. I hit a bump and my front wheel lifted momentarily off the ground. It never came down again! (I'd always wanted to be able to "pop a wheelie", but this was ridiculous!)

Then another, stronger gust hit and that, combined with all the soup gas that was building up in my insides, took me completely airborne!

I'm not sure how long I was up there. Unlike Dorothy (BRAVE Dorothy!), I had my eyes squeezed tight shut and I was praying for all I was worth. It was a simple prayer I learned as a child; Something along the lines of, "HEEEEEEEEEEEEEEEEEEEEEEEEEEEEEEEEEEELLLLLLLLLPPPPPPl!

I felt a jolt and opened my eyes. I was atop a hill about 2 miles from where I'd lifted off. I started peddling mechanically, but this exercise in futility lasted only a moment before I was swept into an updraft, once again airborne. 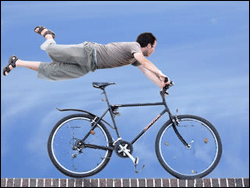 It was a very uplifting experience.

At any rate, other than suffering severe hand and arm pain from gripping so tightly and feeling like my stomach was going to explode and sweating to death inside my jacket while being pelted with all manner of rain, hail, tree branches, errant bumblebees, and small dogs, the ride ended well.

Somehow or another the gale swept me right toward my own street again. I skidded down in the oncoming traffic lane and managed to have enough presence of mind to swerve out of the path of the approaching cement mixer. The wind was at my back now and pushing me along at a tremendous rate toward home. So I just rested my legs and steered.

I spun into our dirt driveway, pulled around the back to the garage and promptly forgot that I was wearing toe clips: 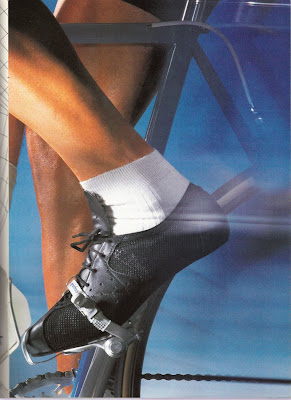 Oh...and those rumors about me swearing when that happened? Totally untrue!

I scraped my bike and myself off the ground and limped into the garage. My butt hurt, my wrists hurt, my back hurt, my head hurt, and my stomach was killing me. Mulletman was in the basement.

"Hi!" he greeted me cheerfully. "How was your ride?"

The funeral date and time will be announced later.

Ah, but whose funeral? Yours from internal injuries suffered in the fall or his for being so cheerful when you came in the door in your bruised condition????

lol, I love the way you tell stories!

Sushi: Oh...if it only worked that way, I'd be the fastest biker out there. Unfortunately, the exhaust system doesn't seem to vent well while pedaling causing a painful build-up unreleased gas. I found that out last year during the roasted brussel sprouts experiment.

Superwoman: I love the way you READ stories!

As always you make me grin.
Susan

'an angry pit bull with a trespassing chihuahua.'

Laurie: I am humbled by your high praise!

OH, man, Groovy! That would have absolutely been my last ride ever. I'm sure of it. Certainly nothing on your trek could possibly be that bad! One question - why wasn't Mulletman with you on this delightful adventure??

You gave me a hearty laugh today! thanks so much! hope everything heals quickly! :)
Chrissie

My mouth is just hanging open...that has to go down as the worst bike ride in history! If you weren't so young and pretty, I would have pictured your bike turning into the wicked witches broom during that wind storm, but alas you look way more like Dorothy....:) I hope you get lots of rest and do something nice for yourself after that ordeal!

I can only laugh as I shake my head!

Next time wear your ruby slippers.