All my life I have desperately wanted to faint, but never was able to. I'd have a woozy moment of "almost" here or a dizzy moment of potential drama there, but I never went down. 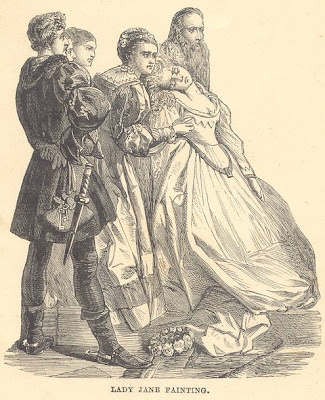 45 plus years and no fainting. It was SO disappointing!

Then, this week, I came down with gastroenteritis, aka "the stomach flu". First came Sunday morning when Grampy got violently ill (you don't want to know the gory details, trust me!). Then came Monday when Grammy (who never gets sick) started throwing up. And finally on Tuesday the evil virus of doom passed through the door betweeen our abodes and I started making multiple bathroom runs. A short while later Silly-Head lost her cookies and more. Poor Girly-Girl kept her hands over her eyes and ears and Mulletman was VERY busy playing nurse. Fortunately for us he IS a nurse!

I wasn't throwing up. The trouble was more concentrated in my intestines. So early on I thought, "Oh, this isn't so bad. Inconvenient, but not miserable."

Then the aches and chills and moans and groans hit.

I was SO cold. I had mountains of blankets on, but I was still shivering. I finally gave up on my fitful attempts at sleeping and headed for the tub. All I could think of was the glorious warmth of a hot bath. I filled the tub up as deep as I dared with hot - very hot - water. It did help a bit. At least the parts of me that were underwater were warmer, but I had to keep shifting around to get other parts of me under because any skin out in the air brought on more shivering.

After a while, I felt too restless and achy to stay in the tub. I let the water begin to drain and reached a shaky hand for my towel. I sort of stood up to pat myself dry, but oh-my-word, I felt awful. I was nauseous, I was dizzy, I was...DYING! (oh, the drama!)

I was starting to cry from the effort of it all. I needed to SIT DOWN. So I did; On the porcelain throne. (Which, by the way, hasn't got one shard of porcelain on or in it anywhere. I'm just saying...) Next thing I knew I was waking up. I was still safely seated (our toilet has a wall on each side) and was sprawled backwards over the basket of magazines and the cute little stitchery tissue box. I was sweating bullets (no more chills, so I guess that was one good thing!) and felt HOR. I. BLE.

It took me a few moments before I could actually sit back up and slide on a few clothing items before crawling back to bed. I slept a while. Then, in a drowsy bit of wakefulness it dawned on me: Oh-my-goodness, I FAINTED in there!

And things have been looking up ever since! :-D

Did you know that, "Asthma is the most common chronic disorder in childhood, currently affecting an estimated 6.8 million children under 18 years; of which 4.1 million suffered from an asthma attack or episode in 2006."

And many, Many adults have it too. I'm an adult and I have it and frankly, asthma sucks! Imagine trying to go about your normal daily life and then suddenly feeling as if you were suffocating. Talk about panic!

It's also a costly disease: According to the American Lung Association, "The annual direct health care cost of asthma is approximately $14.7 billion; indirect costs (e.g. lost productivity) add another $5 billion, for a total of $19.7 billion dollars. Prescription drugs represented the largest single direct cost, at $6.2 billion."

I'd love to see an END to the scourge of asthma, wouldn't you? Well you can help!

Mulletman and I are riding in the 180 mile Trek Across Maine this June to raise money for the American Lung Association of Maine. The ALA funds research into asthma prevention and treatment. Mulletman and I are hoping to raise $750 each by the beginning of June.

Please make your tax deductable donation by clicking the link(s) in the top left sidebar.

My lungs and I thank you!

My father use to faint often when I was a child. Always scared me. Mickey fainted once in the middle of the night, in the bathroom, when he was very sick. He was out for a short time and it terrified me. I was screaming, "No God, No. In Jesus Name NO!" You be careful and don't wish for that any more!
Susan

Fainting isn't all its cracked up to be. Glad your on the up and up.

I've never fainted but I sure have come close to it. Hate that cold sweat yucky feeling that comes over you..bleck! That flu sure is going around...I have it right now and although feeling a bit better today, yesterday was horrible. I'm just feeling very weak today and my stomach is still queasy but apart from that I'm good:-) I do hope you all fully recover real soon!!! I'm glad you didn't hit your head or something when you fainted...but hey, now you say say you've experience it! lol xoxo

I used to faint on a regular basis during my childhood/preteen years just to keep my parents on their toes!

Sorry you are having such a time with this epifluzudic!!! Hope you start feeling well soon!!!

Can I be next, please?

I thought I was going to go down in the shower that night when I was coming down with that nasty flu bug - glad you're better! Wow.