Mercy, I have been in such a happy state of flux lately. I haven't even had any brilliant "this would make a great blog post" moments. Not a one.

Well, except maybe for the brownie mix incident. Though that one would be better if I had had a camera with me. Ah heck, let me hunt up a pic and I'll tell it anyway.

Ah, here's one. I'm not sure if this is the correct brand, but it'll do for an illustration. 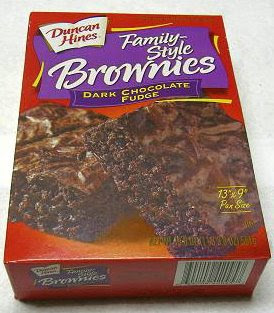 So, I was at the grocery store minding my own business and shopping for the Flat Belly Diet that I am doing for Prevention Magazine - You know, the diet I've been on for the past 10 days; the diet where I've already lost 5 pounds and 2 inches; the one that I blog about HERE...THAT diet? - Yeah. Well, anyway I was just turning down the baking aisle to buy some olive oil and some chocolate chips (I can have chocolate chips on MY diet!) when I saw her.

She was standing across from the shortening and olive oil, staring at the shelves and muttering to herself while shaking her head with an audible tsk-tsk-tsk. Clearly something was amiss.

"Are you having trouble finding something?" I asked. I know my store pretty well and like to help fellow customers.

"Just look at that, will you?" she tossed the words my way without moving her eyes. I followed her line of vision toward the bottommost shelf, but all I noticed were really big cans of oil.

"See those?" She pointed an accusatory finger toward the floor. That's when I saw them too, nine boxes of brownie mix on the floor in front of the olive oil. I waited for her to continue.

"I was in here three days ago and I needed some cooking oil. I was poking around that bottom shelf when I noticed something red behind the bottles. I pushed a couple aside and lo and behold there were all those boxes of brownie mix that some stocker had stashed behind the oil!" Now she finally looked at me, making eye contact to emphasize what she was about to to say, "The brownie mix doesn't go there, it goes all the way down on the other side of the aisle!"

She continued, "So naturally, I told one of the employees. The man seemed shocked and promised he move the boxes."

Now she gestured almost violently toward the brownie boxes. "And THIS is where he relocated them! On the FLOOR! He couldn't actually carry them a few paltry yards away to where they really belong! No-oo. Here they are ON THE FLOOR!!" She lowered her voice meaninglfully, "That's very unsanitary, you know."

I nodded again, my eyes wide with appropriate revulsion at such ineptness and laziness.

"Well that's it!" she snapped. "I'm going to tell the manager!" And off she steamed.

I laughed the rest of the way down the aisle.

Isn't it amazing what will set some people off?

Of course, now that the pregnant woman has seen the box of brownies, I'm going to have to go bake myself a pan.... ;)

That diet sounds amazing! You are doing great! I would love to do it with you, but ... you know, my OB/gyn would be puzzled when I go in for my pregnancy checkups every month.

Maybe the store should give that woman a job!

I'm on muttering lady's side on this one. Slack on the part of the stockers. As far as I'm concerned, everything about the store is a part of their branding. I will now think of that store (I have a picture of it in my head) as the Floor Brownie Store:)

I always feel sorry for people like that who could get so in a tizzy about something so small & petty. She must be very lonely or very hurt or very something.
Susan