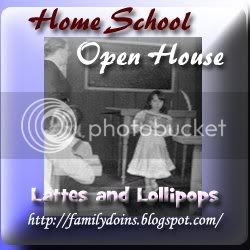 I'm posting again today all because of Tammy. Yes, it is all her fault! Tammy is hosting a Homeschool Open House and Giveaway. Since we've homeschooled our kids pretty much since the beginning of time, AND because I'm a sucker for free "stuff", I have decided to participate.

Our family started teaching at home way back in our cave long ago when Funsocksgirl and Scout were wee little neanderthals. This was in the 80s - WAY before homeschooling was a commonly accepted educational alternative. I remember the constant fear of being reported by someone for "educational neglect" because we were out shopping or my kids were outside playing during public school hours. My favorite way of explaining our seeming truancy was to smile and say, "Teacher work day." Most of the time that placated the cashiers and shoppers and neighbors.

Nonetheless, we'd heard some scary stories of THEM taking homeschooler's children away or even throwing the parents in jail for "abusing" their children by "denying them a proper education". So we scraped together the funds so we could join HSLDA ( Home School Legal Defense Association) even though Mulletman was going to college full time and I was not working. We knew it would be very important to have a knowledgable lawyer if THEY ever showed up at our door to investigate us or question our children. We even had drills for what to say and do if THEY came. Yes, life was scary for homeschoolers in Missouri in the 80s!

In spite of all our precautions, the only real run in we ever had was with a kindergarten principal who told me in no uncertain terms that I was a monster for destroying Funsocksgirl's every chance for success in life. She told me this very loudly in front of many, many other people. It wasn't my fault that she met with such an unfortunate end; Our 4-H project T-Rex was very protective, you know! 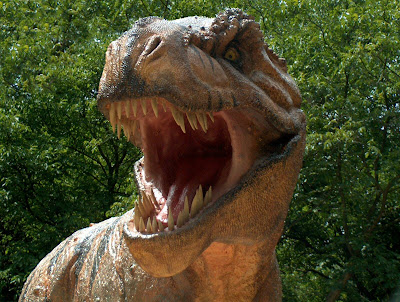 Anyhoo, somewhere along the way we decided to have a couple more children and life seemed to plunge into the age of technology. We morphed from writing with plant dyes on our rock walls to typing on a computer equipped with highspeed internet. Instead of having to search the stars for research answers, we just Google our questions. We've traded our tribal stories for books and our dinosaurs for dairy goats. We've also seen the social stigma of being homeschoolers fall to the wayside. The fear is gone.

At least it is, in Maine, for now. Only God knows what the future holds, so we remain quietly vigilent!

With the older kids, I had fewer options for curriculum and much less confidence in my own abilities. Now the choices are endless and I am quite eclectic in my approach to our schooling.

For those of you who care, we currently use Math*U*See for our arithmetic. It's a good fit for us - hands on and incremental. The girls and I both love it at this point in time.

For English we're using Learning Language Arts Through Literature. It's, well, hmmm. I guess I'd rate it as better than average, but far from perfect - for us, right now. I guarantee you we'll be ditching it by Jr. High. By that point, the girls will be fairly proficient in reading, grammar and writing and I'll take over with my own assignments.

The only other purchased curriculum we use pretty well covers every other subject you can imagine. We use KONOS unit studies.

Groovy LOVES unit studies! I sit down with both the girls and we read historical fiction and non fiction together. We act out what we read. We perform practical science experiments. We create art projects and foods and participate in activities based on our studies. We write about our studies. We observe, we play, we memorize, we write, we drill, we compete. We have fun, but most of all we learn!

Most of my units are selected from the KONOS curriculum, but others we pursue due to our own curiosity about a topic. For instance, we just sponsored a child in India through Compassion International. Naturally, we are now studying India. My girls know the basic history of India, its religions, its basic government structure, its people groups and languages. This week we'll be making and tasting Indian food and making some beautiful batik handkerchiefs.

Next we'll study Kuwait and Iraq because that's where Scout will be in a couple of weeks.

Need examples? Here are some of the hands-on projects we created for our unit on the westward expansion of the United States:

Pictured here you see Fort Groovy. You can double click it to enlarge the picture; You won't want to miss those details! The girls spent three days building and painting the fort. Then they made the little tipis for the indian village outside. Those Lincoln log creations in the foreground are canoes filled with supplies for the Fort. You'll also note the covered wagon on the right. Apparently a pioneer family has stopped at the Fort for news, supplies, and protection. Hopefully they'll also get that broken wheel replaced while they are there. 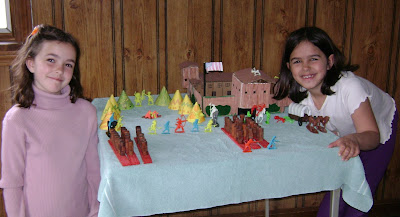 And now arises a practical question familiar to all homeschoolers: Now that we've built this masterpiece, what do we do with it? After all, it can only sit on a card table in the dining room for so long, ya know?

First of all, you take a photo of it. That way all their hard work is preserved and can be viewed with pride again and again. Then, you stow the fort in the basement.

No...we came up with a much more realistic way to dispose of the Fort. We had hostile Indians (Native Americans) burn it! Don't believe me? Well here it is on video:


Hmmm. As usual when homeschooling, our first attempt was a failure. So, let's try it again!


Ah...another failure. However, our third attempt resulted in a pyromaniac's high. Of course, the acting and the filming were less than stellar by this point!

On the next Homeschooling Show and Tell we'll present something very cool. I have no idea what it will be yet, but I'm sure it will dazzle you. Now I'm off to buy some rit dye and some chutney.

Toodles! <- Another example of a failed homeschool moment. I wanted to say "Goodbye" in Hindi, but the online translaters are too confusing for me. Next time I'll just ask our nurse practicioner since she's Indian!

Good stuff! I especially loved the close-up view of their very "creative" take on the Stars and Stripes!

Wow...you have been at it awhile, haven't you? We started in the early 90's, so it was already becoming a little more common by then...but still my son would get the "And why aren't you in school today young man?" And his answer would be, "We had a half school day." End of questions. Now it's rarely even asked...I kind of miss those days! :)

We love our Math-U-See too! And you're so right...projects rarely ever work like they're supposed to on the first try.

Loved your post...thanks for sharing!

Oh Groovy...you get a A+ from me, that's for sure!
I just loved hearing about your early days of home schooling, and I so admire those like you who were sort of pioneers- back when it wasn't "normal" like it is (or almost is) today!

Tell the girls I love their fort and I'm going to have my own girls see this post...

I was sitting here completely entertained by the burning of the fort...heehee What a creative way to dispose of it! But hmmm...how can I figure out a way to dispose of the Mayflower...sinking it in a real ocean just seems wrong!

Thank you so much for participating, Groovy, and for such an informative and fun post!

Namaste
(some will use this just to greet others will have a much more spiritual meaning behind this.'the GOD in me recognises the GOD in you)

I also think it a great way to dispose of the project. My son was horrified that you could allow such a thing.
Maybe we are now in our country where you were. I come across many who is 'hiding' their children because they are not legal home schoolers.

Thanks to you other ladies for stopping by!

Very creative project - well done! I have such admiration for you who can do this - there is no way I could have done it and stayed alive or out of jail!

I couldn't see the burning of the fort!

I loved the war whoops. ;o)

Having fun while you learn is hitting the nail on the head if you ask me. You know we need to know what the Rit dye and chutney are for, right? :o)

I'll be busy tomorrow so I thought I'd stop today and wish you a blessed Thanksgiving.

Hi, always happy to meet a fellow homeschooler! (Oh, and I know all about NaNoWrimo - it haunts me.)

I loved hearing about your early homeschool days. What a great story. Your current project was great also!