From what? You may ask.

From The Big E.

Folks, I know this will come as a complete shock to you, but I'm not as young as I used to be. If I was I would bill myself as groovyyounglady - which not only looks dumb with that double "y" but also would set me up for wisecracks about how I don't look/act THAT young. I'm too wise for that!

The point I am trying (and failing) to make is that the trip just plumb wore me out!

We boarded our awesome Cyr Coachline bus at 6am and rode for 5 hours. Yes, it was very comfy, but it was still 5 hours! Fortunately our good friends the Q's rode with us, so we weren't bored in the least. We talked and talked and talked and watched Veggie Tales and snacked and talked some more. The girls colored and read and talked and giggled and enjoyed the freedom of changing seats every ten minutes. Girly-Girl did NOT enjoy the bathroom on the bus. It was too SCARY - just in case you wanted to know. Silly-Head wasn't fazed at all...

Here we are with the Qs after leaving the bus. I am, of course, behind the camera. 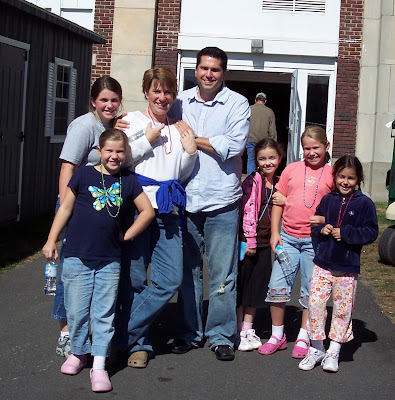 We arrived at the fairgrounds, unloaded all our stuff and sat down to our free lunch. They served seafood pasta something-or-other, rice, beef stew (served over the rice - very yummy!), mixed veggies, rolls, and an icecream sandwich. Girly-Girl had rice and a roll before her icecream. SillyHead had a roll and some corn that I picked out of the mixed veggies for her.

Never let it be said that this Groovy fam has conquered picky eating...

Once the meal was over, we had approximately 6 hours for thrills and delights. We chose to see the circus first. We waited almost an hour for it to start, but it ended up being worth the wait. It was tremendously entertaining! I left there feeling like I needed to work just a tad more on my flexibility if I wanted to gracefully tie myself in knots like the contortionist! Do you think, with a little work, I'll be able to touch my butt to my head?

Here are Girly-Girl, SillyHead, and Olive-Oil waiting for the circus to begin: 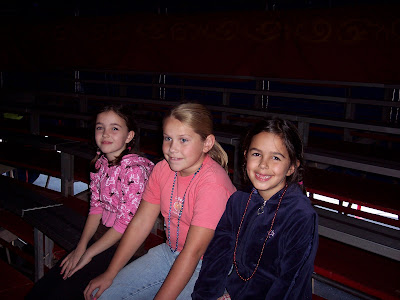 Only 4 hours left to explore...We checked out the children's petting zoo with the Q's, then went our own way to check out the midway. All summer long we've been going to fairs. All summer long we've been telling the girls "No rides!" because they were just too darned expensive. This time, we busted out of cheapskate mode and I paid $4 each to ride the ferris wheel. Both the girls were exceptionally appreciative and their happy expressions made it worth every penny! 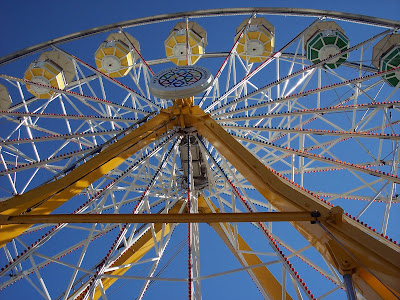 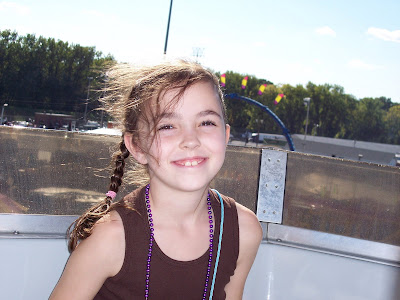 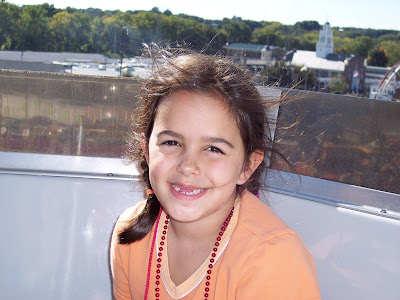 At those prices, one ride was my limit, but the girls had brought some of their own money. They paid for their own ride on the carousel. I could have ridden along with them for free, but they didn't want me to. My shy little girlies paid their own way, got all settled by themselves and then posed so I could take pics. What's the world coming to??? 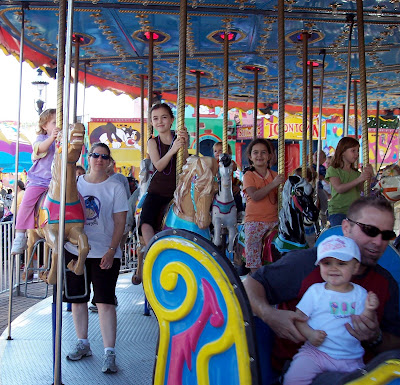 Then we wandered around looking at stuff. This is the bggest fair I've EVER seen and trust me there were approximately 3 miles worth of STUFF and, and, and THINGS and ATTRACTIONS (Only $1 and you can see the world's largest pig or smallest horse or oldest dustbunny...), and ANIMALS, and FOOD, and BEER, and MARINES, and PEOPLE. It was quite overwhelming!

Oh looky - A truck made entirely out of butter! 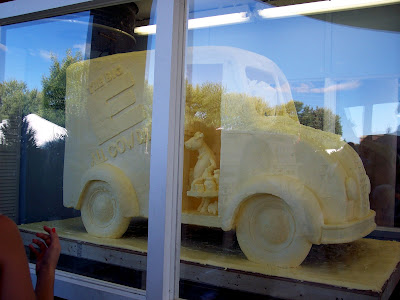 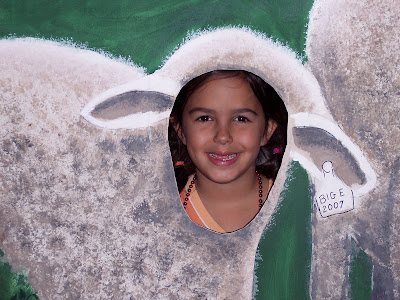 By the time we found our other 4-H friends at the stock/showing pavilion, it was time to turn around and sprint completely to the other side of the fairgrounds for the evening parade. It was well over a mile away!

Here we are: Once again, I am behind the camera! 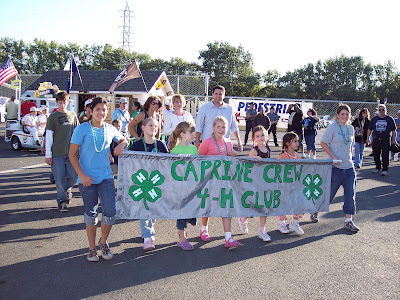 We hustled through the ever thickening crowds and finally figured out where we were supposed to be. Then we marched for good, solid hour. I wasn't sure poor Silly-Head was going to make it. She's not a whiner, but her foot was starting to hurt and trust me, I CANNOT carry that child more than 12 feet! I rubbed her back and coaxed and we dodged horse poop together. We limped along and made it back to where we started only to realize that it was already time to get back on the bus!

We made it. Whew!

Then we had the 5 hour return ride. It was MUCH quieter than the trip out!

The Q's had opted to come back on a later bus, so we didn't really know anyone on the bus. It didn't matter. They popped Dreamer into the DVD player and we just vegged. As soon as that movie was over, Silly-Head crashed for the night. 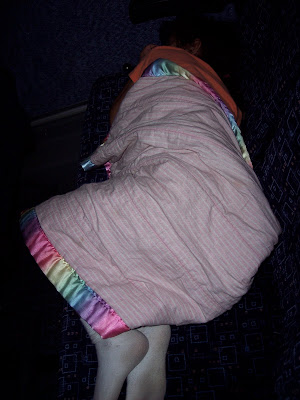 Girly-Girl, however, did not sleep at all. She stayed up and watched Bridge to Bridge to Terabithia with me and then stayed up to snuggle with me all the way home. We pulled in at 11:30 pm and she was still going strong.

Would I do again? In a heartbeat!

We had so much fun! A thousand thank yous to the State of Maine for sending us!
Posted by groovyoldlady at 4:26 PM

What a great trip and these old bones ache after being in a car for 2 hours, but I still feel "groovy" at times ☺

Believe me, I understand perfectly well what you mean when you say trips tire you out! lol After my weekend and 6 hour drive back home, today I've been like a zombie and I know I probably won't even see 9 pm tonight!! That fair sounds and looks like it was terrific, I so loved looking at all the pictures:-)xox

Yes, I think it was definitely worth it. Look at how much fun your family had. You can always sleep when you get home! hee hee

Looks like fun! And what do you mean you're not young? Didn't ya just turn 21?

I'm exhausted just reading it -- and I can only imagine. I got home from the dinky little Deerfield Fair completely wiped out. And, YEAH -- what's UP with ride prices? Sheesh! I spent $20 for a sheet of tickets for DD and she got six 2/4 rides (so I had to buy two more tickets). Unbelievable.

Hope you're all good and rested today!

BTW, yes, I can choose a book for you if you win my BAFABW contest (or you can look here for all the "sweet" reviews we've done and choose one for yourself!).

Oh, and I posted another video -- just for you -- on my website, and I refer to it and take your name in vain on my blog *G*.

What a fun, groovy mom you are!