Visiting "My Soldier" in Kentucky

A million thanks to those of you who prayed for me. I woke up on the morning of our flight and felt just fine. That was a tremendous relief!

We left Tuesday and flew out of Boston on an itsy-bitsy AA commuter plane (ALL our planes 'cept one were itsy-bitsy!). I had some problems with dizziness and disorientation, but my stomach was fine.

We landed in LaGuardia (NY) and realized that we were going have the privilege of spending 4 lovely hours of fun and excitement there. 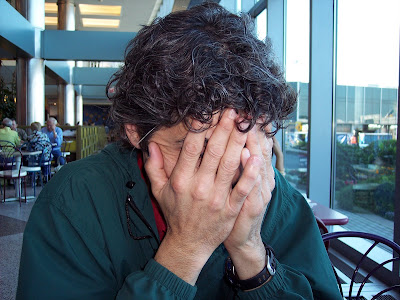 Not being a seasoned traveler, it never occured to me to bring cards (and we certainly didn't buy any because they were $10 a pack) or anything else to do. Instead, we wandered aimlessly looking through the small, high-priced stores and then looked for a comfortable place to sit.

There IS no comfortable place to sit in LaGuardia!

(I share this with you so you will be prepared.)

However, an overview of Border's book store revealed that, hidden inside just out of sight are three cushy, leather chairs. Cushy leather chairs that always seem to have someone else's buttocks firmly entrenched therein.

Finally, after 20+ hours (more or less) of waiting and wandering and hovering and covert spying, 2 of those chairs were vacated and Mm and I moved in for the remainder of our wait. We read magazines and bought a word puzzle book and just hung-out until it was almost time for our connecting flight.

We landed in Louisville around 8:30 and headed ALL THE WAY to the other end of the airport to get our luggage and rent a car (I'm sure the exercise was good for us after all that sitting). I thought the little red chevy Aveo was cute, Mm thought it was "thrifty". Either way, it got the job done and didn't cost an arm and a leg. 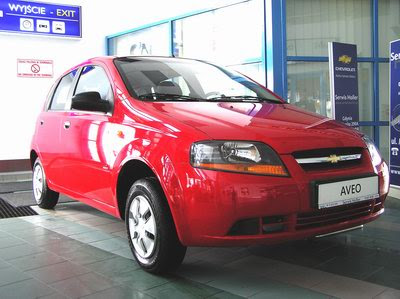 As we were throwing our bags into the car, Mm noticed that the temporary tag was expired by over 10 days. When we told this to the girl in the rental booth, she just printed off another "plate" and wrote in the new info herself. We were renting in Kentucky, but the "new tag" was from Nebraska. Mulletman was just a wee bit nervous that this might cause us some difficulties with security at Ft. Knox. Fortunately, it didn't end up being an issue.

Next we had to find our hotel. We stayed at the Lousville Rodeway Inn which was very conveniently located RIGHT NEXT to the Interstate and the airport. It was VERY NOISY what with all the highway traffic and the jet engines screaming overhead. Mm was convinced that the planes used the hotel as the first bounce on their landings. Here's the view from our front porch: 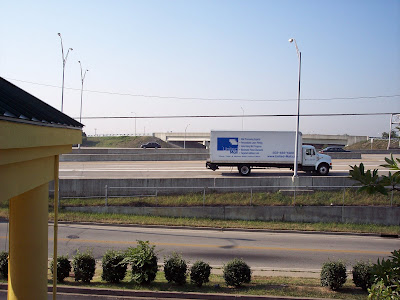 Things got interesting on Wednesday. Apparently this whole "dinner with your soldier" event was top secret. It took an act of Congress to to figure out where we were supposed to go and when we were supposed to go there! We had to call here and there and everywhere before I finally got someone from Scout's division to fill me in.

[OK, ok. I have a confession to make. Scout actually DID send me a paper in the mail with dates, prices, times and a nifty map of the base - a paper that was supposed to have been brought with us to the event. To my great chagrin, said paper was at home on my desk...]

Since we had pretty much the whole day to kill, Mm and I went downtown and gawked at Louisville for several hours. It's not bad, for a city... We got to see the Colonel Sanders (KFC) Museum, the Ohio River (and some nifty paddleboats thereupon), and bazillions of restaurants etc. at 4th Street Live.

Finally we headed out to Ft. Knox and checked into our new, much quieter Super 8 Hotel. There we rested and freshened up for the big exciting banquet.

With the war on, we figured that Base security would be pretty tight, but it wasn't. We just showed our IDs and off we went.

We got to the banquet hall early and sat around waiting for "our soldier". While waiting, I snapped a pic of the patriotic jello formation: 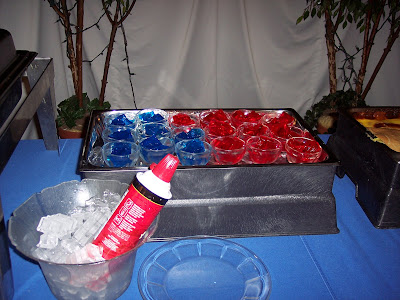 The rest of the food was OK, but nothing to write home about. Consequently, I won't write about it here either. Besides, we weren't there for the food. We were there to see "our soldier" who had been away for 16 weeks! 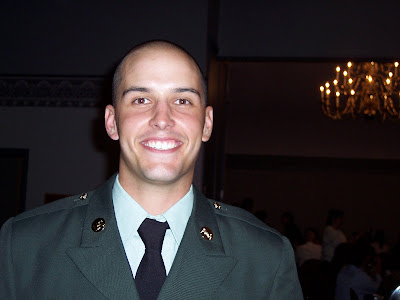 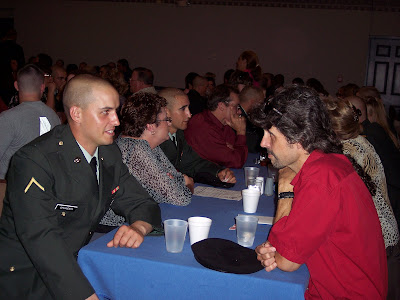 After dinner we had some professional photos done. This picture has been rotated and is nicely upright on my computer, but it insists on showing up sideways here. I can only hope you won't hurt your neck whilst admiring it: 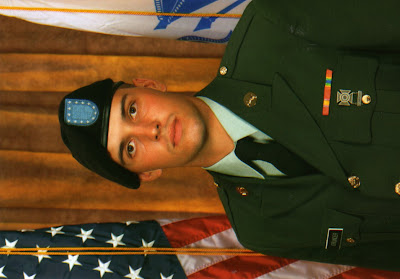 We also got to hang out and meet some of his buddies and their families. We stayed as long as the no-see-ums and the drill instructors would let us and talked, talked, talked.

The Graduation was the following morning. It was a nice ceremony, although we did get a bit weary clapping enthusiastically for 140 graduates! Scout was in the 2nd Platoon aka "The Killers". He received special recognition for his physical prowess and he earned the right to work a "hometown assignment" for two weeks, assisting the master liar Army recruiter here in town.

That blurry soldier all alone on the left is Scout shouting out his rank, name, and hometown. 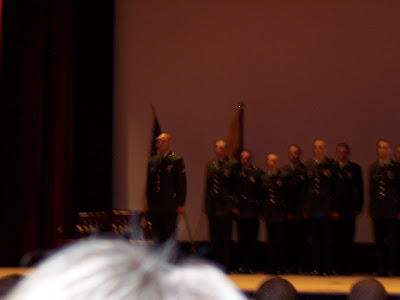 Once the ceremony was all over, the soldiers headed to their barracks and packed up. Ain't he handsome? 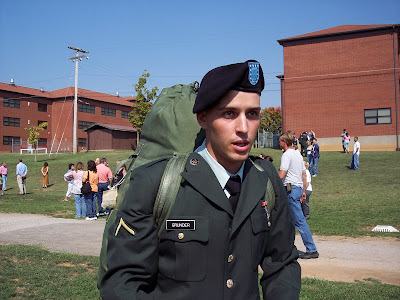 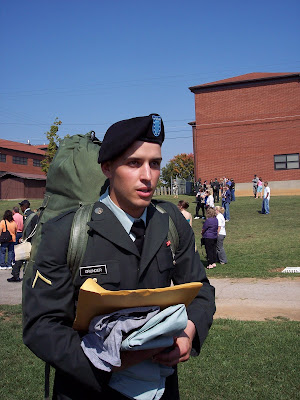 Many moons ago, he was my little baby boy, now he's a real live US Army Scout..."First in and the last out".

Well, one more night back in the noisy hotel, up at 3 stinking 30 in the morning and off to the airport. We boarded our flight, Scout boarded his and we all met up again in Boston several hours later. While we were in the air and everyone was snoring around me, I snapped this photo of the sunrise. 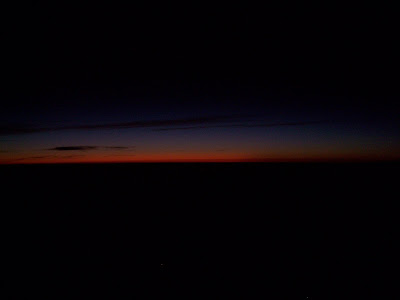 Hopefully the sun is rising on a new life for our soldier, our Scout.
Posted by groovyoldlady at 2:39 PM

Wow! I'm proud too! The girls love the new look--bald! Thanks for posting the pics. It made me happy to see that look of well deserved pride in achieving a goal through hard work and discipline. Go Scout!

Thanks to you and your son for his service.

What a great trip and such a handsome young man! My hats off to him for his service to our country!

You must be so proud of him! He's definitely a hero!

HE is very, very handsome in his uniform - I like the bald head too!

Sounds so familiar - many of our trips have been like that. Totally exhausting! Glad you're home. I'm so glad Scout is finding his way and has a new nickname!

I am so proud. So proud.

You must be so proud of your son. It is such an honourable thing he is doing. And he is very handsome, indeed !

What a handsome young man. What an emotional time I imagine. I loved seeing him in uniform.

Very Handsome. I have a close friend who is a Cavalry Scout in the US Army...he jut left to go overseas....