Some time ago - I'm not exactly sure how it happened - I connected online with a woman on Squidoo named Marti Lawrence . Marti runs a group on Squidoo for authors and I joined. After all, an aspiring author such as myself, with undeniable wordsmith skills and publishability needs as many writing connections as possible.

Marti is a wonderful connection because she is a real live PUBLISHED author - oh yes - and that means that our connectedness lends me tremendous credence as a fellow writer. As a sidenote, I've also actually written a comment on Randy Ingermanson's blog - WHOA! I am chumming with published authors all over the place; I am on the cusp of fame! (Or grasping at the heels thereof…)

Where was I? Um…(Groovy struggles to focus) Aaaah, now I remember.

Marti decided to have a lens contest amongst the authors in her Squidoo group - or somewhere. (I'm a little hazy on the details.) You all know how I LOVE contests! So I entered, or she entered me, or someone sent in my link or, um, something…

I WON!!! (Of course, I was the only entrant, but that's entirely beside the point)

The Prize? A copy of Queen Klutz: The Comical Misadventures of a Very Clumsy Woman by Marti Lawrence herself. Whoo-hoo! 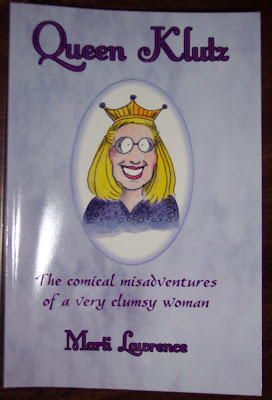 And so Marti emailed me to let me know that because I had won the contest by default, she was going to mail me a copy of the book.

I thought "What contest?" because I didn't even remember that there had been a contest! But hey, a book is a book and winning is cool and Marti was awesome to write a book, have it published, forget to autograph it, and then pay to ship it to me. I was thrilled!

And now I must inform you that the book is here. Not only is it a great read, but it is also imbued with some very special powers.

You see, Marti is a self-described "blutz". For you lay-people, that is a clutz who has bad luck. That's what she writes: humorous essays about bad stuff like lightening strikes and broken bones and fires and automobile accidents and other, equally cheerful topics. She has a marvelous ability to step outside the ugly and see the funny. She also has the knack of passing her blutziness on to her readers.

Her book arrived at my house during the worst April noreaster since Noah's Flood. Our power had just gone out and I was on the phone doing my civic duty (reporting the outage to the power company) when Rural Mail Dude pulled up to the door and lay on the horn. Kudos to RMD for not rubber-banding my package to the mailbox WAY off at the end of the driveway in the pouring rain. Un-Kudos for the impatient honking when I'm on the phone reporting important detailed information to a machine.

I dropped the phone and rushed out the door and immediately slipped on the slick steps. Fortunately, I caught myself and the only harm was a lingering whiplash headache. Actually, I woke up with a fairly nasty headache and the girlies maximized it by insisting on reciting all their Bible verses for school in LOUD, high-pitched squealy voices and then giggling hyterically. So this little slip only reinforced my earlier bout with pain.

Don't worry though, I paid the girls back by spending a good solid hour preparing a new recipe for lunch - they hated it. Which brings up a question I've been meaning to ask. When YOU prepare a new recipe and your family hates it, what do you do with the food? Do you eat it all yourself because your mother taught you to not waste food? Do you force your family to eat anyway? Do you throw it out? Do you feed it to the dog? Do you place it in an unlabled serving dish and "lose" it on the buffet table at a church dinner?

Hmmm. I have digressed. Back to my riveting story.

Once inside, I took 2 Excedrin, got out an ice-pack and opened my package. A book, Oh goody! Since the power was out and the internet was fritzed, I had time to read. I read about Marti's broken ankles. I read about the lightening strike and about the fire (not related) and the evil pumpkins and car troubles and the severed finger and her blutziness - and I laughed about it all (Yes, really - I'm telling you, she's funny!)

About that time, the power came back on. I stopped reading and ran around the house resetting all 27 blinking digital clocks. I cannot read when things are blinking at me! I also went to flush both the toilets. We have a well. No electricity? No flushy.

I was just about to sit down to read some more and the power surged again. Off, then - flick, flick -on.

I reset everything again. I turned the answering machine back on and I checked the filter on the fish tank. It wasn't working. I unplugged and replugged it. Nothing. I tapped it and talked to it. I reprimed it and shook it. Nothing. I checked the circuit breaker and did a rain dance wearing nothing but a bedsheet. All to no avail; It's dead now.

I called the filter lady and she said it's an easy fix: We mail her the fried motor and she'll send us a new one. In the meantime we have to clean the tank more often (every three hours) and feed the fish less often (every three weeks) or they'll die. Sigh.

..shut itself off. As in the "Power" light started blinking again. I turned it back on and it's played the same game with 2 more calls. So if you're trying to call me to tell me I've won another contest, I may not get the message for a while!

At any rate, Marti's book is hilarious and it has short, easy-to-read chapters, so it makes a great "bathroom reading" book. I know you'll all want a copy, so buzz on over HERE to get a copy for yourself.

Still wavering? (Are you very afraid?) Check out Her blog...

The day after I wrote this the fishy pump started to work all by itself and the answering machine is back on the job. (Insert Twilight Zone theme music!)

*********
Training Update
*********
The storm finally petered out yesterday. Mulletman took a training ride. He came back looking VERY tired and told me he had battled a strong headwind all the way home.

This somewhat weakened my already wimpy resolve to ride in cloudy, windy, 45ºF. weather. But then I sat down and looked at our Trek team's training blog. The team is going to ride 30 miles on Saturday morning.

30 miles? I've only had one ride and it was only 11 miles and it almost killed me. (Not really, but I like to be dramatic and incite LOTS of sympathy!)

I really NEEDED to ride again. So, I donned my bike shorts (and wore wind pants over them!) and helmet. However, I was going to be infinitely smarter than Mulletman. I was going to ride into the headwind first so I'd have a tailwind when I was tired on the second half of the ride.

It ws a nice try. I don't know how it happened, but I had a headwind BOTH ways.

Only in Maine…
Posted by groovyoldlady at 7:17 AM

Hi Groovy! Thank you for the link! I'm so ahppy you enjoyed the book! Sorry about the bad luck that struck, though! Hope things are better now! Best wishes for a wondeful day - plugged you in today's post!

I will check out the link! Good for you!
I'm an aspiring writer...but lately, just a lazy one and not so aspiring.
;)

Congratulations on winning the uncontest! A book is a good prize any time. The training sounds brutal! I could not do it.

As for recipes that don't work out at home - I take them to work - they will literally eat anything!

Well, congratulations ... I guess? Does winning/reading the book make one a blutz? Hmm....

Well when I saw your calling card "groovyoldlady" at my sister's blog, I knew I had to rush on over and get to know you! I'm so glad I did. I've been scrolling through your blog and just now finished listening to you "flapping your tater-trap" on the radio! That was so fun!

Hi Pam! Welcome to the insanity that is my life!

Damselfly, Let's do an experiment. YOU buy the book at let us all know if YOU get blutzed...

We're off to Georgia in the morning, but Kev and I managed to get Part VII done just in time.

Have a great week-end and see you next week!

Hey Groovy,
Congrats on the book that is so cool. I am an aspiring writer also so I will have to come here and get tips from you my friend. Hope all is well I am doing that post for you today. Btw you have been tagged if you have a chance stop by my blog unless you did this one.