In Honor of my favorite guy -to whom I have been married nigh onto 25 years - here's a Hehe. It's just like a Meme except it's not about Me, it's about HE. :-) 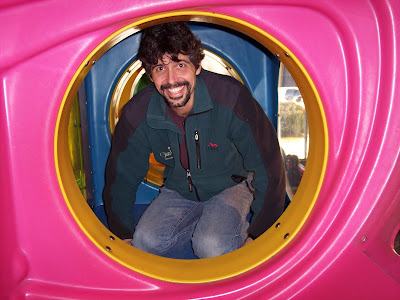 I stole this from Ozark Crafter. (Hi Michelle!!)

How long did you know each other before you got together? a couple of weeks - I flirted and he asked me out. We've been together ever since.

What physical features attracted you to him first? Very sexy wavy dark hair

What color are his eyes? Dark Brown

His hair color? Dark Brown with a sprinkle of salt

Hair style? A mullet. DUH! This is why we call him Mulletman!

How did you meet? My date and I stopped at a fast food joint and there he was...and I flirted. (Don't worry, I'm reformed now!)

How serious is it? We dated 2 years and have been married 25 years on April 3.

Are you "in love"? Very much so. We are best friends.

Do your parents like him? They hated him when we were dating: He had a bad temper and my mom was afraid he'd be abusive (he hasn't been) and my step-dad thought he was a loser because he didn't want to be an officer when he joined the military. Now my mom adores him and my step-dad is out of the picture.

Do you trust him? With all my heart!

Would you share a toothbrush with him? Only in an emergency (been there, done that).

Would he let you wear his pants? Yep. They're tight in the waist and WAY too long, but it's been necessary once or twice.

Do you have a shirt of his that you sleep in? Nope.

Do you like the way he smells? After Shave? - Yes! Bengay or Tigerbalm or Vick's? No! (Even worse is when he uses all 3!)

Can you picture having kids with him? Had four and I pictured more, but he is "done" :-(

What bothers you the most about him? He wants to interact ALL the time when he's off work.

Does he have a temper? Absolutely, but maturity in Christ and maturity in years have mellowed him considerably.

Are you happy to be with him? Yes indeed, unless he's been off work for several days and is following me everywhere and wanting to talk, talk, talk! Then I start giving him the look and saying things like, "Isn't it time for you to go back to work yet?"

Does he embarrass you in public? Oh yes. Whenever he can. Don't feel bad for me, though. He owes me!

Does he smoke or do drugs? No

Does he have any piercings? No

Does he have any scars that you know of? Ah yes, the ole skinned-his-back-body-surfing-in-Daytona scar. He also has scars from a couple of surgeries.

Is he a party dude or stay at home? He's a MAJOR homebody.

Is he outgoing or shy? He's much more outgoing than he used to be.

Does he love his mama? He loves his mama and he takes her out to lunch once a week or so.

Would he hang out with you and your friends? For a while, then the estrogen gets a little thick and he has to do something manly like wash the car.

Sing? Hahahahahaha! That's a good one! NO! But he plays guitar and drums and I sing.
Posted by groovyoldlady at 7:33 PM

Oh...a hehe...you are a riot!
And I loved reading this...I just feel like I know your hubby, Mr. Mulletman, now! He sounds like a keeper to me! :D

Oh, and if my hubby followed me around wanting to talk, talk, talk, I'd probably faint away! ;)

Well hello yourself! Liked your answers on this one. You always make me smile! huggles!

Hiya Groovy..I'm back:-) I so missed all of you, I feel like I've been gone away a month instead of just a few days! lol I so enjoyed your answers...sounds like Mulletman is the perfect guy for you! So, after 25 years of marriage...who deserves the medal more??? hehe The anniversary cake you made is just gorgeous!!! You are certainly a very talented lady and saying that, congratulations on winning the Blarney Story award!!! Woohoo! I just knew you would win, your story was so hilarious:-) xoxo

This was fun stuff. I should do it about DC.

Lots of pneumonia going around - my dad and my son both in the last two weeks. Son is much better, Dad is getting there.

Hubby and I will be married 20 years this August, but we dated for years and years before that. I met him when he was 21.