I am a cake decorator. More precisely I consider myself a frosting artist. Those of you who have known me for several years know that It's not vain braggadocio for me to say that I make pretty darn good cakes for money (and for love). They look good and they taste good, far better than those plasto-sugarfests you can buy at the local market.

Here are a few recent samples for those of you who only know me via the Web (And yes, they taste every bit as good as they look!): 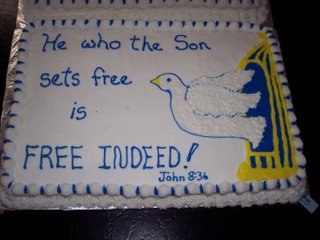 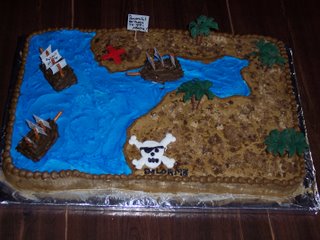 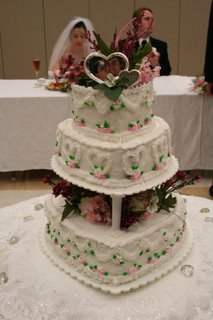 However, I have been doing the traditional wedding and party cakes for 20 years or so now. My creative genius is bored and has decided that I should venture into the realm of festive, decadent dessert cakes.

Fortunately, I have not yet attempted to make one of these for money, because I keep screwing them up! Yes, I, Groovy the cake baker extraordinaire, have made several outright flops. And every one of them was for a party, usually at my house.

There was the lemon layer cake that looked lovely, but was so heavy it took a fork-lift instead of a fork to lift the pieces. There was the chocolate layer cake that slid itself into a gooey, ugly mound and oozed around like it was alive. Then there was another cake (survival instincts have blocked out most of the horrid details like which recipe it was) that actually STUCK TO THE PAN and fell into pieces! I was totally aghast. I haven't had a cake stick to the pan - EVER. Totally weird (and frustrating)!

Fortunately in addition to zeal, I am also blessed with cheapness (I ain't throwing that out; the ingredients cost me a mint!) and ingenuity. When life gives you a ruined cake, make a trifle. I crumbled up the losers, layered with pudding and whipped cream and got rave reviews.

So, what in the world possesses me to A) attempt an untried recipe to serve to a crowd and B) KEEP ON doing the same idiotic thing? Adventure? Poor memory recall? Stupidity? I really dunno, but yesterday I did it again.

We had a Christmas Party at our house last night for our church's worship team and their families. I knew this party was coming, so I cleaned the house before we went to New York. All I had to do was rearrange a bit and make coffee. Then my friend Marvelous Mary called; There was plenty of food coming, but we were short of desserts.

Hmmmmm. While I was visiting Funsocksgirl I perused her massive collection of three cookbooks and came across a gem, The Twinkie Cookbook

. In it I found a marvelous sounding recipe for a Twinkie bundt cake.

It was FOOL PROOF.

It was a FLOP!

The idea was that it would look like one of those cakes surrounded by lady fingers, but I used the wrong type of bundt pan. It took an extra 30 (!) minutes of cooking and the ends of the Twinkies stuck out and got burnt . It was uneven and ugly and threatened to split. What to do, what to do? I wasn't about to throw it out!

So I sawed and I leveled and I trimmed until it was fairly even, then I put it on a pretty cake stand. I dusted it with powdered sugar and green, white, and red jimmies (sprinkles, for you non-Main-ahs). It was a hit!

Once again the party was saved and my reputation remains intact. If only they knew...
Posted by groovyoldlady at 12:46 PM

It shows I haven't known you long because I had no idea you were a cake decorator!! From the pictured cakes you're showing here, you are indeed VERY good at what you do! Wow! I love to bake but when it comes to decorating a cake like that, I'd have no idea where to start! lol Isn't it nice when a FLOP can turn into something of a HIT? lol Great going!!! I'll be gone a lot this week until after Christmas so in case I don't get a chance from now until then, I want to wish you and yours a very Merry Christmas!! xoxox

I'm always trying new recipes on company, and flopping royally. I like the idea of taking a flop, and turning it into a hit!