Warning: Groovy is ill today. She shall strives to spell coreectly and use verbs that agree and punctuate properly but no promises. Her brain are mush! 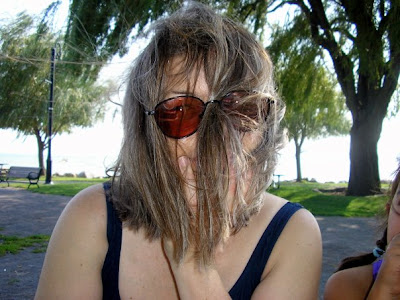 Yesterday morning I opened the drawer in my bathroom and pulled out a brush to address a critical bed-head situation before the Bad Hair alarms went off and local Hair Rescue Units descended on our humble abode with tv cameras and bright lights in tow.
I wasn't in the mood for drama at 6am, don't ya know.
What was this? This was not our hairbrush...
... it was the girlies' brush. Somehow it had migrated from their bathroom to ours.
Oh well, it was our best brush, so I would use it. But it seemed rather heavily laden with hair - Silly-Head's hair is rather thick and long - so I decided to pull some of the excess hair out before addressing my own salt-and-pepper locks.
I pulled out alot of hair. A. LOT. OF. HAIR.
And that's when I noticed the lint. From stem to stern, the bristles of the brush were loaded with little wads of well packed lint. Every Bristle. WADS of lint. Loads and loads of disgusting lint.
Being the good mother and housekeeper that I am, I decided to redeem the time by cleaning the brush now, instead of later. "Now" became "one and one half hours of prime entertainment for my much bemused husband" as I scraped and tweezed and grumbled and eeeeewed.
Why did it take so long? You might ask. Is it because Groovy is an OCD perfectionist?
*snort* Hardly!
It took so long because every stupid bristle has a little knobby on the end - presumably to prevent careless brush users from piercing their scalps with sharp bristles. That's all well and good; I am certainly a proponent of bloodless brushing, BUT those little knobbies also trap the lint so you (and here "you" means "I") can't get the lint off the bristles! Instead it collects and mats together so that there is no easy way to pull it off past the knobbies. Worse yet, it is a round brush, so it has more bristles than the average flat brush. At least, it seems that way.
I had to snip and pull and scrape and tweeze and mumble and gripe before it was done. Then I put it into a sink filled with hot water and shampoo. I let it soak while I was at a doctor's appointment, then scrubbed it when I got home. Now it looks like new. 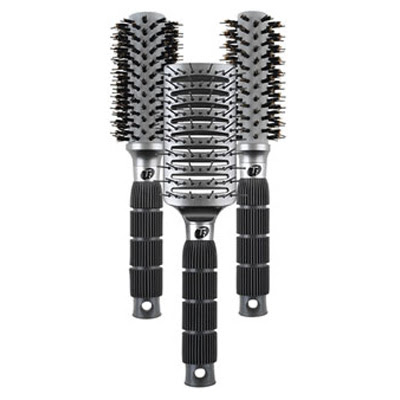 I don't want anyone to use it!
Ok, I know what you're thinking: You're thinking, "Why am I here reading this lame blog when there is chocolate out there calling my name?" That, or you're thinking, "So why doesn't Whiny Gal buy herself a brush sans knubbies?" Well, Groovy has one. A very nice one, in fact. However, it is so soft that no one likes it; It won't go through hair with any substance or body. ie. I, sole Groovy owner of thin and wispy hair, am the only one who can use it. The only reasons keep it are 1. It weren't cheap and 2. It's easy to clean!
So, the moral of this story is we should all be bald. Then, like Larry, we wouldn't have to bother with brushes at all!
******************************
In other Groovy news: My mediocrity continues... Not only am I having brush issues, but I am also having blog issues. I went o deChristmas my page and make it more Springlike. Alas, all I've managed to do is add a new header. All the Blogger gizmos for changing colors, etc. seem to have disappeared! So my readers are cursed with red/blue/green weirdness until I get this figured out. Many apologies!
Posted by groovyoldlady at 8:05 AM

SO funny... I went on a silly song rampage a couple of days ago and of course listened to that song. :-)

I'd have thrown it away and gotten a new one. Yes, I'm that lazy.

Ha ha! Those little knobbly ends are the reason I use a comb - easy to keep clean. And I have long, thick hair, too, but I still love my comb.

How did you know about the chocolate...?