The Evolution of Groovy

Ah yes, 'twas another solidly busy week. I've been so busy the past year or two that I think I shall spend my old age reliving these days just so's I can remember how I actually spent my grooviness!

I taught biology on Tuesday - it was a great class! One interesting discovery we made was how persistant scientific falacy continues to be propagated in textbooks and encyclopedias. Perhaps you remember seeing this "progression" of evolutionary horse development in your school science texts:

The problem is/was this alleged line of development over millions of years is a completely unproven, or more accurately, disproven! According to the Field Museum Report in January of 1979 (1979!!!):

Well, we are now about 120 years after Darwin, and knowledge of the fossil record has been greatly expanded...ironically, we have even fewer examples of evolutionary transition than we had in Darwin's time. By this I mean that some of the classic cases of Darwinian change in the fossil record, such as the evolution of the horse in North America, have had to be discarded or modified as the result of more detailed information.

Why did this "classic" example of macroevolution have to be discarded? First of all, geography. There is no site in the world where this supposed succession of change can be seen. Instead, the fossils were gathered from several different continents and then combined to try to create the illusion of a macroevolutionary sequence. However, if such a sequence ever had occurred, the fossils would naturally be found, at the very least, all on the same continent.

Another issue is time. According to the evolutionary theory of horse development, Eohippus would have had to live BEFORE the next "stage" of animal, Mesohippus. Then in strata that were a few million years newer, we would find Merychippus, etc.

The trouble is there seems to be no pattern whatsoever to the placement or dating of each of these creatures. In fact Eohippus has been been found in rock strata just as near the surface of the earth as Equus (the modern horse)!

Lastly, even though the leg bones and skulls of these creatures do bear some resemblence, the rest of their bodies do not. The number of ribs and vertebrae vary from creature to creature with no discernable pattern...

Naturally, when I am teaching science, I usually end up perusing extra resources for supplemental information. In spite of the particulars I have just presented, look what I found in the 1990 of World Book Encyclopedia: 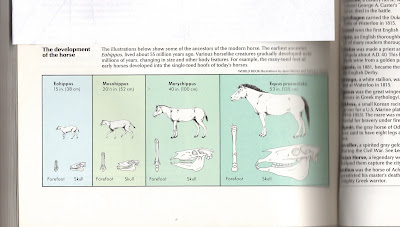 Disheartening, isn't it? Worse yet, guess how they'd changed the entry for the 2005 edition?

Looks like World Book needs to undergo some evolution itself!

I've only given a very bare bones (*groan*) presentation of the facts here on my Groovy blog. You can read more on this fascinating subject HERE.

Speaking of evolution, today I will be working on the microevolution of a homemaker by teaching Girly-Girl how to clean a bathroom properly. I know that this process will take millions of years, but it's still worthwhile because some day I will have evolved into a Groovyoldlady of Leisure. :-D
Posted by groovyoldlady at 8:06 AM

Girly-Girl will learn & Groovy will NEVER be a Groovyoldlady of leisure. Take my word for it!!! I am busier than I have ever been :o) You will be, too, and loving it, just as I am.
Susan

You go, Girl! Preach it, Sister! After watching 'Expelled: No Intelligence Allowed', I do not put it past the evolutionists in high places to push this junk on our Nation's kids for their own purposes...Hitler's Germany all over again....praise God, Christ the King is coming is very soon!

Isn't that amazing. Science has changed so much all the years but who is keeping up? I am glad to know your grooviness is staying on top of things. Have a great weekend!