Adventures at the Airport

I suppose, since you're here, you've noticed my tremendously lame blog decorating job. I worked very hard not to exceed anyone's expectations of mediocrity.

I think I succeeded.

Yesterday, we were supposed to buzz down an hour and a half to the airport in the big (*snort*choke*) southern city of Portland and pick up Scout at 12:34 pm. He was flying to Maine to spend his 1 month of post deployment leave.

Mulletman was scheduled to work, but managed to switch days so he could go with the girlies and I and spend more time with Scout. We set out in a festive mood and were pleased to arrive at our destination a full 20 minutes early. That would probably be an inadequate time frame if our "city" really was city-sized, but it isn't. The airport (largest in the State) only has 6 gates. There's only one escape route from the planes as they land; only one tiny bar/restaurant, only one comfy waiting place with chairs. There is a gift shop. It has 8-9 books, a few magazines and a small display of Maine souveniers.

There are, however two sets of restrooms, with totally cool and automatic everything: faucets, paper towel dispensers, blow dryers, flushes, and rotating sanitary seat covers. We are small, but we are modern!

All that is to say getting there early isn't all that necessary. In fact, this getting-there-early plan was an exception because we usually just slide in right on time or even a few minutes late when we're picking someone up.

Mulletman scanned the Arrivals board. "Which flight is he on?"

There was only one up there scheduled for that time, and the board told us it was running about 20 minutes late. No problem. We'll just goof around until our soldier strolls down the stairs or the escalator.

Escalator? Silly-Head was full of mischief, "Mama, what happens if you try to go UP the DOWN ones?"

Before Mulletman could stop us, she and I were galloping up the descending escalator. I had my purse in one hand and a soda bottle in the other. Silly-Head was ahead of me and was doing great. But I was having a tough time. It was really hard to move faster than the stairs so that I actually went, you know, UP. It was exhausting! Worst of all, I was quickly realizing that it was also dangerous and that I had put my little dumpling in danger.

Yes, sometimes this mediocre blogger is also a mediocre mom.

I kept admonishing her (as I gasped for breath) to "Be Careful!!" Mulletman and Girly-Girl were running up the stairwell next to us and he was alternately laughing and saying, "That's like something I would have done!!! I can't believe you did that!"

Somehow my little darlin' made it up safely and I was (finally) nearing the top. I was starting to get a bit dizzy from all the conflicting movement and it was getting harder to move fast enough to conquer the last little bit at the top. You know, the bit where the steps are flat and then fan out into full sized stairs? Those are a bit tricky to master going backwards!

In fact I stumbled and I tripped and I crawled (very quickly!) and finally - oh joy of joys! - I scrambled off the stairs of doom and landed right at the feet of a black booted, stern-faced, gun toting airport security guard.

Mulletman was already at the top and he turned to the guard and said breathlessly, "Don't worry sir. You don't need to say a word to her. I'll take care of her!" He was trying to sound grim, but really he was just barely covering his mirth at my stupidity. The guard growled, pointed to sign that indicated only ticketed passengers were even supposed to be in that area, then crossed his arms and glared at me.

I must confess, I got down the stairs much quicker than I got UP the escalator!

And now I have 3 lovely, parallel bruises and a couple of dents in my shin and some very sore neck/back muscles that will cause my physical therapist to roll her eyes and shake her head (and take more of my money). And I totally deserve all of it!

Once we shook off that little adventure (and stopped laughing/crying), we sat down to wait for Scout's plane. Finally it was announced and the passangers started coming down. No Scout. We waited. No Scout. The airline crew came down. No Scout.

Scout has no cell phone and neither have we, so there was no way to contact him to ask him! Mulletman decided to check with the airline. Their counter area was closed and unmanned. He went to the airport information booth. There was no one there.

We went over to the baggage claim area and finally found a fellow from the airline in question. He checked his records and said there was no record of a Groovy Scout having tickets for flight we had come to meet.

After much discussing and gesticulating we decided to go to lunch and then sweep back by the airport for one more look-see. Oddly, the restaurant we were planning to eat in was missing - as in leveled to the ground! So we drove a bit further to choice number two. We weren't terribly familiar with the menu, so it took us a while to order. The waitress was nice enough (though we had a bit of a tussle over chunks in the pizza sauce), but she was s-l-o-w. We were really hungry by the time our food came! Silly-Head dragged the meal out even farther by insisting on scraping every last chunk off her pizza crust.

The point being that this whole lunch idea took far longer than we would have anticipated.

Nonetheless, we did finish and we did leave and head back to the airport. We felt certain Scout wouldn't be there, but my conscience wouldn't let me go home unless we checked one last time just to be sure we'd covered all our parental bases.

Mulletman pulled up into the drop-off/pick-up zone and I slipped into the terminal. I checked the waiting area. No Scout. I looked in the bar/restaurant. No Scout. I did a quick scan up and down the length of the airport. No Scout. I shrugged sadly and turned toward the door to leave. I took 2 or 3 steps and heard, "HEY! MA!"

It was Scout. It was 2:30 and he had just arrived. If he had arrived 5 minutes later, or we had returned from lunch 5 minutes earlier, he would have been left at the airport for HOURS!

God is so GOOD!

Mulletman was seriously surprised when Scout came back out to the car with me. :-D It turns out that the drive from Ft. Hood to Austin for his outgoing flight took considerably longer than he'd been told (or his driver friend had poor directions) and he missed his first flight. He tried to call us at the house to let us know about the new flight plans, but we had already left.

Scout seems a little more relaxed and like himself than he did on that last visit. I'm sure knowing he doesn't have to shoot right back to Iraq helps alot. Hopefully he'll be better able to enjoy time with his kids, friends and family this time 'round.

And so ends Groovy's adventures in the airport. Now, let's all jump off this roof together! 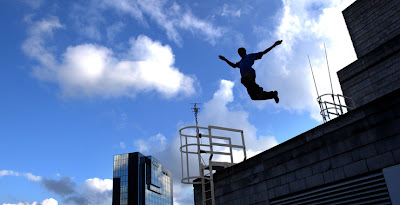 Posted by groovyoldlady at 7:09 AM

I know it's not funny, but your description of the escalator incident is hilarious...

God's timing is always perfect, even when ours isn't!!! The escalator "incident" gave me the chills. PLEASE don't do that again.
Susan

Mommy, Oh, but it WAS funny! We're still chuckling. Every once in a while I bump my bruised shin on something and say "Owwww!" and Mulletman bursts into peals of laughter again. ;-)

T, Yea! Thanks for setting him up with a phone. For the first time in TWO years I finally have a way to get ahold of him! Of course, it wouldn't have helped on airport day because WE don't have a phone...

I'm glad you made it to the top and weren't hauled off to airport jail. I get dizzy just going down an escalator the right way - all those stripes. Add a suitcase, and I almost panic.

I love the Portland airport - so easy. Except for no affordable place to eat!

I'm so very thankful that the pizza was slow - what a wonderful evidence of God's timing. Have a wonderful time with your soldier boy.

So, I don't imagine this will convince you to get a cell phone in the near future...but then, you DO have an ipod now. Where were you wanting to eat? I'll guess and say Ground Round. And I'll also guess and say you ended up at UNO (UNO, the home of nasty lumpy pizza sauce, apparently!)
Oh, and no real comment on the escalator incident. Am I surprised? Um...NO! You're a rebel to the core! : D

If it was UNOs, I don't blame her for not being happy. One of my least favorite places to be forced to eat.

I can just see you on that escalator, beautifully written.

Also think it's funny how people who don't know Maine wouldn't believe our 'international jetport' has all of six terminals, two floors and not much else. People from big cities just cannot believe our jetport is so tiny.

Speaking of writing... We're still meeting (now at B&N) for writing (NaNo), year round on Wednesdays if you want to come hang out!

'Twas UNO indeed. The waitress told us unequivocably that there were NO chunks in the kids' sauce.

I liked the taste of our "grown-up" pizza, but both the man and I got terrible gas/heartburn from it - and it was just tomato and cheese!

Thanks for stopping by, Ken! I wanted to do NaNo this year, but life is a very fun merry-go-round that leaves little time for writing right now.

'Scuse me, I need to circle my way into the kitchen to bake cookies for 4-H tomorrow and then snowblow the drive and then read to the girls and then make frosting and hard sauce and gather all the 4-H craft stuff and...

You wild woman, you. I cannot believe you landed at the feet of a security guard. That is too funny.

So glad you were able to catch up with Scout after all. That is brilliant!

RE: Uno's -- I used to eat there regularly when I could get their Ceasar salad and the clam chowder in a bread bowl. And then...

The took away the bread bowl and made both their salad dressing AND chower LOW FAT. ICK ICK ICK... I complained bitterly, to no avail.

And now I don't eat at Uno's anymore.

Have a great visit with Scout -- how awesome that he is here over Christmas.