*NOTE* Sorry it took me so long to get this post up. I got 4-5 days of peace and rest while I was sick and then BLAMO! Life hit me full force again. ie. Cuh-razy schedule here. Nonetheless, here it is. Enjoy!

Well, I wasn't feeling too hot on Thanksgiving morning. Fortunately, Jenn with two N's had already made and delivered rolls to us (Bless her heart!) and GrammaJ and Grammy were making most of the side dishes. 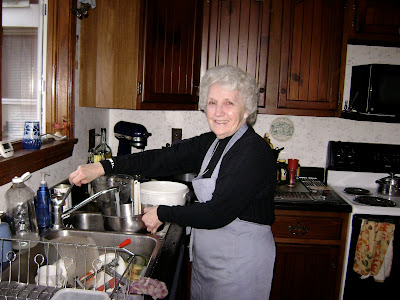 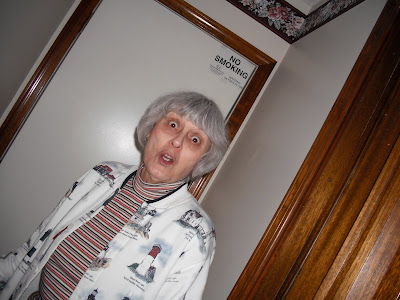 The girlies were going to do all the table setting and decorating. All I had to do was make some stuffing and get the turkey breast in the crock pot. Then I'd make 2 pies later in the day.

First on the roster...get the turkey going by 7am.

Here it is, stuffed and ready to crock: 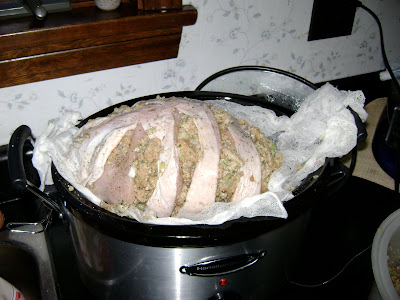 Now I cover it with the wine soaked cheesecloth: 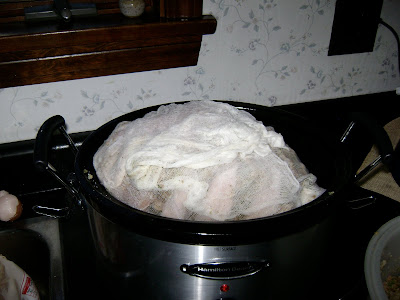 Pop on the lid and.....uh-oh. In an typical overindulgent American move, I bought a breast that's too big for my crockpot!!!!!! 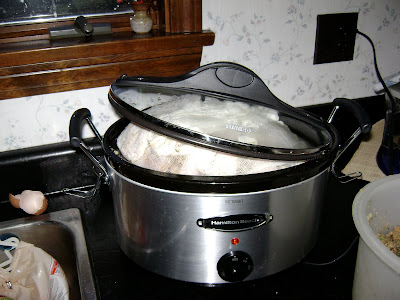 What to do?! What to DO?! I know, I'll cover it with foil to seal in the heat...later I also topped it with a couple of kitchen towels just for good measure. 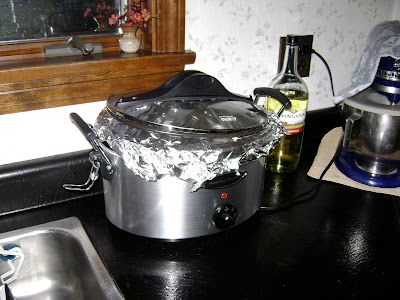 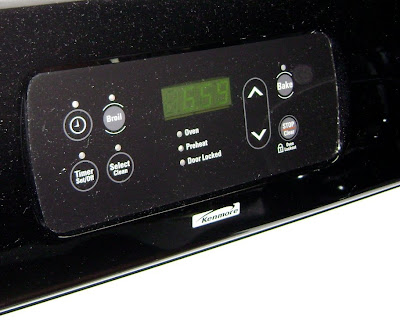 Of course, later it cooked down a bit and I was able to actually close the lid properly. 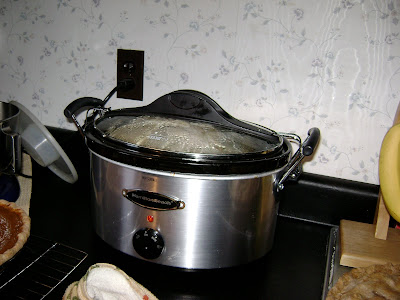 I was a little concerned because the recipe gave times for a 5 pound breast, and mine was 8+ pounds. I really wasn't sure how long it would take to cook. But it came out beautifully, see? 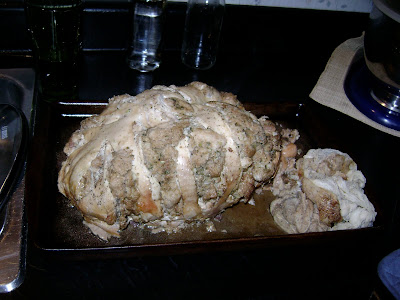 It's a little pale - I could have browned it in the oven before serving, but chose not to. But it was amazingly moist and SO flavorful and waaaaaaaaay easier than roasting and decarcassing a whole bird. I'll be doing it this way from now on minus the stuffing; I'll just do that in a separate baking pan to make carving/serving easier. I hate to say it, but our family is a picky set and many of them don't care for stuffing. Bt the way, I fed 8 people and we have enough leftover to feed at least another 8!

As I said, the girls were in charge of the table and decor. First they dressed themselves in their own interpretation of Pilgrim fashion. 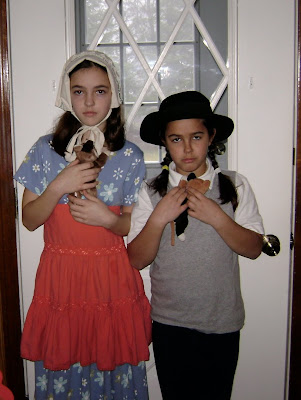 And here's their decorating handiwork (Girly-Girl took some of these shots):

The table - I think the photographer was standing on a chair for effect! 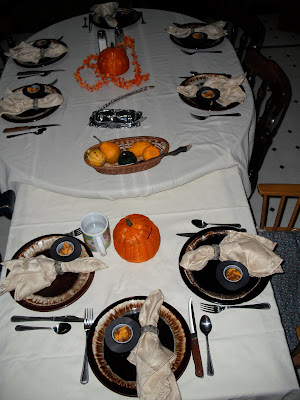 They (and I) also painted some Fall pumpkins and made some wall decorations: 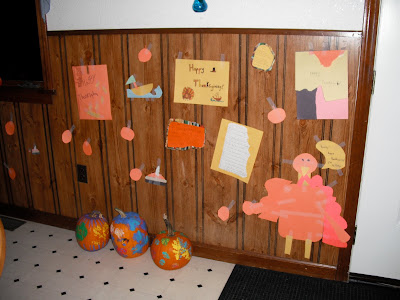 If you look closer you'll see three poems there written by Girly-Girl, Silly-Head and Moi. Click the pics to enlarge and see if you can guess whose is whose. I know you'll never guess which one is mine! ;0 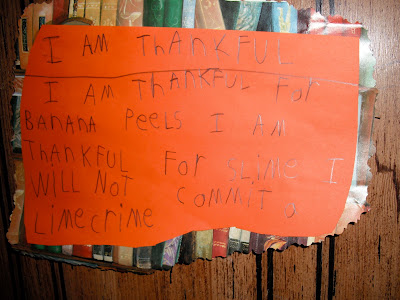 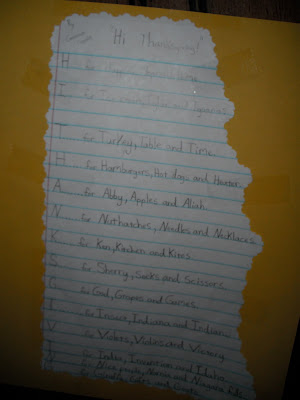 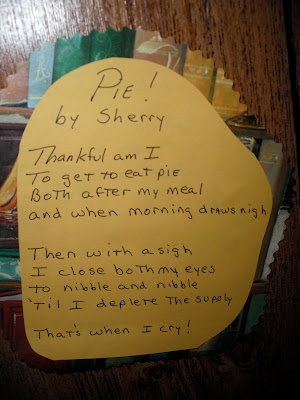 Mulletman was supposed to write one too, but it didn't happen this time. However, he wrote a lulu of a poem for Jenn to thank her for the yummy rolls. If only I had copied it! 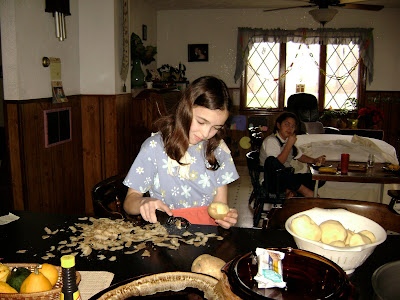 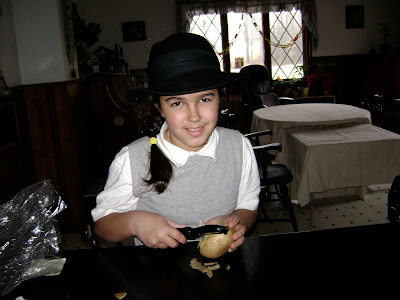 AND they made more decorations... 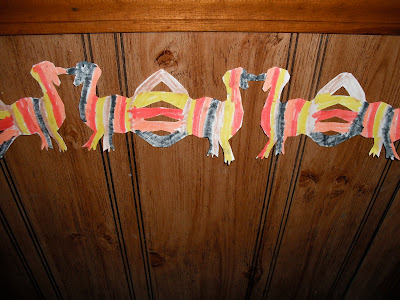 ...and MORE decorations! We each wrote some things we were thankful for on all the loops. 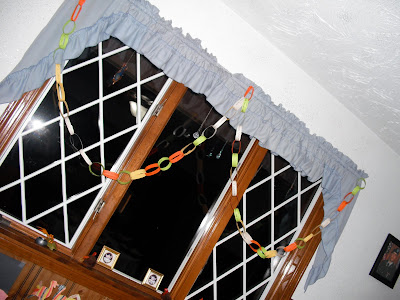 Finally, here's the Buffet all ready to serve: 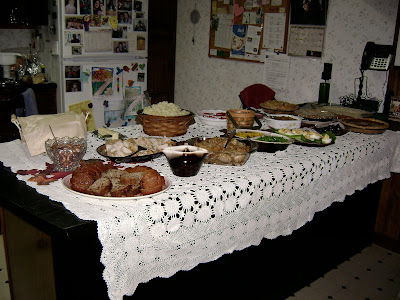 And here are all the guests (except Moi, of course) Do you think I could get one, just one, of everyone looking at the camera? Noooooo-ooooo: 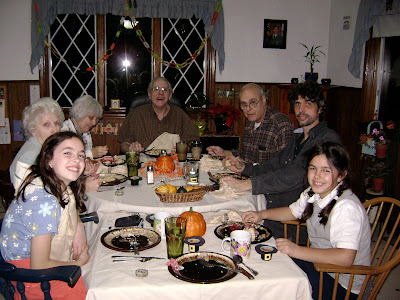 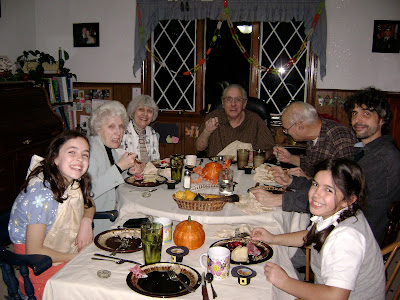 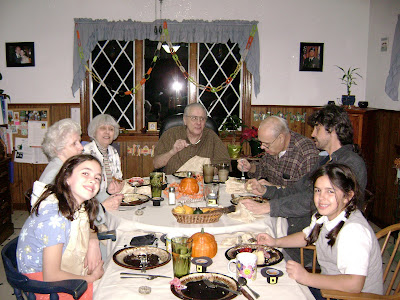 But I assure you, I was indeed there. See? 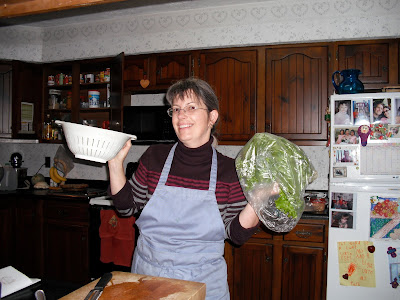 Hope you had a wonderful time counting YOUR blessings!
Posted by groovyoldlady at 8:13 AM

What a spread and it all looks wonderful. Your family seems to have a lot of fun and that is great.
Susan

Thanks for the play by play; now I can cook my own turkey! :-)

So charming -- decorations, costumes, poems... every word! Looks like you & your family had a wonderful celebration!

That is such a good idea about cooking just the breast. I did that for Christmas last year and it was much tastier.

You have a beautiful family!

So, who's the guy I don't know? And Grandma J just gets cuter all the time!

That was fun seeing your Thanksgiving adventure! I had never in my life heard of doing a turkey like that. Maybe I'll give it a shot sometime. I dressed up like a Pilgrim miss when I was a girl, too, one Thanksgiving. My hubby and sons did most of the work on Thanksgiving. I provided the ambiance and taught JB how to make gravy. I'm not such a kitchen queen. Although, the day before I did make Pumpkin bread and carrot cake for Brad's Thanksgiving birthday.

That was the most enjoyable Thanksgiving post I've read thus far. It sure was more engaging than mine!

What a fun day you all had - love the poems and decorations! And the pilgrims are perfect. I hope Christmas is just as great!

Thank you, everyone! And NC4, that's the famous Uncle GrouchyPants! (Grammy's brother from Madison)