What? Why Didn't Somebody Tell Me That Today Was/Is a Holiday???

Several days ago I decided that today was absolutely going to be a complete down day for me. I've been too busy and overloaded lately (I know, I know...) and I've had a painful neck/shoulder condition going on for almost a month now.

Those of you who live with chronic pain have my deepest sympathy; A busy schedule coupled with pain that limits my activity has made me just a wee bit CRANKY. I had x-rays taken a week ago, but haven't heard back yet as to whether I am dead or alive. That's one situation that I will take care of today. You know, the ole "What'd-you-people-do-with-my-x-rays-and-WHAT-did-they-show?" routine.

In the meantime, nothing was on the calender for today so I decided to take today off. No school (to speak of, though we've already done art, practiced piano, discussed migration, molds and fungi, forensic science, and international holidays), no housework (laundry doesn't count, does it?), no errands or car trips or outings, no yard work, and no GrammaJ - not even on the phone (bless her heart).

So here I am, just goofing off in between ibuprofen doses and haunting Facebook when I see that Person A is taking today off. Hey, what a coincidence, I'm taking today off too! Then I notice that Person B is also taking today off. So is Person C. Person D is complaining because she's working when everyone else is off and Person E states that he's probably attending the only college in the nation that has classes today.

Hmmmmm. What's going on? Did I miss a memo somewhere that said I was supposed to be off today? I looked more carefully at my calender. Lo and behold, today is Columbus Day.

Whatever that means. (and whoever cares...)

It also says that today is the day for all my Canadian friends (Hi Pea!) to celebrate Thanksgiving.

At least I have an inkling of what to do with THAT holiday! Looks like the girlies and I will add pumpkin pie baking to our non-school activites for the day. Wait. Is there any whipped cream in the fridge? We can't have pumpkin pie without whipped cream and I am NOT going to the store!

Yessssss! Score! and it doesn't even go bad until December!!

[Groovy does the pumpkin-pie-with-whipped-cream-Thanksgiving-Day-dance-of-joy... and hurts her stupid neck again. Owwww. Where's that ice pack?] 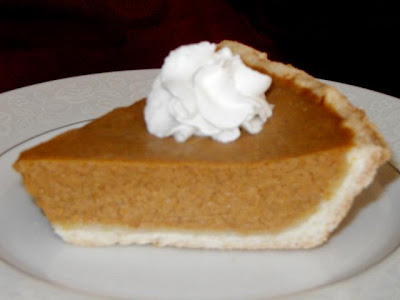 Disclaimer: That is not a picture of my pie. It's a photo I lifted from google images, but my pie will look quite similar, though the crust will be a wee bit higher. I will make it with real pumpkin that the girls grew in their 4-H garden. Yum!

That's Young Adult Works in Progress for those of you unfamiliar with the lingo.

I love both of my stories and I desperately want to finish them and submit them for publication.

Speaking of "finishing", that's my life theme right now: "Finish What You Start". I am working quite hard at either ditching projects permanently or FINISHing them. This is so foreign to my nature that Mulletman has so far remained a silent and skeptical watcher. I have been so bad at sticking with anything that he's waiting to see if I stick with my resolution to stick with things to the end.

What did I just say? I'm not sure either.

So far, so good. I started AND finished clearing the weeds from the veggie garden (that would be the veggie garden that never grows veggies because it's always full of dandelions - until now) AND mulched it with newspaper and straw. DONE! I pruned all the blueberry bushes and weeded underneath them. DONE! I painted all the portions of the house Mm asked me to paint. DONE! I've started little projects as gifts and not stopped until they were finished. DONE!

I'm even applying the concept to smaller chores by not letting myself (well, trying to not let myself) get distracted from a task until it's completed. NO. MORE. MULTI. TASKING.

I still have some work to do (let's not discuss the pile of undone mending upstairs), but I'll get there eventually.

But before I go I have to share with you that Girly-Girl was just elected secretary of our 4-H club. She was nominated for president AND for treasurer, but declined both of those positions. I think secretary is a good fit for her skills and talents. :D

And...the verdict is out on my neck: Apparently I have some bone spurs and narrowing. Eeeewww. Off the "real" doc on Wednesday so she can refer me out...
Posted by groovyoldlady at 12:52 PM

No more multi-tasking? Dear heavens, I'd never be able to survive.

Good luck with your Finishing goal!!

And, yeah, my garbage is out, I checked the mail and then wondered why the teenager across the street was mowing instead of attending school before I realized it was a holiday. LOL....

My mommy and daddy worked even though it was a holiday. In fact, they were really stressed yesterday and daddy had to take me for a walk even though it's mommy's responsibility during the week. I hope your tests go well.

I have been attempting to finish the pleothora of already started projects as well. I have a hallway that is primed but not painted. I painted one wee little space and ran out of paint. so my unfinished project is now an un-unfinished, tried to make it better but didn't, project. Hmmm... hope the rest of my list goes better. :)

Sorry you're not going to be Nanoing this year. I've written 5,000 words this week on another project. If only November were 10 weeks long I'd be fine.