We interrupt this nagging headache to bring you a much belated blog post:

Well folks, I am so far behind that I can't even remember where I'm heading. I had so many fun bloggy plans, but I've been sideswiped by GrammaJ's yard sale (she decided "we" were having one), a big boatload of ugly hormones, bad hair, and a weird neck/shoulder injury that arose from nowhere and is taking an ever-lovin' long time to heal up.

Nonetheless, I would be remiss if I didn't take a wee bit of time to pay tribute to our dear departed family member, Rebekah the hamster.

Sadly, Rebekah has passed on to that giant hamster ball in the sky...

If you'll recall, Rebekah and her twin sister Ruby just wrote a guest blog post a month or so ago...

Here they are at work on the keyboard; That's Rebekah on the right. I think. Actually, I never could tell them apart. However, Girly-Girl swears she can (could...*sniff*) identify them because one of them has (had...*sniff*) a little boo-boo on one of her toes.

Can you imagine being a human twin? A friend comes up, "I can't tell if you're Amanda or Miranda - Take off your shoes!" 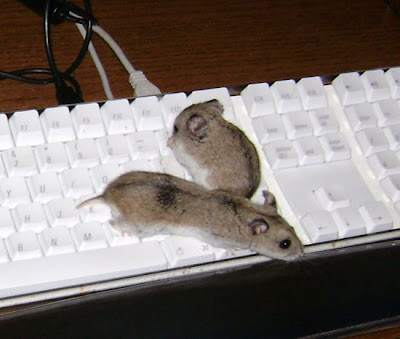 At any rate, a few weeks ago, one of the little furry gals started acting a wee bit weird. She was suddenly awake during much of the day while her sister slept. She ran and ran and RAN in the wheel and she climbed and leaped and startled and was just plain ole agitated and skittish. She also turned mean and bit anyone who touched her, so we stopped messing with her.

I did ask Funsocksgirl if she had ideas what might be wrong with the munchkin. FSG has owned many more hamsters, gerbils, mice, rats, and other furry beasts than you may want to hear about and is pretty much - at least in my book - an expert in rodent behavior.

Unfortunately, her only thought was that maybe we'd brought the scent of a cat into the house or something... She certainly did not expect death as the outcome of Rebekah's (assuming that's who it was!) manic behavior.

Sad to say, on September 18th I was upstairs reviewing a piano lesson with Silly-Head when Girly-Girl came running up the stairs and burst dramatically into the music room.

"Mom, one of the hamsters is DEAD!"

That pretty much pushed Bach to the back, if ya know what I mean.

Apparently, little Rebekah had been "gone" a while - she was just a stiff wad of fur and bones. So at least she wasn't limp and gross (been there, handled that!). After a few tears and hugs, we placed her in a toilet paper tube coffin and had a funeral in the back yard as we buried her at the edge of the leech field. The girls made this touching sign and gently placed some wild flowers to mark her grave. 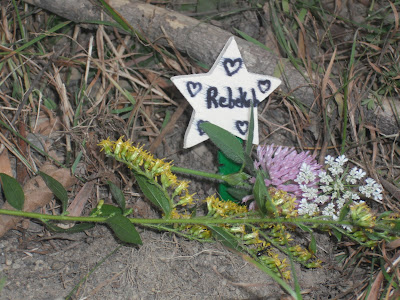 Then we caught some cool insects to euthenize and mount for science and went up to console Ruby (assuming that's who she is). Ruby was peacefully asleep and wasn't terribly thrilled at being comforted, but she was calm and sweet and didn't act at all like a manic hamser on the verge of death. In fact, she's adjusted quite well to living alone. The girls have also recovered quite nicely and are already planning what new pets to get when Ruby dies (assuming that's who she is).

So, Good-bye Rebekah. We loved you while you were here and we're sad that you're gone now, but our lives go on...until Ruby starts going berserk!
Posted by groovyoldlady at 6:39 PM

Oh, my, you've had a rough period here.

Your descriptions are so funny - poor Rebekah - if that's who she was!! That's really kinda scary - wonder if she had rabies or something.

As for how to tell which twin is which - I either look at the bottom of their shoes (they wear sizes) or I pull up shirts to see Emma's birth mark on her back.

Sure hope the neighborhood dogs leave her to rip. Ours didn't...if you know what I mean! Gross! I sure didn't want any kisses from her that day!

So sorry about the demise of ONE of the hampsters.

Reminds me of a little German poem my grandpa used to quote to us, it was also about twins whom no one could tell apart, so when one died, the other didn't know if he was "Hans who is living or Jacob who is dead!"

Yep - - - your style of hinting to YOUR hubby is EXACTLY how I hinted to get the tapestry!!! EXACTLY, except take out the words "I-pod"

So sorry about Rebekah's passing. She was a lovely guest blogger. I mentioned her in my latest blog post. I hope Rebekah didn't suffer and is at peace in hamster heaven.

RIP Rebekah (assuming that is who it was). So very sad. Especially the pic of the grave. I promise if I come around I will not dig her up.