Oh I was SO joking about joining the BooMama Before and After Party.

See, here was the plan: Mulletman took two weeks off of work for vacation in SEPTEMBER. And now all of you are wondering why I capitalized September. (You ARE wondering why, aren't you?) That's because I homeschool and because last year was a tough year and because I wanted to go great guns this year to make up for it so my girls will super geniuses before the age of ten. (As it is, I predict that they're going to be rather ordinary, like their mother!)

This, even though I haven't sent in the official State paperwork that was due August 31. You know, the paperwork that is filled out in triplicate and laying (lying?) in neat piles on top of my desk but that can't be sent in due to my failure to have Mrs. B (or R or C. Basically ANYONE who is a "real" teacher) review Girly-Girl's progress...yet. That paperwork?

The whole idea of taking a vacation in September left me with a bad taste in my mouth. September is when we're still excited about the new school year. Everything is new and fresh and FUN. We can still go outside and marvel over insects and caterpillars and fungus and flowers. The books have that sweet smell of newness, the pencils are sharp, and the erasers actually work without leaving ugly grey smudges all over your work. Our zeal is at a peak and we look forward to each day of learning. We stick to our schedule and thrive on the zenlike sameness and predictability.

However, if you take a vacation in September, it looks more like: School on Monday and Tuesday. Wednesday we shop and then spend the rest of the day trying to convince Girly-Girl that her new bike will NOT kill her even though it has gears and handbrakes. We are unsuuccessful. Thursday, Friday, and Saturday the girls are with the Grands while Mulletman and I camp and bike ride at Acadia National Park. Monday we try school and everyone is cranky because we can't remember those stinkin' ear parts and we've forgotten what happened in that last chapter about Louis Braille and we can't locate The Miracle Worker so we can watch it, as promised. Tuesday we have half-hearted lessons that end in tears because math is "so dumb" and because Girly-Girl "doesn't get" poetry. Wednesday I take GrammaJ for oral surgery and spend most of the day with her. Mulletman has the girls do piano and math and I try some language arts after I get home. In case ya didn't know, school in the afternoon is an oxymoron. Thursday all four of us head out to a State park to camp for three days. By the next Monday even Mulletman is going nuts and tries to get back to work early. Unfortunately, they don't need him and we get three more days of fun, but totally unsettled living.

Enjoyable? Yes, for the most part. Productive? Not even remotely. What makes it even stranger is - and this is the point of this post - we weren't supposed to be camping and bike riding and playing. We were supposed to be painting.

Months ago, Mulletman trotted over to Home Depot to look at guy stuff and came home with a paint chart. "Pick a stain for the house exterior," says he. "We're going to paint the house this Fall."

By "this Fall" he meant during his 2 week September vacation. And by "we" he meant himself and a REALLY TALL LADDER. Ok...and maybe me too. I'm great at serving lemonade during a painting foray.

Seriously, we have a HUGE house. Painting the exterior is a major undertaking, especially when none of us can agree on the color. Mulletman wants to move away from our brown to a deep barn red with forest green trim. We'd keep the white stucko white, of course.

Here's our huge, odd house as she stands right now: 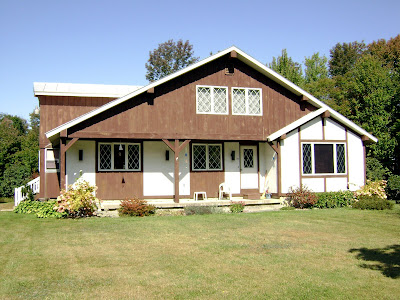 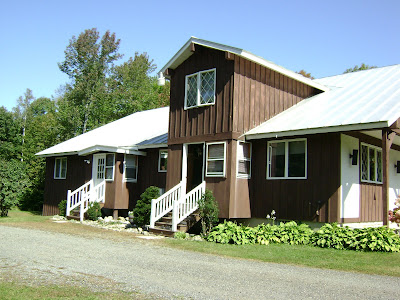 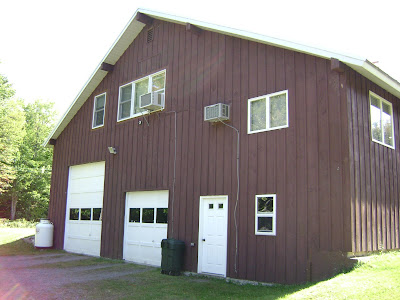 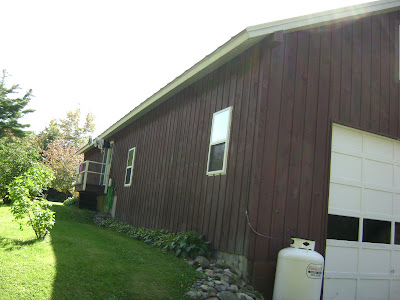 The girls HATE the red and green idea (even though we've seen a couple of similar chalet type houses that look lovely with that treatment). Girly-Girl insists on a tasteful terra cotta, Grammy likes the sable, and Silly-Head doesn't want us to paint it at all. She hates change! Grampy doesn't care about the color; He just rants about planting some evergreens so we don't have to look at the trailer next door all winter long. See this lovely view? Up to this past spring, that was all solid woods. 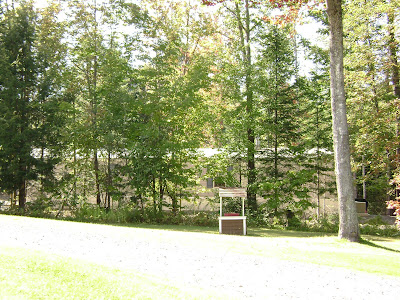 As for me? I kinda like the barn red, but the sable is nice too and I'm not opposed to terra cotta. So I'm no help at all, except that I know where we can get a deal on evergreens.

Indecision coupled with one too many late season camping trips caused us to miss the sale on exterior stain. Seeing as how stain's regular price is something like $4,000 per 5 gallon bucket, that was a bit of a deterrant. Then there's the fact that we have a number of rotted slats on the siding that need to be replaced; something which Mulletman dreads (for whatever reason). Worse yet, a couple of the eaves are so high that we need to rent/borrow scaffolding or a lift of some sort. Then there are the bats...

At any rate, all these factors, plus some internal turmoil over personal "stuff", caused my husband to act totally contrary to his natural go-to-it-and-get-it-done dispostion. He procrastinated.

All that is to say that I was planning on documenting our fabulous new paint job for this BooMama makeover extravaganza. And now I can't because it didn't happen - that's the paint job, not the BooMama thingy. That's still happening. Right now, in fact. Which puts me in the weird position of having to quickly find something to redo/reorganize/repaint/redecorate so that I can justify putting myself on BooMama's Mr. Linky and using her cute little button and all.

Well, I did do some before and after work on 2 shrubs that were threatening to take over our entryway. Unfortunately, I never took any photos of the before, so you'll have to take my word that they were BIG and they were BAD, especially that one on the right. In fact that one was SO BIG and SO BAD that it took me 2 and 1/2 hours of clipping, sawing, pulling, wrenching, and maniacally laughing to get it down to this puny, malnourished, abused looking state. However, both shrubs have been subdued now. 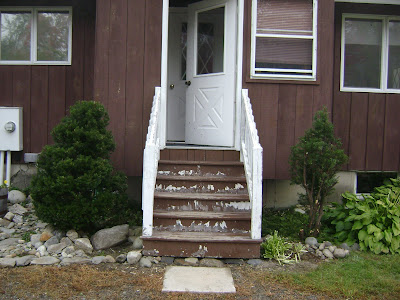 One result of all this hard work is that my back has also been subdued and I've been spending a considerable amount of time with my chiropractor so he can fix it. He's been clipping, sawing, pulling, wrenching, and maniacally laughing his way to the bank.

OK, now it's time for you to head over to BooMama's and see some REAL Before and After articles. Don't forget to bring some munchies. After all, this is a par-tay!
Posted by groovyoldlady at 7:10 AM

I hope your chiropractor is cute since you two are spending so much time together. Ha! Just kidding. Your bushes look fabulous and I am with you on the paint job. What a job that will be! Blessings to you.

At least you had plans and that's what counts.

Just think--you have bloggy material for a later date when it happens! : )

I know how plans can be thwarted- happens to me all the time!

And my oldest had the same qualms at first about her breaks being on the handle bars...it completely unnerved her for the first couple days!

I actually participated in Boomama's thing today! But mine's a bit of a cheat because I didn't post before pictures...which kind of defeats the purpose of the name. I hope she doesn't de- link me! ;)

Wow, that is indeed a big house! And interesting! And needs lots and lots of paint. I hate painting! DC has done ours twice - bless his heart. But it's not nearly that big.

I noticed the steps right away - the wrestling with the bushes sounds painful. Good for you for accomplishing that!

I think I told you that I have all of these "before" pictures of my future projects - mostly in the kitchen. YUCK! I can't wait to have "after" pictures, and to decide whether or not I will fess up to the befores!

Have a wonderful week-end.

I can relate! We painted our house (check out the before/afters) this summer but we had been thinking about it for over a year. We had a lot of the same problems, not to mention the cost! Did you know that you can play with colors on the Sherwin Williams website? It gives you a little bit of an idea what a color looks like on a house, I spent a lot of time on that site.

This is the first time to your blog, I love your sense of humor! I am bookmarking and coming back.

I'm happy for your motivation and determination! Give time and all will be well. As a lady who just wrestled bushes, I commend you for your work! Your shrubs look great!

I absolutely love your house. Painting it will be a huge undertaking, but if anyone can do it, the Groovies can. Hope your back feels better!

I LOVE YOUR HOUSE! It looks so rural and peaceful. I'm sure it will get painted eventually but it sure is BIG!!!

Great house! It's looks so -- homey and fun!

Tell Mulletman that red and green will make your chalet look like a Christmas card all year long. Great in December!

We've lived here almost 14 years and have yet to get around to painting the laundry door. I bought the paint two years ago. I think. Where is it?

My daughter also hates change. I painted the front door blue about eight years ago and she's still mad.

Good luck with it all. I think it looks great, by the way. Leave it alone and just plant the trees.