Because I am SO clever with the titles...

Here's a few pics from all the craziness of the week. Funsocksgirl took a million more, so don't be surprised if I post some of those later, especially since she is a much better photographer than I.

You can double click on any of the photos to enlarge them.

Here's the pretty 50th anniversary cake I made for the folks. That cake top is the same one that was on their cake back in 1958! 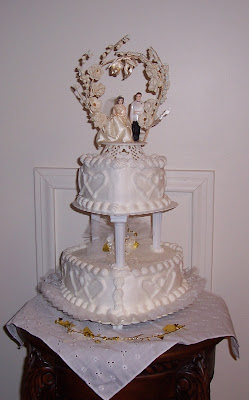 And here are the folks watching an e-card from Aunt C. The ecard is posted right after the pics. It's MUCH funnier with their faces in it! Unfortunately, I have not the internet savvy to post it thusly. 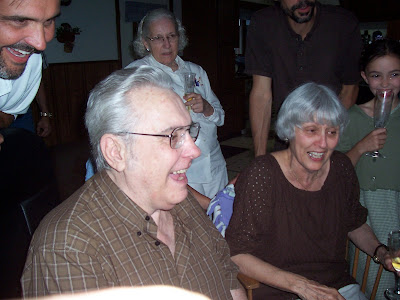 I'll post a better anniversary photo of the folks later after I steal one from Funsocksgirl.

Here's the OTHER anniversary couple: J-Man and Funsocksgirl, 2 years and going strong! 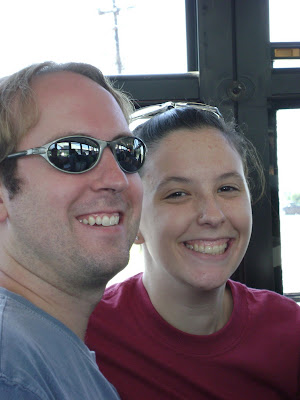 And here are all our guests of honor: 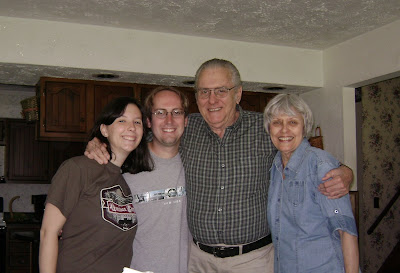 Lastly, for now, so I don't bore you into a puddle of drool, here's Mulletman and I and all the kids minus Scout. He (Scout) was actually supposed to be home, but they cancelled his military leave so he could throw fruit at people's heads during a training exercise.

Wait...don't tell anyone you read that here. I think it's some sort of national secret. 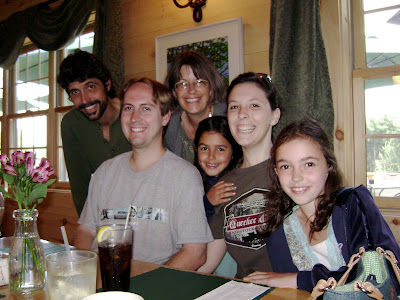 Posted by groovyoldlady at 5:15 PM

(great job on the cake btw)

Oh my - - - after seeing your cake, I'm a little embarrassed that I posted pictures of mine!!!! (yours is better)

I believe your parents' faces ARE on the video card. Very cute.

Oh Groovy! That cake looks like a beautiful dream AND you made it. You are one talented lady. Great family photo.

GROOVY - You're still alive and kicking! I haven't been by your blog in so long. I've missed your wittiness!

What a gorgeous cake!! Love taht the top is the original.

I like the looks on their faces as they watch the e-card even better than the card itself! They're cute.

Excellent pictures and that cake is beautiful.

The cake is just stunning, Groovy!!!

Love the family pictures!
Congrats again to them for 50 years!!!

What a fun and beautiful family you have. That JibJab video was too much! Your cake looks great!

I can always come here and laugh and laugh. Thank you for brightening up (and lightening up) the blog world! I could learn a thing or two from you!!
Your parents' faces are on the card, and as a former rhythmic gymnast, this was priceless.
Blessings,
Michelle

Wow, you make great cakes! Impressive! That e-card is hilarious! How fun!

Now have a great relaxing day!

How lovely your family are. You are truly blessed. And that cake - I am bowing in awe as I type. Amazing. What a talented lady you are!