Some Sad News, Some Happy News, and Some S.A.D. News

OK folks, I covet your prayers for Mr. Snowblower (even though coveting is a sin). 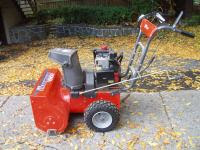 He's in the snowblower hospital being evaluated for major surgery or perhaps even an assisted suicide.

Yes, I know he's a blow hard, but he's an intregal part of our Groovy family here and we wouldn't know what to do without him, especialy in the winter! In MAINE!

And it snowed all night last night.

AND it's supposed to snow more today.

AND Mulletman's brother, Uncle Pickle-Nose is supposed to be flying in from California today for a Christmas visit.

Where'd I put the phone number of Plow Guy? 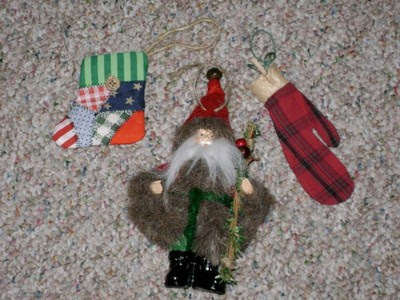 Those cute little ornaments are from Terri at Lakewood Manor as part of Kathleen's Christmas ornament swap. Thank you, Terri!

And now I have to apologize that Terri does not yet have her ornaments from me. I was feeling quite guilty about this until yesterday. I have been having a truly horrible time trying accomplish anything this month.

I've experienced the symptoms of S.A.D. for several years now and about 3 years ago I started a regimen of taking St. John's Wort from early October through mid-March. That helped me tremendously. Until this year. This year it's really bad.

I have trouble getting up in the morning. I am EASILY overwhelmed. I feel exhausted all the time. I fight constantly with negative thoughts and feelings that people said or did things "on purpose". I, who am usually obnoxiously optimistic, struggle with hopelessness. I don't want to go anywhere or do anything. I'm having a tough time keeping the girls rolling with school. I'm completely undone emotionally by two simple sewing projects - one of them being the ornaments I'm making for Terri and my 2 pay-it-forward gals. I want to eat all the time and if Mulletman wasn't holding me accountable I sure as heck would not be working out several times a week! (Good thing I am or I would have gained several pounds by now!) I don't want to clean my house and the thought of fixing food for Christmas makes me want to hide in a closet until everyone goes away.

I was beating myself up over all this until I realized that it's the S.A.D. and that it is, indeed, worse this year. I wonder if this has anything to do with my sun "allergy" and my need to stay out of the sun in the summer. Usually, Mainers are out and about soaking up all the rays they can in the warmer months, and I haven't been able to do that this past two years.

Maybe I could get a research grant to check the connection between Polymorphic Light Eruption and S.A.D.!

So ladies, I WILL get those ornaments out to you, but please be patient with me...

In the meantime, Mulletman and I are looking into purchasing a Light Therapy Box that is used for treating S.A.D. They're quite expensive though, so I'm seeing if our insurance will pay the price tag for us. Of course that means I'll need a doctor's visit and an order to use one. And they'll probably want me to have a complete physical and won't be able to schedule me in until March and by then I'll be back to my happy self and won't need the light box and it will all be moot.

In other, happier news: After this Saturday, the daylight hours start getting longer again!
Posted by groovyoldlady at 6:45 AM

Ah, Groovy... I'm right there with you. I can recall times where I curled up in little patches of sunlight like a cat in the winter. It can be so bad... And, come to think of it, I wonder if that's why I've been so depressed the last couple of weeks. Poor hubby wants to fix things, and there isn't anything to fix.

Hang in there... and, hey, I don't need the ornaments until next year now anyway.

Hmmm, wonder if that is what I am dealing with too. I'll have to look into the St. John's wort thing. Listen, I am already excited about the very idea that you are sewing something for me... no one ever makes me anything from scratch so I am like a little kid here... I will be as excited for the ornaments after christmas as I will be before christmas... so give yourself a little pat and say, I am giving something very special for Terri and she is soooo excited about it!

Ya'll are so sweet; you made Groovy cry!

Groovy!!!! I'm finally catching up with you!!! I know, I know, I've been a horrible commentator of late but really, someone stole a few hours out of the days lately!! Uh huh, it's true! I've just read your last few posts and oh boy, I want to try making that candy...I've got lots of "bad" peanut butter so I'm all set! lol Oh dear, I do hope Mr. Snowblower will survive...as you say, he's much needed during the winter. I don't know what we would do without ours...cry I guess instead of shoveling by hand! lol I'm so sorry to hear that you haven't been feeling well at all due to the SAD...so many people have that, my mom included. She gets so depressed during the winter months and I really have to watch her and make sure she takes her medication. I'd like for her to invest in one of those lights. Sending you big hugs!!! xoxo

S.A.D. is a tough thing to deal with sister Groovy Baby! i will pray for you. Poor Mr. Snowblower but I still think he needs a swift kick in the drawers! Do snowblowers wear drawers?

Have you checked into Vitamin D? Especially since you don't get much sunshine. I started taking it this fall and it's dramatically helped the bipolar mood swings. Anyway, research it and think/pray about it. (It's also pretty cheap, and I started feeling perkier within a week....it's about $4 for a bottle that lasts a month)

Poor Mr. Snowblower - or poor Groovy and Mulletman! We were blessed when we got home from our trip to find a neighbor boy had tried out their new blower on our driveway - 4 snows while we were gone, so we were wondering how we'd get into the garage!

I'm sorry you're sad with SAD. I would be there with you if I didn't live where the sun shines most every day. If it goes away for 3 days, I feel deprived and feel like I've moved to Seattle or someplace like that. I'm spoiled, I know. I hope my pictures of Hawaii help instead of hurt!

S.A.D. is real. I hope that you find some solution, like the light therapy box. B vitamins can help, especially B-6.

Or, since your two current problems have to do with snow and sunshine, maybe you should relocate where there isn't any snow and there is sunshine. Just a thought.

Oh Groovy, speaking from someone who deals with bouts of anxiety a touch of S.A.D., I can so relate. And a good friend of mine has S.A.D. in a strong way...she has developed it in just the past few years. She feels like you through the winter but in the summer she is happy and energetic!
I'll be saying a prayer for you, dear friend...

Groovy, I'm so sorry to hear about your S.A.D. Being a fellow sufferer of depression-type issues, I can give you my deepest sympathy and understanding. I know that overwhelmed feeling all too well, and it's not good.

I hope you can get the lightbox, and even if they can't get you in until March, write down how you're feeling and when you feel your worst. Then when you go in to see the doctor, you can say, "I feel great now, but come winter, look out!" You'll have the list to remind you. Fortunately, doctor's know about S.A.D., so it shouldn't be too hard to get it sorted out.

I've got it bad too, especially this year! Most years I can handle it and get through it but this year I was thinking the same thing-- time for a light box!

Or, we could share a condo in Florida-- whaddya think? You get January and I get February and we share it through March...

How are you doing?? I have been thinking and praying for you. The more I find out about S.A.D. the more I hope it is NOT what I have!