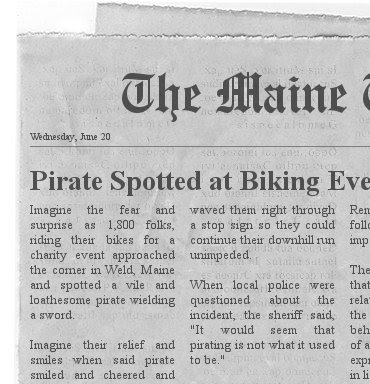 Please forgive my dearth of photos. I got a few at the start and one at my first corner, then I was either too busy or too tired to take any more!

2,200 bikers were registered for the ride.

1,750 bikers actually followed through and rode 180 miles over a hilly and scenic route from Sunday River Ski Resort near Bethel, Maine to Owls Head Lighthouse near Rockland, Maine.

There were 390 volunteers throughout the weekend. We all had terrific green volunteer shirts, but many of us on the route wore costumes to make the Trekkers smile. There were 2 or 3 clowns, a giant duck, and, naturally, a traffic pirate. The pic is shadowy, but it was the best we could do at the time. Later in the very hot, sunny day I lost the belt and green shirt and, Ms. Karen will pleased to know, I donned a tremendously piratical orange safety vest. 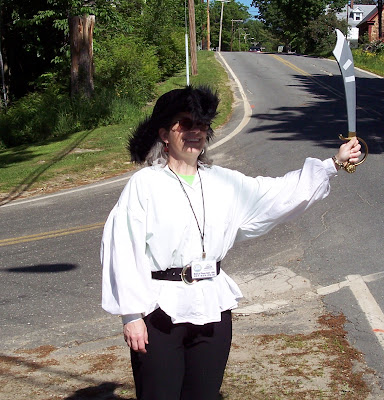 The youngest riders were 7 years-old (on tandem bikes with a parent) and the eldest rider was 79. Yes, he rode the whole way and he looked great at the end!

The coolest bike was definitely the 4-seater tandem bike that one family rode the entire distance. They all had matching bike shirts; VERY groovy!

Mulletman and I managed to raise $991. The Trek as a whole raised over 1.1 million dollars to fight the tobacco industry and try to improve air quality in Maine and New England. (I am wheezing as I write this!)

The coolest story was that of a gentleman on our Loan Rangers team. He was obese and in poor health, so he made a tremendous effort and began dieting and exercising. Over the past year he lost over 100 pounds!

Unfortunately, his past caught up with him and in March he had a heart attack.

Then in April he had cancer surgery.

Then in June he rode his bike 180 miles and looked and felt great! See the cheerful Loan Ranger smiling at the camera? That's him! 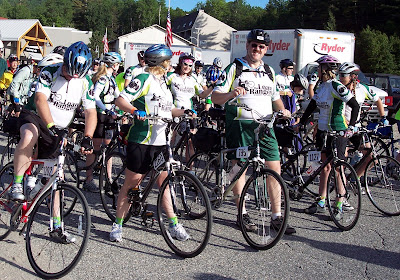 ...Stay Tuned for Part Two!
Posted by groovyoldlady at 7:45 AM

What an adventure you had...pirates and all!

Beautiful! Oh...sorry, I forgot who I was talking to--"GROOVY!!!" Can't wait for Part Two.

Great report. You look wonderful as a pirate. Clever you :o) What do I expect......you're so groovy!!!
Susan

Amazing about the man who rode after a heart attack AND cancer surgery. Woo for him!!

Now that's a groovy pirate if I ever saw one...hehe! You looked great! I'm so glad the bike run went so well...I loved the story of that one guy who went through so much and now has done the 180 mile bike run...he's such an inspriation to never give up!! xox

Thanks for sharing with us! You were such a cute pirate! Best I've seen in a long time!

I'm so happy for the gentleman who lost those 100#. God love his heart! What an inspiration he must have been to so many.

Great report! Hehe you look darling as a priate.


You may also find it useful to visit my website: http://www.healthopts.com