When Funsocksgirl and Scout were wee little tots, I directed the preschool choir at the Southern Baptist church we attended in central Missouri. I taught basic music skills, Bible truths, movement, and pre-reading. It was such a fun job!

Then, right after my hour with the little tykes, I spent an hour in choir practice with the grown-ups. It was a group of 20-25 wonderful, godly adults who challenged me and helped me mature. We sang fabulous music and I always enjoyed my time there.

And now, as many of you know, the girls and I, along with Early-Bird and sundry homeschooled children, visit a nursing home on a weekly basis. It was a venture that I had to grow into, but now...I LOVE it. The people there are so special to me. I so enjoy hearing their stories (over and over again), making them smile and singing with them. However, things there can be a little on the slow and monotonous and boring side of life.

Close to 11:00 am the residents begin to trickle into the tastefully decorated dining room for a little "hang-out" time before their luncheon. This is when we usually come to visit.

Last week a group of "the Girls" were at one table chatting with Early-Bird when a little old lady at the next table suddenly got agitated. The home has 2 lovely housecats and apparently Bertha did NOT want some filthy feline anywhere her table when she was preparing to eat. She began to shout, "That cat better not come near MY table. They're dirty! They shouldn't be allowed in here around the food!"

"The Girls" glared at her and told her to shut up

Then everyone ignored her. Everyone except the cat, of course. You know cats... If they know you're a cat hater, then they want to rub all over you. I think it gives them some sort of perverse pleasure. In this case, the cat also had an apparent death wish because she was headed for a very unstrung and focused 102 year-old germaphobe with a CANE.

The cat wove her way toward Bertha, rubbing provocatively against the walkers and table legs.

Bertha was ready for her. She raised both her cane and her voice, "You'd better stay away or I'll club you!" She started waving the cane as she half rose from her chair, her eyes wild.

"The Girls", suddenly alarmed, began to holler at her and threaten her, "Sit down, you old biddy!" "Somebody stop her!" "You hit that cat and I'll club YOU!" None of them actually got out of their chairs, but at least two of them kind of leaned forward in their urgency.

One of the employees actually had to intervene by removing the cat and the old men at the next table snickered and tittered as they watched the action, eyes aglow.

I'm telling you, it was pert near a riot!

We tried to end that exciting visit by gathering in the middle of the dining hall to sing old favorites. As we were belting out "Daisy, Daisy" I could hear an angry, grumbling behind me. When we finished the song I turned to see who was so grouchy. It was Bertha. Now that the cat had been removed from room, her focus had been diverted from fur to hair. All our girls had long hair...and it was in the dining room.

Bertha scowled and waved her hand toward the youngsters, "They shouldn't be in here near my food with that hair! You'd better do something about that next time!"

I smiled and nodded and we went on singing. After a few moments, Early-Bird nudged me and glanced back over her shoulder. I looked back and saw that Bertha had taken her paper placemat and wrapped it around her entire place setting so that it would be safe from all that hair.

And then there was today. Bertha was cheerful this time and she and I had a perfectly lovely conversation. She told me she was 93-94 years-old (she's 102) and that her mother had been in the same nursing home, but had died 6 weeks ago. Bertha has 4 kids, 2 boys and 2 girls and...no, wait. She has 5 children, but they're all grown up now and she can't remember their names. Her son-in-law owns "that place" but she can't remember his name either.

Anyhoo, after our little chat it was time for singing. This time it was me and Early-bird, and 5 children - some ours and some borrowed. We sang "Red River Valley" and "You are My Sunshine" and "This Old Man". Everyone was in a good mood and they were all singing along.

And then things took a nasty turn for the worse.

The dining room was nearly full, but one more old man toddled up to the guy table. He looked at the chair in front of him and, to his dismay, noticed there was someone sitting in it.

Sitting in his chair.

Fortunately, two staff members were right there and stepped in before the walker wiped out someone's great grampy. The other old men at the table snickered and tittered as they watched the action, eyes aglow. The old deaf fellow in the bright pink Izod shirt seemed especially delighted by the row.

It was a rather awkward situation for us with the kids and all. So we sought to turn everyone's attention from the mêlée. We launched into "I've Been Working on the Railroad". It's long, it's cheerful and the folks there generally enjoy singing it with us. Happily, everyone sang lustily and the fight was forgotten in a matter of moments.

Look, Dear. I don't have much of a nose either! 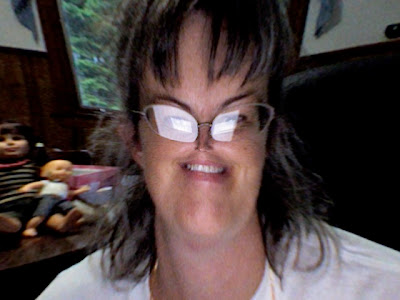 Posted by groovyoldlady at 4:44 PM

I have just sprayed my monitor and keyboard with coffee, thank you very much. After working with kindergartners last year, I can see some things just never change.

WV: beeri. I'm beeri worried what kind of old person I'll be. Will I wrap my place setting to guard against hair, or will I be tossing walkers like some ancient Xena?

Oh, what a blessing you are to those old people. Even with your daughters' aggressive and dirty hair.

I hope to end up in a nursing home with my old friends from college. It would be just like back when we were in the dorm, only we couldn't make a Krispy Kreme run when the doughnuts are hot. Not likely, I know, since we are all married and live in different states, but it's a way to cope with thinking about it. In fact, I'm convinced it will be fun and will make myself believe that my fellow dorm-mates are my old friends. For as long as I can remember who I am.

Karen, I'm betting you'll be a walker thrower, but never a cat whacker.

Ann, I LOVE your plans!

I could read your stuff all day! You are just so darn-tootin' talented! Loved your use of the word "tittering" and "gesticulating".

But bless your hearts for this ministry you're involved in. the elderly get so overlooked manytimes.

There's a kid in everyone. Sometimes that's a good quality, and sometimes it's ugly!

Oh my! I remember those days of flying walkers, cat thumpers and we even had a spitter.
Is she still there?
When E and I would visit the nursing home this lady would creep along with her walker and spit. I don't mean a little "patowee" it was like a snorkley, phlemgy kaflunky spit. Bluck! E and I would walk around it and our little Ann would shake her head and say " I can't believe they let such uncivilized people live here". To make matters worse... Ms. Phlegm sat across from Ann at the dinner table. :)
So many interesting stories to be told when you volunteer at the nursing home.

No spitter, FZ, but there is a hilarious silverware hoarder. She carries around spoons and forks because "They" tell her to.

Wow I'm impressed. Who'd have thought you could get glasses for such a small nose.

Bear...I like your version best. It is short and get's right to the heart of the matter without alot of unecessary drama. Thank you for your thoughtful input.

Oops..I left the message for Bear on the wrong post. Silly me!